In a shoot-out with his suspect he’s wounded and calls the NYC PD for backup. When he sees NYPD Detective KC Daviau and other uniformed officers slipping into the darkness from the subway platform he’s relieved, but to his surprise he’s met with resistance and disrespect by Detective Daviau. Against his objections, KC takes custody of the evidence and leaves the scene. 
When your good intentions pave the road to hell, only love could save you... This could be the tagline for Bill Blodgett's Love, Lies, and Bad Guys.

One of the pluses of this story is represented by the characters and the balance between romance and suspense. If the suspense has its roots in older events which caused the heroine to believe in people she should have knowns that are untrustful, the romance is new, but despite its fast development is still credible. Some could consider that is not, but that will be their problem as many real and fictional cases prove the time could be irrelevant for true love.

Another plus is the good rhythm in which everything happens and the way in which the events are mixed. The pages flow rapidly.

There are some stereotypes but they were addressed by the respective characters themselves and so part of the negative effects was avoided. There are also addressed environment protection matters and what are the normal, acceptable limits in doing that. Crossing the lines brings danger at different levels. These are the core of the suspense part and, in the end, will put to the test the new relationship.

Whilst the plot becomes clear quickly and knowing that the genre asks for a HEA, the author managed to keep me curious about how he'll manage things. There are several aspects that I would have wanted differently, still Love, Lies, and Bad Guys was a pleasant way to spend an afternoon. 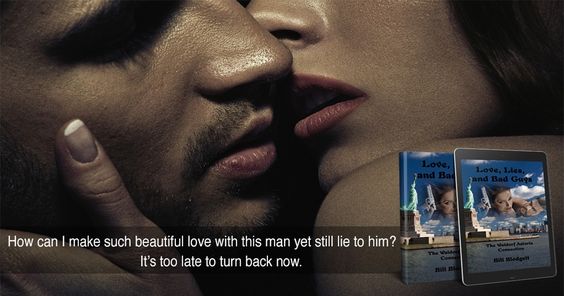 When US Marshal Jay Stonewalker sees a possible terrorist comment in a chatroom frequented by anti-government radicals suggesting a nuclear threat to New York City, specifically the Waldorf Astoria Hotel, he can’t get it out of his mind. Against his boss’s orders he heads off to NYC to investigate on his own time. While there he follows a suspicious character into a secluded recess of the New York Subway system and foils what he believes is the terrorist event.

In a shoot-out with his suspect he’s wounded and calls the NYC PD for backup. When he sees NYPD Detective KC Daviau and other uniformed officers slipping into the darkness from the subway platform he’s relieved, but to his surprise he’s met with resistance and disrespect by Detective Daviau. Against his objections, KC takes custody of the evidence and leaves the scene.

When Jay asks an officer if she is always that way he’s told that, “Since her parents died, she’s been… let’s say… a little cold.” When they are assigned to work the case together, KC’s icy exterior soon begins to melt away as they begin to fall for each other, but KC has to hold back. She has a dark secret and knows he can’t ever know her truths because if he did he would hate her just as she hates herself for what she’s about to do.

About the author:
I still live in the community where I met and married my lovely wife, Janice. Actually, she lived around the corner from me and we both ignored each other until our teen years when the hormone thing kicked in and we suddenly realized that the cute little girl skipping rope and that goofy boy riding a bike had both grown up.

I enjoy hiking, kayaking, camping with my family, golfing, making candles, and restoring my antique European sports car, a 1972 MGB.

They say to write from what you know, so I do. I write of love, life and relationships. In addition to the romantic plot we all expect from a Romance novel all of my books deal with a real-world issue as a sub-plot that we all have had to deal in some manner in life, but not in a preachy way. I find that including this sort of theme helps me identify with my characters on a personal level. My hope is that the reader will also feel that connection with my characters.

I have four other published novels. Dead Or A Lie and Saint’s Sword are vampire Romances. Unrequited is a contemporary novel with romantic elements and received 4 stars from Romantic Times Book Review magazine. The Last Prejudice is a family saga that deals with the issues a family must address when a family member comes out.

I have been a member of the RWA and the Central New York Romance Writers since 2004 and have held various posts in my local group. By day I am a construction inspector for an engineering company.

Thanks for hosting and thank you for your review.

Thanks so much for both the book description and giveaway as well. I enjoy hearing about another good book.

Did you design the cover of your book?

Great review, thanks for sharing!

Yes, Bernie, I made the cover. It took me 4 or 5 attempts before I settled on this one

You're welcome, James.Good luck on the contest.

Thank you, Victoria. I'm happy with the review too!

Great review! Thank you for participating in the tour.

WOW! So many nice comments! Thank you Rita, Edgar. Caryl and Dale!

Congrats on your books release. I hope that it a success?