he doesn't care... The Atlantis Bloodline by C.A. Gray

"Fantasy and suspense twist this story into an interesting tale. Each bit of the puzzle shows a cruel world with a spark of hope. The Atlantis Bloodline mixes mythology with romance. It’s a real page-turner. I haven’t read anything like this before and I enjoyed how the story unfolds." D.M., Goodreads 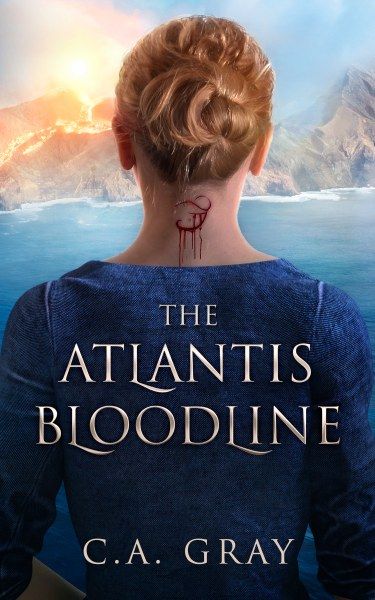 When sweet Ada Edwards meets the mysterious Kaison Hughes, lead singer of the biggest band in the world, she can't understand what he sees in her. Despite everyone's warnings about him, she's rapidly falling in love. But it's obvious he has a secret, and he's not all he appears to be.

Kai's life isn't his own, and his fame isn't the half of it. As a member of a secret organization known as the Elioud, descended from the Atlantean daughters of the Pleiades, he's been commissioned with a task: to reintegrate the lost line of Maia into their ranks. It just so happens that Ada is the one they've been looking for. He doesn't know what they intend to do to her, and he doesn't care. All he wants is the prize for a successful mission: one unqualified wish, which he intends to spend on his beloved sister's freedom.

There's just one problem: Kai's falling in love with Ada, too.

About the author:
C.A. Gray is the author of three YA Amazon bestselling trilogies: PIERCING THE VEIL (magic and quantum physics meet Arthurian legends), THE LIBERTY BOX (dystopian metaphysics and mind control technology), and UNCANNY VALLEY (dystopian coming-of-age with neuroscience and super intelligent A.I). She starts with some scientific concept that she's interested in learning more about herself, and then creates lots of epic chaos and high-stakes action to go along with it. Her stories are free of gratuitous violence, language, and sexual content, and she abhors depressing endings... but they're not all kittens and rainbows either! She also listens to and reviews audiobooks on her website (www.authorcagray.com), Goodreads, Instagram, and on her podcast, Clean Audiobook Reviews, where she also occasionally interviews other authors.

By day, C.A. Gray practices naturopathic medicine, podcasts, and writes medical non-fiction under her maiden name (Lauren Deville). She lives in Tucson, AZ with her husband Frank, and together they maintain an occasionally contentious film review blog (under her real name: Lauren Baden. Three names. Yes.) She's kind of the queen of multitasking--so in her spare time, she creates whatever meals or crafts she found most recently on Pinterest, drinks lots of coffee (Aeropress btw) and occasional wine (reds--and she saves the corks for craft projects), works out (while listening to audiobooks), and studies the Bible (about half of the podcasts on Christian Natural Health are scripture meditations). ...She does sleep, too.

Join her newsletter for best-of-the-month reads, freebies and giveaway information, as well as new releases! http://eepurl.com/F3rof

I like the cover. It is very well done with good colors and graphics.

This one sounds good to me!

Great colors, and peaks my interest. I like the cover.

The cover looks good. I enjoyed the excerpt.

This Cover caught my attention. I know one shouldn't judge a book by it's cover, but this one got me to read the excerpt. So now the book is on my list. :)

That is a very interesting cover. I'm in.

hmm the cover... something is wrong in Atlantis?