how far she’s willing to go to do what’s right? Paragon by Shauna Alderson

"This book has everything I love: mystery, romance, strong characters, and a great plot! Just when I thought I had it figured out, something else changed; it really kept me on my toes. Eddy and Neil are both frustrating at times, but I think Randi has a good head on her and will make the best choice." Jennifer M., Goodreads 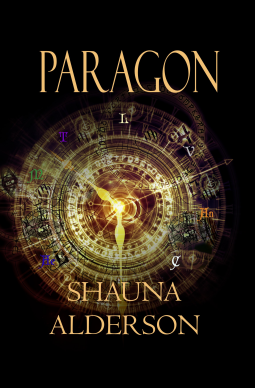 Now that high school is over, Randi just wants to live her quiet life in her little town, but it doesn’t feel right without her friends there. Ever the daredevils, they’ve gone to seek adventure in the capital city of Grandin, and Randi can’t help but feel left behind. Not to mention she definitely can’t stop thinking about that kiss she and Eddy shared before he left.

When Randi discovers a mysterious mark on her skin that matches an illustration in “A Handbook on Paragonhood”, she’s thrown into a world of powerful gods and ancient magic that she thought only existed in the myths. She’ll have to step out of her comfort zone—and into the dangerous streets of Grandin—to find a way to protect herself and the people she loves.

Randi’s not the only one with a secret, though, and she finds herself questioning who she can trust. Randi will have to wrestle with what it means to be a Paragon and how far she’s willing to go to do what’s right.

With the fate of the world on the line, can she live up to being one of the chosen?

A rumble downstairs tells me my folks are pulling into the garage. I gently set Barnaby back on the pillow and pick up the lotion I bought earlier. In the bathroom across the hall, I strip off my dress, cringing at the sight of the spider bite, now haloed in red. It looks infected and feels hot when I touch it. What if the spider that bit me was venomous?

I peer closer, stretching the skin on my left ribs. The center’s a bit swollen, although it’s not white, which is a good sign. But there’s something strange about the red ring surrounding it. Wait ... no. Not a ring. The red is scratched into my skin in a bunch of tiny lines.

Not a spider bite.

“Heptagram-shaped ... approximately half the size of one’s pinky fingernail, red-brown in color, hot to the touch.”

My knees give and I barely catch myself on the counter. It can’t be. Those are myths. The marks aren’t real. But what if—

Stop. Calm down. Giselle and Howard both mentioned hunters—that’s why I’m jumping to conclusions. And I wouldn’t even be considering it if it weren’t for that book.

I hurry across the hall to my room. I pull a dozen or so hairstyling magazines off my bookshelf, revealing the worn, leather-bound book tucked behind them. A Handbook on Paragonhood. Eddy lent it to me because I’ve always loved the myths. But that’s all they are. No one takes the stories seriously except hunters.

About the author:
Shauna Alderson began writing teen fantasy even before she was a teen. After she “grew up", she completed creative writing courses (and a BA in Development Studies) at the University of Calgary. When not reading or writing, she can usually be found teaching ESL, composing on the piano, creating art, or volunteering abroad. She also enjoys dessert, Studio Ghibli films, and being the silliest person she knows.

Thanks so much for hosting, CCAM and GZM! I'll be at work for most of the day, but I'll stop by again in the evening :)

What are your favourite mythical books that you've read?

I absolutely LOVE this cover. Awesome

Thanks for the opportunity to win! Awesome cover

I love the cover. It has awesome graphics and colors.

I enjoyed the excerpt.

Thanks, everyone! I'm not sure how to respond to you all individually but I'm glad you like the cover :D The publisher did a really nice job with it!

The cover is absolutely eye-catching!!

The excerpt is interesting, thank you for sharing.

The cover is fantastic and the storyline sounds like a adventurous read. Thanks for sharing. Best wishes to the author on the new release.

What is the book that so inspired you, to make you want to be an author?

Mya, there wasn't actually any particular book. Strangely enough, it was the TV shows I was watching around Grade 3 that inspired me. I watched one too many "filler episodes" in kids' cartoons, and that made me want to create a better storyline than what I was seeing!

Books looks great! Where is your fave place to read? Thank you

Tatertot374, thanks so much! My favourite place to read is in a comfy chair I have beside my bed, all alone in my room. I hate being distracted :D What about yours?

I really like the eye catching jewel tones infused in the cover.

I can't wait to read this!

The book cover is interesting and catches your attention.