to escape... or not? Skyclyffe by Z. Moss

Before long, Rex will be forced to decide whether to escape, or if Skyclyffe and its secret wonders are worth never stepping foot on Earth again. 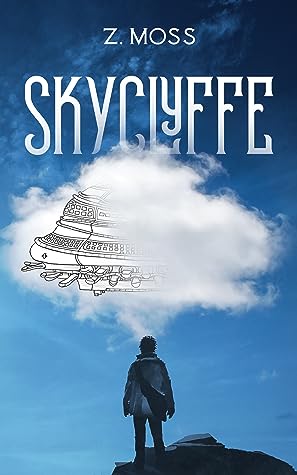 Rex Bright enjoys drawing in notebooks and dreaming. He’s thirteen, and his life is ordinary. Until he sees a face in a cloud which changes everything.

Rex glimpses the girl from an airplane window while travelling to his aunt and uncle’s farm for the summer. Her features are so perfect, Rex can’t believe she’s only vapor. But Cloud Girl is real.

A week later, Skyclyffe, a mysterious airship cloaked in a cumulus, abducts Rex and his family. The captors expect the Brights to live in their flying city forever. And, although he’s kidnapped, Rex loves the craft filled with robots, scientific discoveries, and silvery-white beings.

Before long, Rex will be forced to decide whether to escape, or if Skyclyffe and its secret wonders are worth never stepping foot on Earth again.

Rex shook on the inside like a mouse who’d realized he was about to become a snake’s lunch. His mom disembarked first and smiled, encouraging him to follow her. Radar jumped down, skidding on the concrete floor. Once Old Fart emerged, they stationed themselves in front of the wing, Dan and Sue flanking Rex and the dog.

Now that Rex could see, three extraordinary things caught his attention: a massive machine with a long articulating gun, robots zooming by … and a pirate.

Yes, a pirate stood with the others, dressed in black, including a swashbuckling coat and an outrageous hat. His plumed tricorn was overshadowed only by a beard that radiated from his chin, twisting into many points so it resembled a wild, upside-down crown. Either the young man left a play still in his acting wardrobe or had special needs, so the older adults let him walk around in his ridiculous getup.

The sea rover cleared his throat.

“Welcome aboard, Bert, Susan, Daniel, and Ann—” He halted then looked to the person on his left. She whispered something into his ear. “Holy catfish! Why wasn’t I informed?” The woman bowed her head as she muttered more words. “Oh, I see. Well, nothing we can do now.” He turned back to the Brights and raised his arm in a flourish. “I am Captain Vance Merriweather.”

Could this day get any stranger? How on Earth did the “captain” know who they were? Clues pointed again to an elaborate reality TV show. Or Rex was at the farm or hadn’t left home, and this was a Dr.-Pepper-and-supreme-pizza-with-jalapeños-induced dream.

Rex quit wrestling with the mental muddle. Be it hallucination or actuality, his brain and muscles ached from permanent freak-out. Plus, if these events were occurring in the real world, his mom would take care of things.

The result liberated him. Rex kicked back, excited to face whatever came next, even if it turned out to be horrible monsters, tap-dancing buccaneers, or complete humiliation in front of a laughing audience. Just don’t call him Bert.

A girl donning a cowboy hat, boots, and a T-shirt portraying a horse with a windswept mane appeared then blended into the background. None of the adults noticed her.

Captain Vance Merriweather carried on with his salutation.

“Welcome to Skyclyffe! I give you a great, hearty greeting. I’m looking forward to getting to know each of you—but, by living thunder, where are my manners? Let me make introductions.” He patted a shoulder of the barrel-chested man on his right. “This is our sheriff, Cleve Bowman, and Noble Berry, our chief Telerayist, is next to him. On my other side,” he turned and bowed to the two ladies, “I have Philomena Ferguson, head of navigation, and Hazel Kiely, our principal doctor.”

Hazel was the vaporizer-wielding incarnate of Rex’s old teacher

“Well, there’s plenty to do and a young lady waiting to have dinner with me, so it’s no time to lollygag. Daniel, if you please, remove the penknife from your pocket and entrust it to Cleve.” He waited while the transaction took place. “Thank you. Our scans found no other security issues, so everything else is shipshape. My crew will get you settled. It’s fantastic to meet you at last.”

The captain gave a wink, a curt bow, and left with a showy swing of feathered hat and swarthy coat.

About the author:
Z. Moss lives in Stillwater, Minnesota and is currently working on the sequel to Skyclyffe. Two dogs, three cats, and two turtles run the household, including the real-life Radar.

Thank you for hosting Skyclyffe on your blog!

Thank you for the opportunity to win!

My grandson would enjoy this book

You are welcome, Sandy! Good luck!

That is awesome, Bill!

I hope he gets a chance to read it.

Is that a UFO?

I like the cover. It has awesome colors and graphics.

That is a good question, Brat!

It is in the it is an unidentified flying object. You’ll will have to read the story to learn more.

The designer did a lovely job. The cloud photo was taken by me, and the ship is based on my son’s drawing.

I hope you read it and leave a review so I can hear what you think of Skyclyffe.

I like seeing the ship emerging from the clouds. Pretty and interesting at the same time.

Thanks for sharing the excerpt. Soundslike an interesting story.

I’m glad you think so, Magic!

I hope you get a chance to read it.

Next time you see a puffy, little cloud, wonder if there could be an airship hiding in there.

I’d love to hear what you think of the rest of the book.

I hope you get a chance to read it.

I’m glad you think so, Susan!

Thank you, Tetewa! I hope you get an opportunity to read it.

I’d love to hear what you think about Skyclyffe if you get a chance to read it.

The book sounds really good. Thanks for the giveaway!

You are welcome, Debbie! I hope you read the book and leave a review so I can read what you think of it.

I really like it, too, Claire! The designer did a nice job.

Thanks, Sand! I hope you give the book a try.

The cover is very captivating. It makes you wonder what's inside.

That is fantastic to hear, Kim—just what we were going for! I’d love if you decide to see what’s inside the book.