something sinister is going on... The Deep by Alma Katsu

Plagued by the demons of her doomed first and near fatal journey across the Atlantic, Annie comes across an unconscious soldier she recognises while doing her rounds. It is the young man Mark. And she is convinced that he did not - could not - have survived the sinking of the Titanic . . . 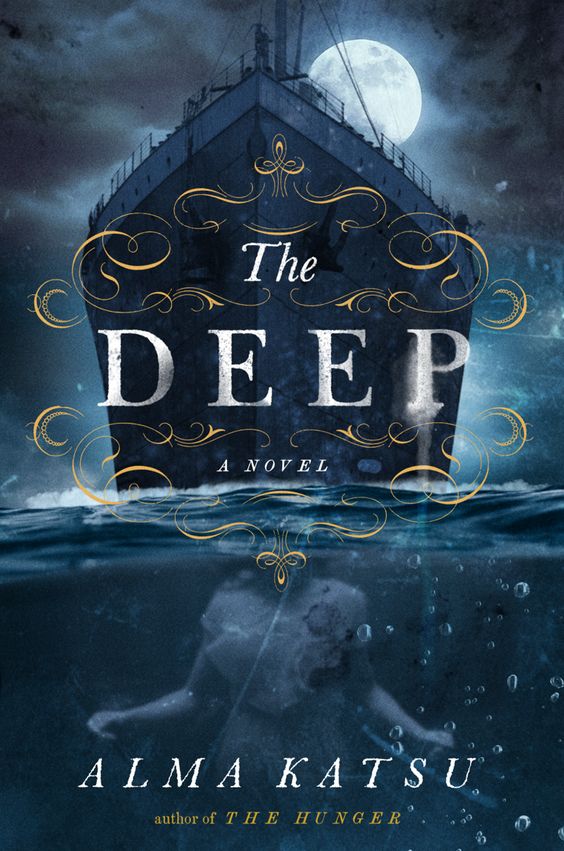 Someone, or something, is haunting the Titanic.

This is the only way to explain the series of misfortunes that have plagued the passengers of the ship from the moment they set sail: mysterious disappearances, sudden deaths. Now suspended in an eerie, unsettling twilight zone during the four days of the liner's illustrious maiden voyage, a number of the passengers - including millionaires Madeleine Astor and Benjamin Guggenheim, the maid Annie Hebbley and Mark Fletcher - are convinced that something sinister is going on... And then, as the world knows, disaster strikes.

Years later and the world is at war. And a survivor of that fateful night, Annie, is working as a nurse on the sixth voyage of the Titanic's sister ship, the Britannic, now refitted as a hospital ship. Plagued by the demons of her doomed first and near fatal journey across the Atlantic, Annie comes across an unconscious soldier she recognises while doing her rounds. It is the young man Mark. And she is convinced that he did not - could not - have survived the sinking of the Titanic . . .

Readers tell me that what fascinates them the most about my novels is the blending of historical events with fiction. Often that joining is so seamless that they turn to the non-fiction to see which pieces I made up and which really happened. I consider that the highest compliment!

I find it fascinating to take a moment in history and—with a few tweaks—have it tell us something about the times we’re living through. That’s the first step for me, looking for the ways a historical event, as fascinating as it is in its own right, resonates today.

Let’s take The Deep. You might scratch your head for a connection between the Titanic and current day, but that was the Gilded Age, a time of great wealth discrepancy (and a lead up to the Great Depression), when it seemed like dynastic families with money were ruling America; a time before women had the vote and were trying to have a political voice. I think we can agree that there are actually many parallels between then and what it feels like we’re going through now.

But a novel is more than a recitation of the past: if that’s the author’s objective, he or she might as well write non-fiction. The point of a novel (again, to my way of thinking) is to reveal truths through art. Art can make us feel the truth in a way that real life cannot. That’s what I’ve tried to do: take emotional historical events and borrow from them to tell another story, point to another truth.

When I started writing historical fiction—particularly books like The Deep and The Hunger, which definitely stray from real events—I was a little uneasy. After all, my background is in intelligence analysis. It’s all about the facts. It seemed like I was doing something wrong, almost illegal, taking such liberties with the truth. But I was able to calm down and remind myself that what I was creating was entertainment, not historical record. And, really, nearly all historical fiction takes some liberties with actual history. Novelists are literally putting words into real people’s mouths, words they almost certainly never said (or never said in the context in which they were being imagined.)

It’s up to each author to decide where to draw the line. When does historical fiction veer into an alternate history? If you’re changing an individual’s life significantly, when are you better off creating a fictional character? There’s no rule book; it’s something each writer needs to decide for herself or himself. The one thing you should be scrupulous about, though, is how you represent the book to readers. Don’t label it historical fiction if you’ve got Martians descending on the battle of Gettysburg.

On the subject of characters, about half the major characters in The Deep were fictional. For me, it always goes back to theme: there’s a theme to the story, and the characters have roles to play in telling that story. Sometimes it doesn’t feel right to bend a real person’s life too much in order to convey that story. That was the case in The Deep: Violet Jessop was a real person who had been on both ships. I could’ve made her the main character, but from what I could tell of her diary and stories about her, her nature was quite different from that of Annie Hebbley, the fictional character who ends up being the main character in the book. In didn’t feel right forcing her into Annie Hebbley’s role. It made more sense to create someone out of whole cloth.

But there are certain roles that need to be filled for which certain real people are completely suitable. I needed one or two rich people to behave badly to illustrate class differences of the era. There were certainly plenty of wealthy people on the Titanic! Then, sometimes you have the case where materials on a historic event are pretty thin, such as crew lists on the Britannic, the ill-fated sister ship to the Titanic in The Deep. The author has no choice but to make things up.

Of course, you can’t write historical fiction without doing research. My day job is, basically, being a researcher so I‘m not put off by a big research job. I’ve gotten so many questions since The Hunger that I developed a workshop for writers on the subject. For most people, I think, it’s a matter of being rusty and needing a little refresher on the basics, or a kick in the pants to get out of “research paralysis” and start writing.

About the author:
Alma Katsu is the author of The Hunger, a reimagining of the story of the Donner Party with a horror twist. The Hunger made NPR’s list of the 100 Best Horror Stories, was named one of the best novels of 2018 by the Observer, Barnes & Noble, Powell’s Books (and more), and was nominated for a Stoker and Locus Award for best horror novel.

The Taker, her debut novel, has been compared to the early works of Anne Rice and Diana Gabaldon’s Outlander for combining historical, the supernatural, and fantasy into one story. The Taker was named a Top Ten Debut Novel of 2011 by Booklist, was nominated for a Goodreads Readers Choice award, and has been published in over 10 languages. It is the first in an award-winning trilogy that includes The Reckoning and The Descent.
​
Ms. Katsu lives outside of Washington DC with her husband, musician Bruce Katsu. In addition to her novels, she has been a signature reviewer for Publishers Weekly, and a contributor to the Huffington Post. She is a graduate of the Johns Hopkins Writing Program and Brandeis University, where she studied with novelist John Irving. She also is an alumni of the Squaw Valley Community of Writers.

Prior to publication of her first novel, Ms. Katsu had a long career in intelligence, working for several US agencies and a think tank. She currently is a consultant on emerging technologies. Additional information can be found on Wikipedia and in this interview with Ozy.com.