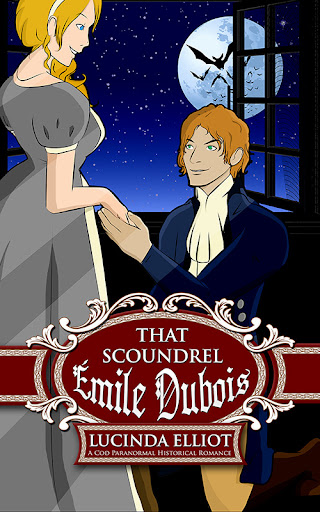 When Sophie de Courcy, the often foolishly romantic and bored but patient companion to the Dowager Countess of Ruthin, marries her long-time hero, the dashing but rascally French émigré Émile Dubois, she has more excitement than she ever wanted as she is catapulted into Gothic adventure with man vampires and time warps.

With the help of her dauntless maid Agnes – who combines Tarot reading with a no-nonsense attitude - and whose own love interest is Émile’s swaggering valet and former accomplice, Georges – Sophie must come to terms with Émile’s criminal past and help free him from the machinations of their evil neighbours the Kenrick’s.

Set during the French Revolution in North Wales and in war torn France, this story is full of lively humour and combines believable characters and over-the-top Gothic adventure as a pair of down to earth eighteenth century villains become incongruously caught up in occult happenings. This darkly funny, sometimes sad and often romantic tale will captivate readers who enjoy a well written spoof of the Gothic tradition.


Émile Gilles Gaston Dubois, born in Avignon in Southern France in 1770, is the first of four children born to th4e ill matched Armand and Anne Dubois. When the revolution breaks out in 1789 the family chateau is razed, his two youngest siblings accidentally killed and he has to live undercover as he and his valet and later partner in crime, Georges, smuggle his surviving sister Charlotte out of the country. After that, he stays in France trying to rescue his parents, who having conspired against the new state, are imprisoned and awaiting execution.

Meanwhile, he is the robber Gilles Long Legs who along with a couple of fellow rogues, runs an eighteenth century equivalent of a protection racket, while ‘Southern Georges’ runs a rival one.

In this guise he meets and falls in love with a respectable English girl, Sophie de Courcy, who has been robbed and cannot explain how she comes to be in Paris; she suddenly vanishes as strangely as she appeared (she has arrived there through a time warp).

After his parents execution, he and Georges leave the country for the UK, where Émile finds more disaster; his sister Charlotte succumbs to a decline.

Émile, now completely reckless of his life and finding his finances temporarily tied up, decides along with Georges – who is always game for adventure - to take up a career as a ‘Gentleman of the Road’ until in danger of capture, they take a brief break at his cousin Lord Ynyr’s mansion on the Famau Mountain in North Wales.

Here he is astounded to find the girl he met in Paris, Sophie de Courcy, working as his aunt’s companion. She has no memory of their meeting and is astounded at his passionate advances. He is enraged, and assuming that she has something to hide, accuses her of having been In Paris on a ‘disreputable adventure’ and offers her money to become his mistress. She is outraged in turn…

Meanwhile, Émile meets too a nearby neighbor, his old associate Goronwy Kenrick, who at the outbreak of the war with France returned from extensive travels in Eastern Europe - including Transylvania, of course - during which he lost his beloved wife. Kenrick has now become obsessed by the idea that time travel is possible through refining the use of thought forms by the addition of mathematics, and is eager to recruit Émile into his researches. Both Émile and Lord Ynyr laugh at him, and then Émile further affronts him by taking from his household the waif Katarina, who has been ill treated there.

Unable to get over his passion for the virtuous Sophie, Émile tries to distract himself by pursuing Kenrick’s lovely wife Ceridwen, despite Katarina’s warnings that both of the Kenricks are half vampires…

Sophie de Courcy, born in Chester 1773, comes from a déclassé branch of the same family as Émile and Lord Ynyr. Her brother having remarried has packed her off to be companion to their grand relatives in their manor on the Famau Mountain in North Wales, finding her upkeep a burden. He regularly writes advising her to try and make a good match through the Count and old Countesses’ influence.

Lord Ynyr and his mother treat Sophie very kindly, but having a romantic streak, she longs for adventure; meanwhile she tries to attract the good natured Lord Ynyr.

When the dashing, witty and wicked Émile Dubois comes to stay with the Count and Countess, Sophie is soon won over, and wishes that she hadn’t been too stunned to accept the passionate proposal he made her on the first night of his stay; still, she has no memory of meeting him as Gilles Long Legs in Paris, as he insists, and knows that she has never been to Paris at all. But whether or not her rascally admirer is deluded, she falls for him anyway.

Meanwhile, Sophie’s Tarot reading maid Agnes is finding it hard to resist her own admirer in Georges, while her cards predict black magic and danger to them all. Sophie has always been scared of the Kenricks ; she dreads their influence on Émile.

About the author:
Lucinda Elliot loves writing Gothic, which isn’t surprising, when she spent her childhood living in isolated, rambling old houses ideal for the settings of Gothic stories – her parents worked at renovating old houses before it became fashionable.

She lived and worked in London for many years and now lives in Mid Wales UK with her family where she strives to improve her Welsh. She loves a laugh above everything, was once a Sportsfighter, and is an environmental geek.

Thank you so much for being part of the tour - Tonya

I looove the cover <3

Thanks so much, Mystic and Chucky!
This is Lucinda, having a lot of trouble with my wordpress log in...