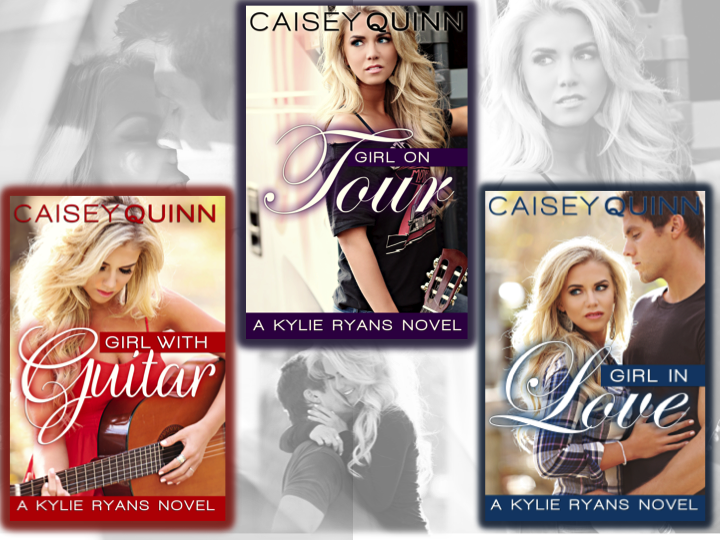 A girl with a dream and a guitar...
A troubled artist struggling to hold onto his career...
What they found was each other.
Girl with Guitar

(old cover)
After Kylie’s dad dies in a freak accident, he leaves her with nothing other than her crazy step-mother, Darla, and the ability to play guitar. When Darla kicks Kylie out and she loses her job all in the same day, she hops a bus to Nashville determined to make her late father’s dreams come true. Waitressing and saving her pennies to record a demo, her big break comes when she’s asked to join a tour going down the tubes with once platinum album-selling country music superstar Trace Corbin. But touring with Trace is hardly a dream come true since he’s pretty much drinking his career down the drain. If Kylie can’t pull Trace out of his rut, he’ll pull her and her dreams down with him.

(old cover)
An up and comer trying to make a name for herself...

KYLIE never expected to be stuck on a tour bus with a pampered princess and her boyfriend’s ex.

A troubled artist struggling to hold onto his career...

TRACE thought he was finally getting to do things his way. Until the label added co-headliner Gretchen Gibson, the only person in country music with more issues than him, to his No Apologies tour.

Surrounded by tabloid rumors and people they can't trust, Kylie and Trace need each other more than ever. But the choices they make will change everything.

Kylie Ryans is the biggest thing to come out of Nashville since, well, since Trace Corbin. With a hit album and a powerful label behind her, she appears to be the girl who has it all.

But appearances can be deceiving.

Fresh out of rehab, Trace Corbin is ready to take on the world. Just not the girl he walked away from. Because if there's one thing he knows for certain, it's that the people you love are the ones who have the power to destroy you.

As their worlds collide, they'll have to make the ultimate choice. Follow their dreams, or give it all up for love.

They say love conquers all, but for Kylie and Trace, it just might wreck everything they've worked for.

Want to join the Kylie Ryans Read Along Happening RIGHT NOW on Facebook?

Caisey Quinn lives in Birmingham, Alabama with her husband, daughter, and other assorted animals. She is the bestselling author of the Kylie Ryans series as well as several New and Young Adult Romance novels featuring country girls finding love in unexpected places. You can find her online at www.caiseyquinnwrites.com.

a Rafflecopter giveaway
Posted by CCAM at 10:30 AM