Interview, Excerpts and Giveaway Palace of the Twelve Pillars by Christina Weigand

The Peace Summit was in shambles, the prince kidnapped.

When the rival king realizes he kidnapped the wrong prince, hostilities escalate. Loyalties to each other and country are tested for the twin princes of Crato, Joachim and Brandan.

Joachim, captive of King Waldrom, faces deception and betrayal as he struggles to find his way home. Brandan, at home with a father focused on rescuing Joachim, wrestles with his own demons as he searches for his place in the world and the favor of his father.

Torn from the safety and peace of their childhood, they are thrust into a world where bonds of family, brotherhood and roles as heirs to Crato are tested. Through war, spiritual journeys, death and marriage, will they choose the path of good or evil? Who can be trusted, as the world they know slips into a whirlpool of chaos?

Brandan and Joachim have returned from the brink of Hell, but everyone questions if they are truly healed and one with Asha.

As each prince tries to readjust to life, they must face the funeral of their father and their missing mother.

They each take on the responsibility of ruling a country with new wives by their sides, but can they and the countries survive the trials that will ensue because of their choices?

Joachim banishes Brandan to prison island of Hyogo. His infant son, Prince Airyn disappears from his cradle. A chain of events is set in motion that will pit brother against brother, friend against friend, parents against children as Brandan and Joachim struggle for control of their sanity and their very lives.

With Brandan declared dead and his son missing Joachim sinks into despair and anger, where those close to him fear he may never return.
Is Brandan really dead and if he is, who is manipulating the Mantion and enemies of Crato?

Can Maeve save her country and her husband from the tentacles of evil pervading the land?

What more exactly is the Christian Fiction genre and is it compatible with the fantasy genre?
You are the tough question lady. I’m not sure how to answer this question. My writing is a gift from God and used to spread His word. I just used a little different vehicle than some, but that doesn’t make it any less compatible. Especially if it accomplishes what God intended. And that is to share His word with young people.

How did you keep the balance between the literature universality and Christian messages?
I really didn’t think about it while writing the story. The story came from a place deep inside me so the Christian message just became another part of the story. I wrote what I believe and I never set out to write a story that was explicitly Christian. My faith is so much a part of me that it couldn’t help but come out in my stories.

What the twelve pillars, three crosses and nine dragons represent?
Twelve pillars represent the twelve apostles of Asha or if you want to take it further the twelve apostles, the twelve tribes of Israel, Basically the tenants on which my faith and the faith of my characters is based. Three crosses; I struggled with the obvious reference because there are not three crosses or three deaths in the story, but the crosses became representative of the trials that the main characters face in the book. Nine dragons are just the nine representatives of Asha of which we really only see six as the other three have gone on to be with Asha. The specific numbers just started out as multiples of three.

What it takes to create a believable alternative world?
That is a hard one to answer. My world was created as the story evolved. It’s part of the way I write, in that I don’t have an outline just a vague idea of what is going to happen. My world is created the same way. So as the world and the story evolved so to would the rules for the world. Even into the edit stage I was adjusting and molding the world to fit and explain the story.

Why do you write young adult books?
Young adults are our future. In my opinion there seemed to be a lack of books out there for young adults that showed young people making choices from a Christian perspective. I wanted them to see that there were other choices to make and that there were consequences for the decisions, be they bad or good.

Palace of the Twelve Pillars

Then his gaze fell on Waldrom. Here was the man, so smug and condescending, who sought to destroy Crato and threatened his parents. He didn’t seem the least bit imposing reclining upon his throne. Disgust overwhelmed the prince, and it was all he could do not to spit on the floor. The man was the antithesis of his father, who, with his broad shoulders and compassionate demeanor, commanded the respect of all who knew him.
The king rose from the throne and waved for the guard to bring Joachim forward.
“Prince Brandan, I presume. I’m King Waldrom.”
“Prince Brandan? No, I’m Joachim.” Waldrom stepped back, and Joachim saw the fire burning in his eyes.
“What do you mean, you’re not Prince Brandan?” Waldrom looked at the guard holding Joachim and waved his hand. A candelabrum flew from the wall, hitting the guard and igniting his beard. The guard swatted wildly at the flames while Waldrom advanced on Melvane, standing by the door. “How could you grab the wrong prince?”
The wizard dropped to his knees. “My Lord, our spies told us Prince Brandan would be in the training room.

Palace of the Three Crosses

Rupert looked through the window in his tower room at the landscape of Wyrzburg. Months had passed since the Battle of Harable Valley and the spring planting season faded into the wonderful summer growing season. The land progressed in its healing and would soon be returned to its former state. As he turned from the window, he thought about the things that hadn’t healed…the twins. Brandan and Joachim still had a long way to go to erase the darkness that infected them. Joachim seemed better, but at night he still dreamed of Sidramah, and the doubts about what happened still haunted him. Brandan appeared even further from the boy that left to find his brother. The darkness appeared to follow him day and night. He withdrew to chambers as far away from Joachim as he could get.

Walking down the stairs to the great hall, Rupert remembered when the princes first returned; both had seemed healed and better than ever, maybe. But it appeared as if the tentacles of Sidramah still lingered. Any small opening the evil one could find, he exploited, and both boys were once again haunted by dark dreams.

“I have sent one who can save them, but he can also bring about their final destruction.
“You, my Guardians, must seek him out. Protect him and ensure he is guided on the right paths.”
Alorn lifted his great ruby-red head. “Tell us who is he, Lord, that we may fulfill Your wishes.”
“I cannot reveal his identity…yet. Just know there are three who need you now. My power will be seen in all, but only one will be the savior in the end. However, all are needed to bring My Will about, and they must all be protected and nurtured.”
“How will we know them?” Stefano leaned forward.
“All will be children of Brandan or Joachim, and they will blend the lineage of the three races.”
“We know of Joachim’s children, but Brandan has none.”
“He has one, a half Mantion-half human child. Gorou is the third, and he will be the hardest to protect and nurture.”
“Why a child of Brandan?” Cielo asked. “Brandan has already chosen the path of evil time and again. Would not a child of his be exposed to that same evil?”
“Although, he fathered the child, Brandan knows not of his existence. 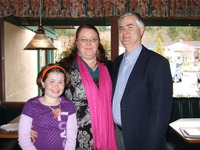 Christina Weigand’s a writer, wife, and mother of three grown children and a middle school daughter. She is also Nana to three granddaughters. She lives with her husband and youngest daughter in Pennsylvania, returning there after a short sabbatical in Washington. Currently, she’s working on fantasy novels and inspirational writing. Through her writing, she strives to share the Word of God and help people young and old to realize the love and mercy He has for everyone.

When she’s not writing, she’s active in her local Church as a lector, Bible Study, or with the church theater group, volunteering at her daughter’s school helping the children develop a love for reading and writing. Jesus fills her home with love as she shares Him through her writing.
Blog ** Goodreads ** Facebook ** Twitter
Author's Giveaway
1 eCopy of all Three Books in the Trilogy (Palace of the Twelve Pillars, Palace of the Three Crosses & Sanctuary of the Nine Dragons).
***Note – Sanctuary of the Nine Dragons will be awarded upon its release.
a Rafflecopter giveaway
Posted by CCAM at 1:10 PM

Thank you so much for the interview and having me on your blog. The questions were challenging and really got me to think about what I write.