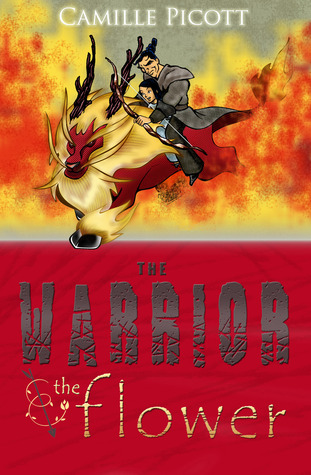 
Did you love the childhood tales? What about the ones from Far East? I cannot believe you didn’t, and I’m sure that the Asian ones have caught you at least due to the mystical and exotic that surrounded them.

Camille Picott succeeds in her novel The Warrior & The Flower to make you dream again as you once did. Do not haste, it is not a story for kindergarten children, but a Young Adult one. But we all like to dream whatever age we are, and sometimes all of us yearn after the lost paradise of childhood.

It is a novel that starts tragic (how many fairy tales have you seen that begin in laughter?) and this coordinate will be the spark and also the engine of the main characters’ actions. A delicate, but strong story, a sad, but full of promises story of two crushed and scattered souls that come together by a happy conjunction of fate. A destiny, that at first glance seemed that in no way can bring together a battle-hardened warrior and a girl with an unhappy childhood, will make the two of them to find a new purpose for living and to rebuild their lives together.

But how nothing comes for free, neither the two of them will be spared from new suffering, and the ordeal which they go through apparently will not end too easily. Their life seems headed for moment by the saying: "One step forward, two steps back". Albeit... the appearances, as usual, deceive. The little girl, who seemed to be a lost soul, cursed to live a promiscuous life, carries with her a secret. The secret of a terrible weapon that is able to turn the course of a war whose end was far from being seen. A child who is not only able to save her adoptive father, both emotionally and, ironically, physically, but also to protect the kingdom from its annihilation. The hope begins to glimpse and all the presciences gain a warm auspicious colour. Can it be true? Because the novel does not have an "and they lived happily ever after." The story does not end and it’s expecting its continuance and denouement. Did I make you curious? Read it, you will like it!

The book is pleasantly written, full of sensitivity and power. It is a novel that is full of action with a lot of well-described fight scenes, with plenty of unexpected twists, with moments of tenderness and sometimes sprinkled with a bit of humour. The style and the set are the ones of a Chinese fairytale and definitely will carry you in a plenteous fantasy world of mystery.

Camille Picott is a fifth-generation Chinese American. She writes science fiction and fantasy books with Asian characters and/or Asian settings. Camille grew up reading speculative fiction stories largely devoid of Asian characters and culture. This, coupled with a passion for her heritage, is the reason she strives to bring some aspect of Eastern myth, legend, culture, and ethnicity to all of her writings. To visit Camille, go to:

LOVE the cover art on this one! Very cool! I am definitely interested in the storyline itself, as well. Thanks for the awesome giveaway!!!

So glad you enjoyed this one too! Thanks so much for hosting a tour stop and sharing your thoughts. Beautiful review!

Great review and this definitely does have a great cover.

This is a perfect book to read for Chinese New Year. Thanks for the giveaway.

I want to read this book. Nice cover!

Thank you so much for your review!

Love the cover. Looks like a lion/dragon hybrid with antlers!

thank you for the great giveaway!