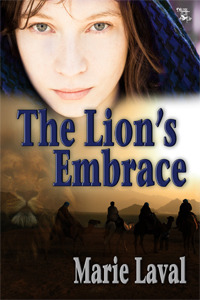 Algiers, 1845. Arrogant, selfish and dangerous, Lucas Saintclair is everything Harriet Montague dislikes in a man. He is also the best guide in the whole of the Barbary States, the only man who can rescue her archaeologist father from the gang of Tuareg fighters that has kidnapped him. As Harriet embarks on a perilous journey across Algeria with Saintclair and Archibald Drake, her father’s most trusted friend, she discovers a bewitching but brutal land where nothing is what it seems. Who are these men intent on stealing her father’s ransom? What was her father hoping to find in Tuareg queen Tin Hinan’s tomb? Is Lucas Saintclair really as callous as he claims—or is he a man haunted by a past he cannot forgive? Dangerous passions engulf Harriet’s heart in the heat of the Sahara. Secrets of lost treasures, rebel fighters, and a sinister criminal brotherhood threaten her life and the life of the man she loves.

Does forever lie in the lion’s embrace?

MB's INTERVIEW
Thank you, Mrs. Marie Laval
How important is to set the correct coordinates for a Historical Fiction book?
I am lucky, I absolutely love researching places or periods of history. I do think it's essential to be accurate not only with the geographical setting or the historical and political events, but also the clothing, customs and attitudes of the period. The way people spoke and their way of thinking varied imensely over different periods of history. There is nothing more jarring for the reader than to be confronted with a typical twenty-first century turn of phrase or attitude in a Regency novel, for example. It doesn't mean however that you have to go overboard with historical detail. Too much 'realism' in the way the characters speak for example, or references to the historical or political context can be tiresome and lose the reader too! It is really a difficult balance to achieve.

What is the charm of a Historical Romance?
For me, historical romance it is the ultimate escapism. I always loved reading historical romances, even as a teenager. My favourite author then was a early nineteenth century French romance author called Delly and I devoured all of his books (I have since discovered that Delly was the 'nom de plume' of a brother-sister team). I think I had the typical little girl dream of being a princess and finding a noble, brave and handsome prince.

Are there advantages choosing an exotic setting?
I don't think the setting has to be exotic to appeal to the reader. The most important is that it appeals to you as a writer and that you really enjoy writing about it. It isn't necessary to have visited the place either, although actual knowledge of the setting is preferable. These days you can do lots research online and discover gems of information, details and pictures about a place without actually going there.

I have never been to North Africa but my mother was born and brought up in Algeria, and I was always fascinated by the stories of her childhood and her black and white photographs. That's why I chose to set The Lion's Embrace there.

How do you prefer your heroines to be?
I like to create different kind of heroines. Some are shy and insecure, some are chatty and bubbly, and others quietly determined, like Harriet Montague, the heroin of The Lion's Embrace. I like them all and don't have a favourite type at all. I don't think however that I'll ever be comfortable with a more aggressive and over confident heroin, but that might change!

Action, romance, danger: how do you create the perfect mix?
I really don't have the answer to that question. I write, and then it happens - or not!

I was born in France and grew up in the beautiful city of Lyon. I moved to England several years ago, and now live in the lovely Rossendale Valley in Lancashire where I am still trying to get used to the damp and cold weather. Writing was always my passion. I particularly enjoy writing historical fiction and romance. 'Angel Heart' is my first published novel. My second historical romance 'The Lion's Embrace' was released as an ebook in February 2013 by MuseitUp Publishing.

Thank you so much for hosting me today!