Vito has grown up in the underworld of the mob. He has recently reached age eighteen. His family has been involved since the thirties. In 2014, the rules haven’t changed much. What worked then, works now; power, violence, and loyalty.

Love isn’t something you can control. As much as Vito, mobster enforcer, wish he could, he can’t. And falling in love with someone who is close to jailbait age is even tougher. Vito bides his time and waits. For a hasty guy with limited self-control, it’s difficult to curb his impulses.

At age fifteen, Erin just wants to forget. Erin’s world came crashing down when she learned her family was not what they seemed. She’s been living in a lie. No one told her her family was mob. The cliché ignorance is bliss becomes a sharp stabbing realization when she has to learn to cope with the aftermath.

Being smart doesn’t save you from terror and doesn’t teach you how to live with it. You can’t escape the mob. It’s part of your existence!

“Sometimes I hear him whispering in my ear as if my conscience has grown and matured into a six foot three dark haired male. The studying, reading, and listening I did to impress adults are nothing compared to what I learned from Vito.” ~ Erin

I jump people in alleys for fun.

I say shit I don’t mean.

Yeah, I’m an asshole…always been one, always will be.

The way I grew up, nice got you fuckin’ nothin’ but stepped on. The mob life is brutal; a hazy, volatile run of survival. I don’t like it, but I’m proud of my heritage and my friends.

One thing I admire is the loyalty in the Mafia. I come from a long line of mobsters. The Rossi’s have been here in New Jersey since the thirties, tommy guns, and zoot suits.

My Pop has been gone on business for the Palmetto Mob Boss for over a year now. His loyalty is unwavering. Mom and I see him on holidays, and he calls a lot. It’s not the same as having him here.

But Pop being away isn’t what’s wrong with me.

Holy shit! I could go to jail. Well, it wouldn’t be the ﬁrst time - and she’d be worth it. I wouldn’t have even found out she was that young if I hadn’t overheard her sister, Megan, telling my best friend, Antonio.

It’s not so bad if she’s turning ﬁfteen like - tomorrow.

I’m trying, I really am. I just have to keep repeating to myself, she’s a freshman, you’re a senior. She has three more years of high school left; I’m going to college next year. Well, I will if I get my head out of my ass.

Every time I see her, she seems to be having the time of her life. She thrives on laughter and fun. Her happiness is contagious. That’s probably why everyone likes her. Erin is way more outgoing than Megan.

She’s smart like her sister. I bet she’ll get an early acceptance to the college of her choice, too.

What would she want with a stupid ass like me?

That damn red hair! And that slim little body. I know that this has to have something to do with Antonio going out with Red…I mean Megan. Yeah, that’s definitely what it is. The hair. The O’Neill girls are different... Irish, not Italian. Forbidden.

Antonio’s father, the Mob Boss of Palmetto, New Jersey, warned all of us years ago to stay away from Megan. But Antonio Rinaldo Delisi, Sr. never mentioned Megan’s little sister, Erin. He probably ﬁgured she was too young to be of interest to us.

I heard some chooches talking about her after school the other day while I was walking down the hallway near the science wing. Typical guy shit. But I wanted to slam their faces into the lockers. I had it all planned out in my head. I was going to take each of them by the scruff of the neck, one by one, and SMASH. I’m familiar with the sound of ﬂesh hitting metal. Then I would’ve taken them into the fuckin’ bathroom and washed their mouths out with anti-bacterial soap. But I held back…

And that shows that I’ve been paying way too much attention to someone that doesn’t even know I’m alive. I’m a chooch when it comes to getting attention. I just act like the asshole I am.

Like the time I hit on her sister in church. And did I mention that Erin didn’t even look my way? That was just me being stupid. I do stupid shit all the time because I don’t think, I just do. It’s an important motto in the Maﬁa. Thinking can be very bad for your health. No one wants cement shoes and lungs full of water.

She’s got a boyfriend. I’ve seen him. He’s a scrawny little guy. His mother picked Erin up from school one day: I saw the mini-van pull up. The door slid open and she hopped in. Her face said it all; she was happy and excited to see her pansy little boyfriend.

The guy is in the same grade as her, but he goes to another school. Lucky for him…he doesn’t have to see her every day. That is, if that pansy kid could really be as attracted to her as I am. And it’s good because if he were around, I’d consider beating him up every once in a while just for shits and giggles.

Like a chooch, I’m on high alert, constantly looking for her in the hallways. I know every class she’s in. I’ve actually cut a few classes to wait outside her classroom like a stalker.

This cannot be normal. I know its not. Maybe I need a shrink. Some intense therapy might beat it out of me.

That’s it! A good beating! 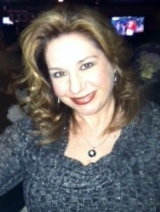 Amy Rachiele is a military spouse and brat who spent many years volunteering and on staff for the Army National Guard and Department of Veteran Affairs with family support, family readiness, as well as, families of the Fallen. Amy devoted 10 years to teaching at-risk students in the Providence School System.


She holds a Master's degree from Rhode Island College in English and Secondary Education. She volunteers her time at the local library facilitating a writer’s group in the hope of inspiring other writers. Besides writing, she enjoys scrapbooking, sewing, and traveling. Amy lives in Massachusetts with her son and husband.

a Rafflecopter giveaway
Posted by CCAM at 11:00 PM