Excerpt and Giveaway Always You by Missy Johnson 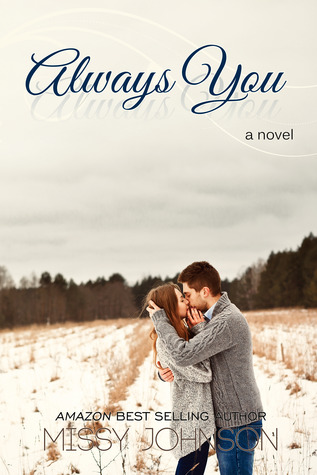 I was thrilled when I was offered a graduate teaching position at the prestigious Tennerson Girls Academy. At twenty-three, this would be my first ‘real’ teaching assignment. Working at the elite boarding school, home to the daughters of some of the wealthiest people in the world, was a great opportunity that I would’ve been stupid to pass up.

One week into my new job, and I suddenly had no idea why I chose high school…I was a seventeen year old boy once, I knew how teenage girls behaved.

You can’t even imagine the hell of trying to teach thirty, hormonal driven seventeen year olds who have been cooped up, away from any male contact.

I could handle the whispers every time I entered the room. I could even handle the obvious attempts at gaining my attention. What I couldn’t handle was her…

Rich bitches and way too many rules. Was it any wonder that I hated school?

Add to that the lack of male contact, and I was going insane. Like literally. I wasn’t used to this. A year ago I was normal. I had a boyfriend, friends and a loving family. There is nothing normal about me anymore, and nobody here lets me forget that.

My name is Wrenn, and I’m only here because my aunt took me in after what happened, but my aunt also happens to be the headmistress of this academy…Can you see my problem?

Then he arrived. Dalton Reed. My new history teacher.

Slowly, he helped me see that even in the worst situations, there is always hope.


“It’s just my mom and I. Dad died when I was fifteen. I’ve always wanted to be a teacher, though originally I wanted to go with elementary.”
“Why did you go with high school?” I asked curiously.
He shrugged. “Last minute decision,” he said with a smile.
I laughed. “Oh, I bet you’re regretting that now,” I teased.
“I have no idea what you mean.” He looked at me innocently, and then his face broke into a smile. “Okay, teaching teenage girls is pure hell.”

I giggled. “Come on, it can’t be that bad. A couple of hundred girls, all thinking you’re a god? That’s got to boost the ego.”
“A couple of hundred girls all under the age of eighteen,” he corrected dryly.
“I’m not,” I said lightly, surprised by what was coming out of my mouth.
“Yeah, well you’re the exception,” he said.
The exception. I liked being the exception. I met his gaze, his eyes burning into mine. My face began to heat. How could I not read into things when he was staring at me like that? I felt naked under his gaze.
****
I laughed. “Trust me, they do. I’m the niece of the headmistress and I don’t come from a family of big money. Add to that all the ‘special’ attention I used to get from teachers who were just trying to look out for me, and what’s to not like?” I joked. I shrugged. “Not that I care. With the exception of Kass, I’d prefer not to know any of my peers. I focus on my schoolwork and grades. That’s it. Two more months and I’m free. Less than two months. Six weeks. Thank God for extra credit and early graduation.”
He was silent for a moment. “Anyone who chooses not to get to know you is missing out. Not you. You’re unlike anyone I’ve met.” He looked up and met my gaze; those incredible blue eyes were staring right into my soul. It gave me goose bumps. This guy made me feel like I wanted to live. Really live, not just go through the motions of day to day life.

About the author:
Missy lives in a small town in Central Victoria with her husband, and her confused pets (a dog who think she's a cat, a cat who thinks he's a dog...you get the picture).

When she's not writing, she can usually be found looking for something to read.