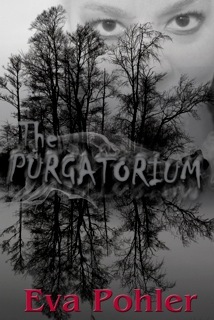 Seventeen year-old Daphne Janus is floored when her parents agree to let her accompany her best friend to a getaway resort on an island off the coast of California. She doesn't know her parents have sent her to the Purgatorium as a last-ditch effort to save their child.

Her best friend and life-long neighbor takes her to a mostly uninhabited island with a wildlife preserve on one side and Chumash Indian ruins on the “haunted” side. The resort might be beautiful, the beach pristine, and the views from the headland amazing, but strange things begin to happen that soon have Daphne running for her life. At first she finds the therapeutic games thrilling: the ghosts that visit her room, the dropping elevator, and the kayak incident are actually kind of fun once she recovers from them. But when her horse bucks her off during a trail ride and she becomes lost on the haunted side of the island, it’s not fun anymore, and she wonders if her parents have sent her there to help her or to punish her.

A figure stepped into her view through the binoculars, but it was no fox. She watched it, focused the lenses. It was a person. A hiker? A girl with long black hair trailing behind her ran along the stream, turning back to look, as though she were being followed.

Just then a man grabbed the girl by the hair and dragged her back up the hill and into a copse of trees.

Daphne’s tongue twisted in her mouth as she stammered, “A man….and a girl! He’s hurting her!”

The doctor took the binoculars and pointed them toward the valley. “Where? I don’t see anything?”

“Roger, take us down into the valley, please,” Dr. Gray said.

The driver sped downhill. The road ended about twenty yards from the spring. Roger stopped the jeep, and all four climbed out.

Daphne pointed to the ground, insistently. “They were here, I swear I saw them. He was pulling her by the hair.”

When the adults looked back at her blankly, she took off running through the nearby trees, her heart beating wildly. Why wasn’t anyone taking her seriously? Panic had overtaken her and she couldn’t think. She couldn’t think. “Hello?” She saw and heard no one.

The others also called out and began to search the trees.

After several minutes, they all met up again.

“What should we do?” Cam asked, out of breath.

The doctor put a hand on Daphne’s shoulder. “Please don’t be offended by what I’m about to say.”

Daphne couldn’t believe the patronizing look on the taller woman’s face. “I didn’t imagine it,” she said, panting.

“It’s been a long, tiring trip, and islands are famous for their mirages, especially this one,” Dr. Gray said.

“What ghosts?” Daphne asked. Even though she didn’t believe in ghosts, goose-bumps popped up along her arms.

“Let’s go on to the resort,” Dr. Gray said. “I’ll phone the naval guards when we get there and tell them what you saw.”

“What ghosts?” Daphne asked again in the jeep in the backseat beside Cam. She twisted back with her eyes held up to the binoculars, scanning the stream and nearby woods for signs of the girl and her attacker as the jeep climbed toward the canyon ridge.

“We aren’t going to talk about nonsense,” the doctor said.

“She has a right to know about the island’s legends,” Roger objected.

“Is this the one about Misink?” Cam asked. “The guy who threw the men in the ocean and took the women on his rainbow bridge?”

Hortense Gray turned from the front passenger seat. “The Chumash believed the first people grew from seeds planted on this island by the Earth Goddess, Hutash. When the island became overpopulated with people, she sent down Misink, the guardian of nature, to set things right. They say each year Misink threw six young men into the ocean where they turned into dolphins. That’s why the Chumash consider the dolphins to be their brothers.

“Misink also took six unmarried women and had them for himself. They say he took them into the sky by way of his rainbow bridge, and they were never seen alive again.”

“What does this have to do with ghosts?” Daphne put down the binoculars, the deep valley now out of view.

Roger said, “People say Misink comes for women about your age to take with him to the skies, and sometimes they come back and wander this here island.”

“Interesting legend, but you don’t expect me to believe that was Misink out there in the valley, do you?” Daphne smelled a set-up. “Is this some kind of joke?” She expected one of them to say, Bwahahahaha, any minute now.

Roger coughed and cleared his voice.

“Like you can talk,” she whispered back. Cam had made plenty of claims throughout their childhood of having seen his grandmother in his attic. Her brother, Joey, a year older than Cam, still believed Cam’s grandmother spoke to him.

Roger said, “I dare you to spend one night at the old Christy Ranch, and then you can laugh at me all you like.”

“It’s on the western end of the island,” Roger said. “That there ranch house is haunted by the wife of a slave trader.”

“Have you seen her ghost?” Cam asked.

“No, but I’ve heard the screaming.”

“Out on Haunted Bridge,” Roger replied. “I’ve heard the screaming with my own ears. My pal and I searched all over in the morning and found no trace of anyone and no explanation for the screams. People say the wife of the slave trader was horrified when she learned what her husband done, and, once when he was headed back for more slaves, she sunk his ship with him and his crew aboard. They say she went crazy until she died. They say she’s responsible for a lot of the ships that wreck in that there part of the sea.”

As they made their descent into the canyon, no one said more about the incident Daphne may or may not have seen. Daphne was tired and had eaten little. Maybe she had imagined the figures in the valley.

Joey, her brother, saw people who weren’t there all the time. Daphne worried one day she would begin to see them, too.

No. She knew what she had seen. They’d been real, flesh and blood, living people. But something gave her the feeling that Dr. Gray and Roger were messing with her.

Eva Pohler writes fiction and teaches writing and literature at The University of Texas at San Antonio, where she lives with her husband, three teens, and two dogs. She is the author of The Gatekeeper's Saga, The Purgatorium Series, and The Mystery Box.

thx u for hosting ^^

This book sounds very interesting and spooky. Thanks for your giveaway!
i_love_books at aol dot com

thanks for the giveaway!! :)

Oooo, this looks like an excellent thriller! I love ghosts and unexplained happenings from years of watching Alfred Hitchcock and Vincent Price, lol

This sounds just like the kind of book that I like! Thanks for sharing!
buffywnabe at gmail dot com

Thanks! This book looks great and I can't wait to read.

This book sounds very interesting for sure and I am very interested in reading this one! Thanks for the giveaway an opportunity to win!

Now that is spooky. I'd wonder if they were joking with me too. Ghost stories scare me but I can't stay away from them!

Sounds great :)
Thanks for a chance!
qwertzuio789@net.hr

Hello there , thanks for the giveaway and here is my addy
roswello at Hotmail dot com

Thanks so much for sharing this giveaway! I love the blog! Happy Reading! :)
stewart_panthers@yahoo.com

HI, new here, thanks for the opportunity to win. loriagalbraith at gmail dot com

Thanks for the Giveaway!!!

congrats on the book release and thanks for hosting!

Thanks for the chance!
botezatu_paula@yahoo.com

Thanks for the awesome giveaway!
My mail is:
morenablack3(at)gmail(dot)com

thanks for the giveaway <3
xyoursohardcorex@aol.com

The book sounds really intense! Thank you for the giveaway!
mail: maryannehart99 at gmail dot com

Thank you for the giveaway ! <3
brownemma012@gmail.com

Thanks for the chance to win
jfitze2@hotmail.com

Sounds like a great book...though I would probably avoid reading it before bedtime! Thanks for the giveaway!
collenga@yahoo.com