Love in the Shadows by Dylan Madrid 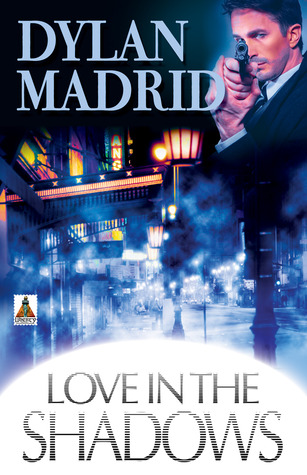 Quintin Pearson, an American living in London, has spent the last two years working as a magazine staff writer and nursing a broken heart. Craving a change in his quiet life, Quintin accepts an invitation to an exclusive party hosted by Regina Bremington, the U.S. ambassador’s glamorous wife. At the party, terror takes over when the electricity suddenly goes out and the ambassador is assassinated.

In the safety of a dark bedroom, Quintin meets a mysterious stranger named Luca, an Italian spy. Even though the two men can’t see each other, a spark is ignited that soon becomes a mutual lust. Within days, Luca arranges for them to meet again at a remote seaside town in Belgium. There, Luca confesses his true identity and convinces Quintin they must team up to bring the ambassador’s killer to justice.

Love in the Shadows was inspired by a dream I had and a song of the same title.

GUEST POST
The Glamorous Life: Writing a Spy Novel
by Dylan Madrid
Nothing could’ve prepared me for this experience. No matter how many spy novels I read, James Bond movie marathons I had, or espionage-related research I conducted, I still felt inadequately prepared and terrified to dip my literary toe into a genre pool I’d never dared to swim in before.

There’s a sacredness to spy thrillers. Ian Fleming certainly owns the share of the market, rightfully so. No other writer has come close to touching his iconic creations, particularly his larger-than-life protagonist.

Looking back, this is a genre that’s always fascinated me. I remember being a sophomore in high school and finding myself mesmerized by the film A View to a Kill, which I discovered because of my love of the theme song by Duran Duran. As a viewer, I ached for the on-the-edge glamour and unpredictable sense of adventure.

Fast forward to today and my first spy thriller, Love in the Shadows, has just been released in paperback and eBook. To say writing this novel was a labor of love is an understatement. Nothing else I’ve written has required the amount of research as this book did. Having no experience in this arena, I was determined to make sure I had my facts correct. Thankfully, one of my wonderful editors, Stacia Seaman, offered a considerable amount of help and provided crucial changes to ensure as much authenticity as possible.

The writing process was like no other. A few chapters in and I was already overwhelmed. I kept thinking, “What have I done? What am I doing? I know nothing about writing a spy novel.”

Lost, I went back to my youth, back to Duran Duran and A View to a Kill. Back to Roger Moore. It was then I discovered a wonderful quote by Salman Rushdie: “The glamour of being forbidden must not be underestimated.”

I returned to my manuscript and was encouraged when I realized the elements of both glamour and the forbidden were already there. I just needed to turn both up a few notches.

Love in the Shadows is unique for many reasons. The novel is the first book in what will become my first trilogy (the second novel in the series, The Beautiful Lie, is currently being written with the third book, The Edge of Desire, close behind it). It is my first novel set exclusively in Europe. It also features some fantastic female characters that have already become personal favorites of mine.

Of the spy genre, actress Helen Mirren has said, “The role of women has always been undervalued in the spy world, always undermined in terms of recognition. Unfairly so. It's a world that needs women.” I couldn’t agree more. I populated Love in the Shadows with strong female characters (three of which are spies) for this very reason.

Glamour. The forbidden. Espionage. All of these ingredients were necessary to create a novel that forced me out of my comfort zone as a writer. The finished result is a novel I define as fun. Certainly a love triangle about a broken-hearted American journalist, an Italian spy, and a secret service agent makes for what I think is an enjoyable read. No, Love in the Shadows won’t change the world, but that’s not my intention. Instead, I hope it brings a little glamour and adventure to the lives of readers who crave it.

About the author:
Dylan Madrid is the author of the novels Mind Fields, Love in the Shadows, and Backstrokes. A California native, Dylan grew up in the Bay Area. He opted to backpack through seven countries before heading to college and spent a year living in Europe, primarily on the Greek island of Ios. When he's not dreaming about living on the Italian Riviera or running away to Belgium, Dylan teaches college courses in writing and the arts.