"I LOVED this version of Atlantis. It's definitely a very high fantasy concept, with its futuristic technology that goes far beyond basic medieval devices. The "hoverboard-like" devices in this story immediately brought to mind Back to the Future, but with a touch of Tony Hawk thrown in. A whole lot of fun!" Andy, Goodreads 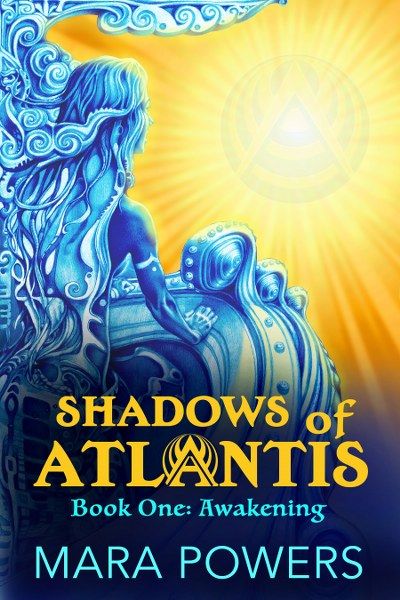 "...had me turning the pages obsessively from the very beginning." Readers Favorite.

Enter the legacy of the legend...
Brigitte has been chosen to renew the treaty between Atlantis and the ancient bloodline of Lemuria. As an emissary of nature, her betrothal would ensure the continued function of the Crystal Grid, the life source of the ten kingdoms of Atlantis. But as Brigitte prepares to leave from her home in the magical Dreamvale, her people are attacked by a storm of shadows. Now she is running for her life.

Upon her arrival in the ruling city of Atlantis, she meets D’Vinid, a dejected musician who lives the quintessential Atlantean lifestyle of revelry, escapism and apathy. Under the eclipse of a sacred festival, they are swept into an attraction they cannot resist. Their union may protect humanity from its worst enemy - the shadows of Atlantis. But there is one problem, this man is not her betrothed.

Brigitte soon discovers that the corruption of the Grid could very well be the Grid itself. Citizens have neglected to attend the rituals required to charge the crystals with their psychic emanations. Some have fallen prey to an epidemic called “the madness”, caused by shadowy parasites that feed off human suffering. But as nature always strives toward balance, the crystals have activated a genetic upgrade among the people. The youth have begun to express supernatural powers. Could it be that D’Vinid and Brigitte are meant to be leaders among the awakened? And if so, why does it seem impossible for them to be together?

A mysterious tale of romance, seduction and betrayal that reaches just enough into the modern mind to ask - will we learn the lessons of Atlantis?

Leaving the Dreamvale would mean Brigitte would gradually forget growing up on the rocky shores of the mystical islands. She stood in her favorite place high above the dreamclan village watching the ocean dance with the cliffs. It would be her last chance to behold the glory of sunset before boarding the galleon bobbing in the cove below.

Evenings were always a masterpiece of color, the best time to behold the splendor of nature’s art. Clouds of rainbow prisms had the look of creatures billowing in the sky. But in the distance, a wall of storm opened like the jaws of a predator, drifting ever closer to the peaceful, green island.

“Brigitte.” A male voice echoed through her contemplation. She felt a pang of disappointment. Leaving would mean the beginning of a journey she had feared all her life. With one last lingering view of the panorama, she held her breath, reached out her arms and leapt from the cliff. As a mass of dancing particles, she bounced down the ragged rocks toward the village, one with the wind. Taking her time would be rude, so she kept moving until she filled the inside of her room.

Her brother Lukias was a dreamseer, finely tuned to the invisible. As usual, his hair was a shock of chaos that pointed in every direction. The amber of his eyes sparkled with gold flecks as he stood over her body with arms crossed. He looked right at her dream form. “The council has called us,” he said with a hint of impatience.

Brigitte sank back into her body and opened her eyes.

“I warned you not to dreamwalk too much.” He turned his back as she reached for her travel clothes. “You could separate from your body and forget how to return. Especially here in the Dreamvale.”

“It hardly matters anymore.” She watched the sun’s rays shoot dusty light through holes in the walls. She thought about the pattern it made every day at this time, the royal symbol of Atlantis. “In Atlantis we will be bound to our bodies.”

Lukias reached out a caring hand and patted her shoulder. “There will be ways to dreamwalk in the realms of matter. It will just be more… challenging.”

She smirked, knowing he always loved a challenge. He could always find humor even in the grimmest of circumstances. They exchanged a few moments of unfolding memories until, with the final boot in place, she stamped her feet and started for the door. “You coming?”

Together they walked to the center of the village where the council was gathered in a semi-circle facing a woman. She wore the leather of seafarers, her face shaded by a wide-brimmed hat. With one hip thrust to the side, her demeanor was unruffled with a twist of amusement.

Their father Denikon raised his booming voice for all to hear. “Captain Ofira Pazit of the Dreamship Vex Voyager, I give you my daughter Brigitte, emissary to Atlantis. She is the first true Moirae born into our dreamclan for seven generations.” 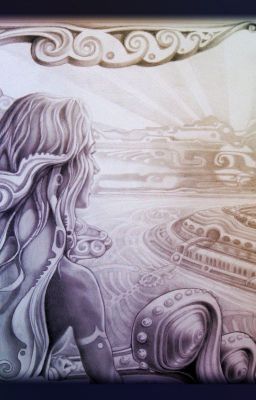 The captain wrinkled her chin. “Impressive. Embodied Watchers are rare, even among dreamclans.” Her chameleon eyes shifted in the fading light. “If you are ready, I think it wise that we set sail before that shadow storm arrives, don’t you?” Her eyes slid toward the horizon. “This storm has struck more than one dreamclan. All of them were to send emissaries for the renewal of the Telluric Treaty. None of them have been heard from.” She turned back to the council. “Are you certain you want to risk staying? It would be a tight fit, but we can evacuate the rest of you.”

Brigitte glanced at the grim face of her tutor Indrius. The mysterious Atlantean woman had always been a curiosity to the clan. Though she had spent many years among them, she was never one of them. She was riddled with tragedy from a past she never spoke of, a past born in Atlantis.

Denikon answered, “Those who remain have chosen to face the shadows.” His voice was steadfast though regret lingered in his eyes. He exchanged a nod with Indrius. “I am sending Lukias, my son and heir, to accompany his sister. If we fall, he will be the future of our clan. But trust me, we will not go down without a fight.”

The council had argued for many moon cycles, trying to decide the fate of their people. It was important for Brigitte to escape. Her path was evident. The first ships had already departed, taking women and children to places of refuge. The rest stayed, devising a strategy. Though they were hopeful, they worked with the solemnity of people who faced their demise.

She squinted at Lukias as he and Indrius said their goodbyes. Theirs was always a close relationship. But everyone liked Lukias. Her time spent with Indrius was always strained at best. She offered him a gift. The sun flashed off a crystal dangling from a silver chain. Brigitte could feel the telluric consciousness radiating from the multi-faceted quartz. It pulsed with a longing that made her fidget.

After a whispered message to Lukias, the white-haired woman turned to look at Brigitte. Her green eyes were gray with emotion. She brushed Brigitte’s cheek with her fingertips. “You know your task,” she began. “Remember your Watcher powers. It has become exceedingly difficult to travel between realms on this planet. I fear this shadow storm will make it even more difficult. Atlantis is suffering from a disease. It will try and take you, too. Do not be attached to your human wishes and emotions. For humans, attachment can turn to weakness and suffering. This only serves to feed the shadows. Your path will not be easy.”

“I will do what it takes to find a cause and a cure for Atlantis. I will be mindful of your warnings.”

“Therein lies the trick. As you descend deeper into the Meridian Realm, you will forget my warnings. Take steps to hold them in your heart.” She lingered in Brigitte’s eyes for a few awkward moments. “I have prepared you as best I could, my child. I regret how I’ve treated you.” She faced Brigitte and held her shoulders. “Know that I loved you like my own daughter. My treatment toward you was an attempt to prepare you for the task you face. Atlantis will not be kind to you.”

“I understand, Indrius. You had no choice.” Brigitte wanted to cry. But her tears had long since dried up.

About the author:
Mara Powers is a rebel of the written word who has tackled the monumental task of recreating Atlantis. When she was 16 in Fort Collins, Colorado, she began visiting the library in search of things she couldn't learn in school. Her goal was to re-define her religion. She studied theology voraciously until she discovered the concept of reincarnation though Hinduism. It was the answer to a lifelong existential crisis that had plagued her for many sleepless nights. The study of reincarnation led her to the channel Edgar Cayce. In his many books, she found his past life readings of lifetimes spent in Atlantis. This was the beginning of a lifelong quest to unravel the secrets of this mystery. She has spent upwards of 30 years exploring the labyrinth of ancient civilizations. Her decision to turn it all into a high concept, visionary fantasy series stems from her study of the esoteric depiction of Atlantis. With the other half of her research rooted in the secular, it was the best way to illustrate both aspects of this fascinating legend. Her work is the legacy of the legend.

a Rafflecopter giveaway
Posted by CCAM at 8:27 PM

I love your beautiful blog! Thank you so much for posting. I hope you get a chance to read it soon. Book two is soon to follow.

This series sounds exciting and such beautiful cover art.

Thank you! Its exciting to write :) feel free to reach out with questions and such. I always love to communicate with people sparked by my work.

I have always been fascinated by the legend of the lost city of Atlantis and I am looking forward to reading your version of the story.

I like the font used in the word Atlantis. Bernie Wallace BWallace1980(at)hotmail(dot)com

I like the design and colors of the book cover. This sounds like a good fantasy adventure.

This book intrigues me. I've always been fascinated by Atlantis stories. The cover is very pretty.

What a creative cover. I just love it.