Unlike Cupid, his arrows kill... Running from Arrows (A Running Store Mystery #2) by T.C. Wescott

"This book had several different components. Of course, the mystery...However, there was romance in the air too. The two balanced each other out perfectly. I also loved that it was a very modern mystery, yet had shades of Agatha Christie, with Ruby taking the lead. This was a great read perfect for Valentine’s Day!" Christie72, Goodreads 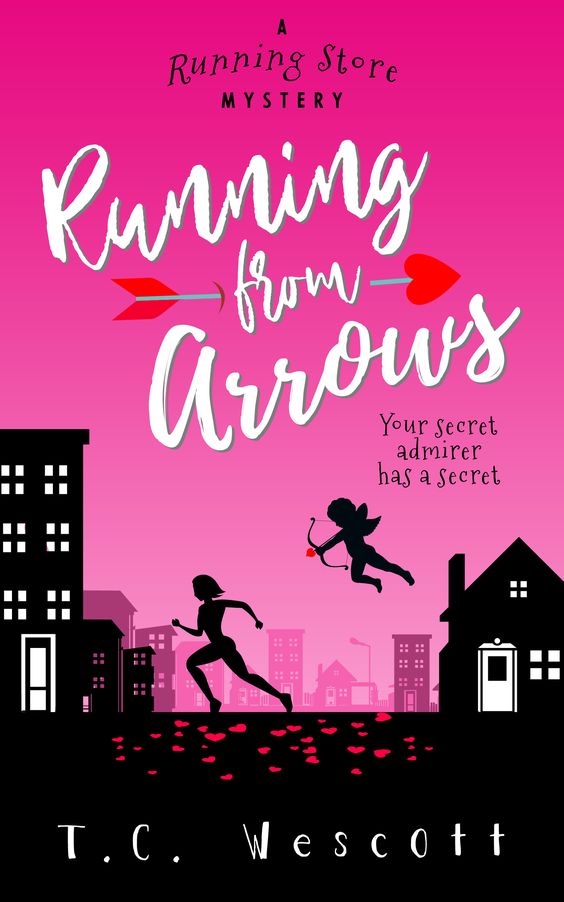 One of Lacy's beaus has a bow. Unlike Cupid, his arrows kill. There's more than romance in the air this Valentine's Day!

Running from Arrows is the fun, twist-filled, romantic cozy mystery romp you've been waiting for!

Valentine's Day is coming up and Lacy is single. If that's not bad enough, she has a secret admirer. Is it the compassionate, haunted detective, the ruggedly handsome businessman, the suave maître de, the guy in her running group who likes to stare, or maybe someone who's not on her radar? She'll find out soon enough because he's invited her to dinner. Now the question isn't how long Lacy will remain single but how long she'll remain alive.

During the Sweetheart Run through the town of Cedar Mill a fellow runner is murdered and a notorious burglar called the Black Cat is found dead with an arrow sticking out of him. Somehow these strange murders are connected to the ladies of Run For It - Lacy the divorcee, Stax the quirky bookseller, and Ruby the old-time mystery novelist. They're back in a race against time to catch an invisible killer and exonerate an innocent man!

If you love a delicious mystery dripping with romance, humor, and chills - and a Valentine's Day dinner no reader will ever forget - then buy Running from Arrows now and run it right to the top of your TBR pile!

You'll want to tell all your friends about Running from Arrows, but whatever you do, DON'T TELL THE SECRET OF THE SECRET ADMIRER.

Running from Arrows is part two in a series but can be read as a stand-alone.

Lacy Purdy loves her new town, her new job, and her old cat, Meatball. And she loves to run.

This summer, she’ll be running for her life.

A phantom lurks in the shadows of Run For It, the local running store, terrorizing an unpopular run group leader with an arsenal of sharp, shiny scissors. Lacy can’t stand mean-girl Marlene and everybody knows it, so when she mysteriously disappears in the middle of a run, Lacy suspects foul play.
Everyone else suspects Lacy.

About the author:
T.C. Wescott was born in Missouri but has lived in Oklahoma most of his life. Like pretty much every author who has ever breathed, he is an avid reader. His favorites are classic mysteries from the Golden Age, as well as just before or just after that period (which is widely considered the period between the two World Wars). His first mystery novel, Running from Scissors, was published in July 2018 and will be the first of at least three books in the Running Store Mystery series.

The Christmas Village Mystery series was launched in November with the debut title Slay Bells. The formula for his books is simple – mixing the classic, traditional detective fiction standards with all the trappings of the modern cozy mystery.

Wescott is also (under another name) the author of two award-winning non-fiction books as well as a slew of essays and articles.

This sounds like so much fun to read. Love everything about it. Thanks for sharing.

Thanks for the support! T.C. Wescott