like a persistent stray... The Puppy Who Knew Too Much (Dog Club Mystery #2) by V.M. Burns

"When little Aggie sniffs out a dead body, the author really begins to spin the wheel and readers should watch closely as she drops off clue after clue as to answers for this niftily crafted plot! With a winning cast of secondary characters including all the dogs, plus an unexpected yet possible romantic interest for Lilly, this is a fun, fast read! I highly recommend!"- Linda, Goodreads 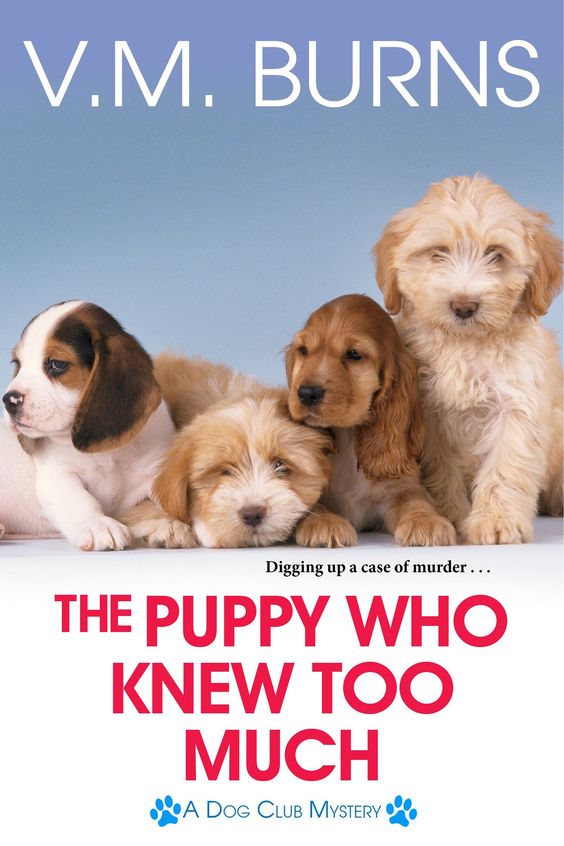 Lilly Echosby and her toy poodle Aggie find a fresh start in Chattanooga, Tennessee, spoiled by the scent of murder . . .

Having solved the shooting death of her cheating husband, Lilly's left behind the drama of Lighthouse Dunes, Indiana, to start over in the hometown of her best friend, Scarlett "Dixie" Jefferson. As she gets settled in her new rented house, Lilly gives Aggie, short for Agatha Christie, her own fresh start by enrolling her in the Eastern Tennessee Dog Club, where Dixie is a trainer.

But drama seems to hound Lilly like a persistent stray. Her cranky new neighbor appears unfamiliar with Southern hospitality and complains that Aggie barks too much and digs up his prized tulips. But what the poodle actually unearths is the buried body of a mysterious man who claimed ownership of the lost golden retriever Lilly recently rescued. Now it's up to Lilly and Dixie to try to muzzle another murderer . . .

In Romeo and Juliette, Shakespeare wrote “A rose by any other name would smell as sweet.” This may be true, but names are important, especially in literature. The mental image created when you read about a character named, Bambi is very different from the image that pops up when you read about a “Harriet.” Not that there’s anything wrong with either name (I’m not judging), but names create visual images and help to set reader expectations. This holds true when naming human characters as well as non-humans.

I love dogs (especially poodles) and incorporate them into all of my books whenever possible. In my Dog Club Mystery Series, there are quite a few dogs and choosing names for these talented creatures can be challenging. In the Dog Show world, there are a lot of titles that dogs can earn by competing in various events. Dogs can earn titles in everything from conformation to tracking and everything in between. Dog names selected for show dogs have a number of components including the name of the kennel where the dog was bred. Let’s take a look and dissect one of these.

In the Dog Club Mystery Series, Lilly’s friend, Dixie, has two champion show dogs. One of the dogs is, Ch Chyna 9th Wonder of the World and the other is GCh Galactic Imperial Resistance Leader. Both of those are mouthfuls and would pose a challenge to any owner calling their dog inside. That’s why dog owners also include a “call name” which is basically what the owners call their dogs on a daily basis. In the case of my fictional poodles, that’s “Chyna” and “Leia.”

So, what’s in a name? When it comes to show dogs, owners pack a lot of information into those names. However, there’s one more element that a good show dog name should include. A show dog’s name needs to sound good. When the host for the Westminster Kennel Club Dog Show calls a dog’s name over the loud speakers at Madison Square Garden, it should have impact worthy of the venue and the occasion. After all, this name may be entered into the kennel club’s record book and remembered for many years to come.

About the author:
V.M. Burns was born in Northwestern Indiana and spent many years in Southwestern Michigan on the Lake Michigan shoreline. She is a lover of dogs, British historic cozies, and scones with clotted cream. After many years in the Midwest, she went in search of milder winters and currently lives in Eastern Tennessee with her poodles. Her debut novel, The Plot is Murder was nominated for a 2017 Agatha Award for Best First Novel. Valerie is a member of Mystery Writers of America, International Thriller Writers, and a lifetime member of Sisters in Crime. Readers can learn more by visiting her website.

a Rafflecopter giveaway
Posted by CCAM at 3:05 PM

Thanks for sharing such a cute book.
sherry @ fundinmental

Thank you for being part of the book tour for "The Puppy Who Knew Too Much"by V.M. Burns. I found the guest post about dog name's very interesting. I can't wait for the opportunity to read this wonderful sounding book.
2clowns at arkansas dot net