keeping things strictly business... Crazy on You (A Love & Harmony Romance #3) by Crystal B. Bright

Melding their sounds and personalities will be difficult—though not as tough as keeping things strictly business. Getting involved with his partner could prove career-wrecking, yet discovering the real Tassia could be earth-shattering. 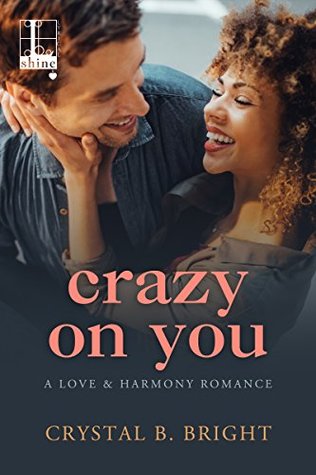 Worse than a one-hit wonder, Tassia Hogan is a one-line wonder. Infamous for a memorable, extremely provocative verse, her music career is going nowhere. Finding a decent man to date has also proven fruitless . . . they all think she’s as wanton as those lyrics. But now her label is offering Tassia the chance to shine—with a catch. The album is duets. Her partner is a Country Western singer. And he’s just as reluctant to agree as she is.

Hyde Love has been in the music business since he was eleven, and he’s becoming more and more disenchanted with it. Collaborating on an album seems great in theory, but Tassia is an R&B singer.

Melding their sounds and personalities will be difficult—though not as tough as keeping things strictly business.
Getting involved with his partner could prove career-wrecking, yet discovering the real Tassia could be earth-shattering.

Tassia Hogan sat in a makeshift director’s chair that reminded her of the chairs on the set of the TV show she had done as a pre-teen called the Ratty Rat’s Fun Crew. Fifteen years later and she still liked to sit in the taut cloth seat with her leg draped across the arm, leaned back against the stretched black fabric. Anything that relaxed her before a show fit the bill right now.

Since she sat backstage with Aaron’s back-up singers and dancers, she felt comfortable with this group. She wore black shorts along with her black leather bra until showtime. Then she would swap the shorts for a matching black leather skirt and heels that would kill her feet as she danced around in them for over an hour on stage. Thankfully, tonight would be the last show on the tour.

The limber dancers all stretched in different corners of the room. Even in a room far away from the main arena area, Tassia heard the crowds all chanting Aaron’s name, which sucked for the opening act on stage at the moment. She could relate. Tassia knew full well that the sold-out arena full of people would have their full, undivided attention on the headliner, Aaron. She just happened to sing a hook on his latest hit song. One day she would gain some respect and have fans of her own. Now that enough time had been put between her and that kids’ show, she could start making a name for herself.

Tassia rarely gave her attention to the generally foul-mouthed crew that surrounded her.

Most times the backstage area sounded more like a teenager-filled locker room than a room full of professionals working for one of the highest-paid rappers in the game. When she heard the expletive she didn’t flinch. Like she did at ten years old when she had worked on the show, she swung her leg back and forth. Then she heard her name.

“I can’t believe they still play this show.”

The hairs stood on the back of Tassia’s neck as she dared to bring her attention to the wide-screen TV that hung on the wall. It didn’t take her long to notice the taped opening to Ratty Rat’s Fun Crew where she and five other children danced around a man dressed in a rat costume.

A rat. Why the hell did it have to be a rat of all things?

“Aww, Tassia, you were so cute.” A female dancer put her hand to her chest.

“Yeah, look at those pigtails.” A back-up singer pointed to the screen.

Tassia didn’t need to look. She knew what she looked like. For a year, the show pressed her natural hair using a blow dryer and a hot comb so that she could achieve her straight-hair look. With all the dancing she did on the show, by the end of the day, the sweat that had poured from her reverted her hair back to its naturally wavy pattern.

Thankfully with wigs now, she didn’t worry about her hair, still in its natural state. Pretty soon she would see a stylist to get cornrows in her hair to get ready for her vacation. Fuss-free hair on a drama-free vacation.

Although she fought hard to avoid looking at the screen, her gaze fell on one of her kiddie co-stars. Tassia remembered Hyde Love being shy and quiet.

As though a back-up singer had read her thoughts, the woman said, “I can’t believe that chubby kid turned out to be the biggest star out there.”

She turned to Tassia, who now had to bring her leg down and squeeze them together when that familiar school-girl crush returned. “Did you know he would blow up like he has?”

Tassia shook her head. “We were kids. We didn’t know what would happen in the future.”

Yes, she wouldn’t have known that this man would stab her in the back, not once, but twice. It was too bad because at one time, she completely thought the world of him.

The closest Avery Shields expects to get to the music industry is her janitor position at Charisma recording studio, and singing secretly in her local karaoke bar. Working two jobs and studying full-time, she’s doing all she can to earn her parents’ trust after making mistakes in high school. But now a gorgeous stranger is filling her head with dreams of singing professionally—and filling her nights with desire…

Lazarus Kyson’s A&R career took a hit after he was wrongfully accused of harassment. To restore his reputation, he needs to discover a new talent. And when he least expects it, there she is: singing while she cleans the Charisma offices. As stubborn as she is talented, she refuses to audition. If he wants Avery—her voice and her heart—he’ll have to open himself up for the first time for a love too crazy good to let go . . .

R&B singer Chantel Evans had it all, until the Princess of Love Ballads lost everything. First, a very public betrayal by her lover and the death of her mother lead to a career-ending mental breakdown. Then, at the same time, her attorney makes off with all her hard-earned fortune. The only chance she has of resurrecting her career is in the recording studio her mother left in her name . . .

When struggling country star Truman Woodley has his recording duet with a sultry young singer fall flat at Chantel’s studio, Chantel is faced with a rare second chance—until Truman’s vindictive ex-girlfriend turns the pair’s sparkling debut into grounds for a custody battle over their son. But Chantel has discovered more than sweet vocal harmony with Truman. She’s found something worth fighting for. And when Truman surprises her with a kiss after a live television performance, the whole world will find out just what it takes to be crazy in love . . .

About the author:
Crystal Bright graduated with a B.A. from Old Dominion University with a major in Creative Writing, a minor in Communications, and an emphasis on Public Relations. She earned her M.A. from Seton Hill University in Writing Popular Fiction. She is a member of Romance Writers of America and Chesapeake Romance Writers.

These sound wonderful and just in time for my spring reading list:)

Crazy in Love jumps out at me.

WOW this looks amazing, love the cover and the title. <3 <3 <3 Definitely adding this book to my Must Read File