a love as vast and wild as the West itself... Texas Splendor by Bobbi Smith

Though an Easterner born and bred, Trista Sinclair fell in love with the rugged Texas terrain the moment she arrived to join her fiancé.
Lance Barrett has never been tempted to take a captive until he sees a beautiful woman with hair like spun gold taming a magnificent stallion. 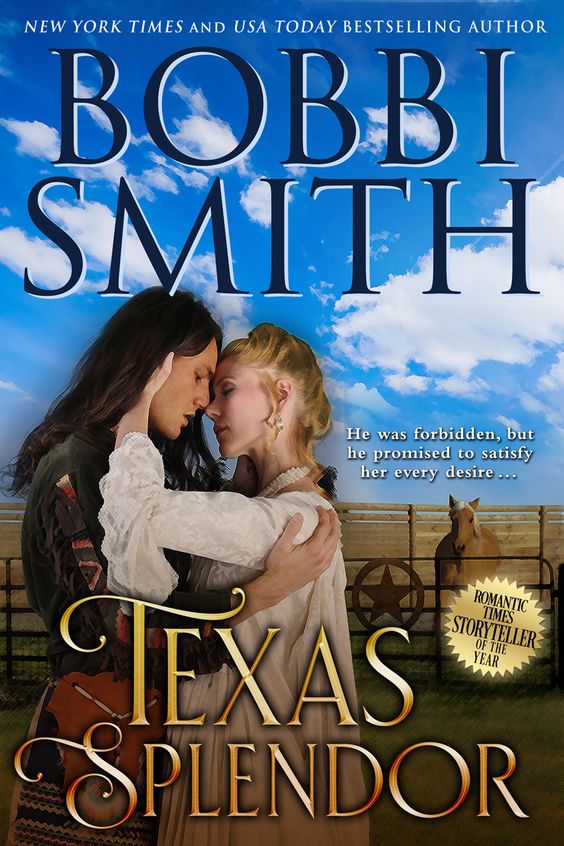 Though an Easterner born and bred, Trista Sinclair fell in love with the rugged Texas terrain the moment she arrived to join her fiancé. But the warnings she heard around the ranch about the dangers awaiting her in the wild terrain of Texas come to life when she is captured while out riding by a blue-eyed Comanche warrior...a man whose sensual touch is far more dangerous than his brute strength.

But Wanted Her Heart And Soul. . .

Lance Barrett has never been tempted to take a captive until he sees a beautiful woman with hair like spun gold taming a magnificent stallion. Trista Sinclair is his half-brother's fiancé, and the perfect means of revenge against the white father who rejected him. Yet what Lance wants most is the one thing Trista swears never to give--her willing surrender. Torn between the life each has known and a desire neither can resist, only together can they claim a love as vast and wild as the West itself...

Lance rode slowly back to the ranch at sundown. During his time alone in the wilderness, he had aged emotionally. The truth of his father’s feelings, coupled with the painful acknowledgment of his mother’s death, had robbed him of his naiveté. His youthful enthusiasm was gone, buried beneath the grim acceptance of the realities of life. After tending to his horse, he started toward the house, feeling more alone than he ever had before.

The house was seemingly deserted as he entered. He was pleased at the prospect of being left alone and was just starting up the stairs when he heard voices coming from the study. Lance knew his father hadn’t wanted to see anyone and grew angry that someone else had been admitted to his sanctuary. He moved to the door to try to identify the man speaking with his father.

“My sister should never have married you! It is because of you she is dead!”

Lance was shocked. His mother had often spoken of her brother, Chief Lone Elk, and of the bad blood between him and his father. The knowledge that the chief was there shocked him.

“She’s dead, I have nothing left! My life is over!”

As Lance heard his father claim again that he had nothing left in his life, he hardened his heart even more against him.

The study door suddenly opened, and for the first time, Lance came face-to-face with his uncle. He met the chief’s gaze.

“You are Lone Elk?”
“I am.”
“I’m Lance. Why have you come?”
“I have come for you.” Lone Elk respected Lance. The boy exhibited none of the fear he’d expected from a child raised by whites. His mother had taught him well.
“Why?” Lance challenged.
“It is what your mother would have wanted.”

Lance knew his mother had always emphasized the importance of learning about his Comanche background.

“Pa?”
George was sitting at his desk, an empty whiskey bottle on the desktop. “What?” His voice was slurred.

“What do you want me to do?” He longed for his father to declare that he loved him and couldn’t live without him.

“Lone Elk wants to take you with him so you can learn about your mother’s people. The decision is yours, Lance.” His voice was emotionless as he looked away.

His answer extinguished what hope Lance held in his heart. Lance silently berated himself for having been foolish enough to think his father cared for him.

“It is what your mother would have wanted,” the chief said.
At his words, Lance looked up at him. “I will go with you.”

About the author:
After working as a department manager for Famous-Barr, and briefly as a clerk at a bookstore, Bobbi Smith gave up on career security and began writing. She sold her first book to Zebra in 1982.

Since then, Bobbi has written over 40 books and 6 novellas. To date, there are more than five million of her novels in print. She has been awarded the prestigious Romantic Times Storyteller of the Year Award and two Career Achievement Awards. Her books have appeared on numerous bestseller lists.

When she's not working on her novels, she is frequently a guest speaker for writer's groups. Bobbi is mother of two sons and resides in St. Charles, Missouri with her husband and three dogs.

Website ** Goodreads
Author's Giveaway
a Rafflecopter giveaway
Posted by CCAM at 9:14 AM

I love the romantic cover

Hi Everybody! Hope you enjoy Texas Splendor. Thanks for having me.

Do you have any ideas for a sequel? Congrats on the release. Bernie Wallace BWallace1980(at)hotmail(d0t)com

There's no sequel for Texas Splendor, but I've got a lot of other stories out there if you want some more. bobbismithbooks.com

This sounds like a really good read. Cool cover.

My family and I all appreciate you bringing to our attention the book description of another great book to read. Thanks so much!