They could hurt you - Break the Bodies, Haunt the Bones by Micah Dean Hicks

“Hicks has crafted a haunting story with multi-generational appeal, where the very real horror of poverty meets supernatural horror, and social issues like xenophobia, racism and economic anxiety are addressed organically through allegory and gripping storytelling.” ―Chris L. Terry, author of Black Card and Zero Fade 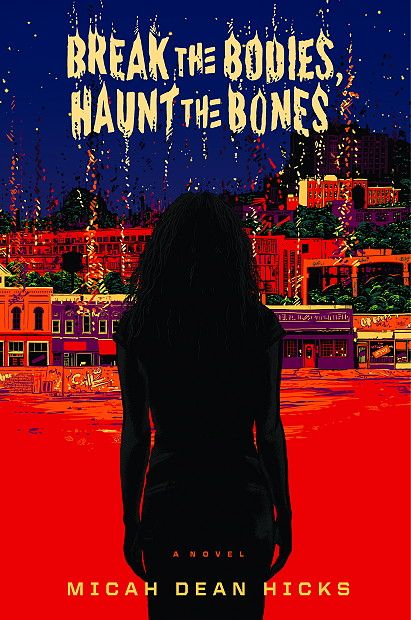 Swine Hill was full of the dead. Their ghosts were thickest near the abandoned downtown, where so many of the town’s hopes had died generation by generation. They lingered in the places that mattered to them, and people avoided those streets, locked those doors, stopped going into those rooms . . . They could hurt you. Worse, they could change you.

Jane is haunted. Since she was a child, she has carried a ghost girl that feeds on the secrets and fears of everyone around her, whispering to Jane what they are thinking and feeling, even when she doesn’t want to know. Henry, Jane’s brother, is ridden by a genius ghost that forces him to build strange and dangerous machines. Their mother is possessed by a lonely spirit that burns anyone she touches. In Swine Hill, a place of defeat and depletion, there are more dead than living.

When new arrivals begin scoring precious jobs at the last factory in town, both the living and the dead are furious. This insult on the end of a long economic decline sparks a conflagration. Buffeted by rage on all sides, Jane must find a way to save her haunted family and escape the town before it kills them.


GUEST POST
They are dead... or not
Often in ghost stories, the apparition is incomprehensible. The appearance of the ghost tears a violent rift in the world of the characters, but the spirit doesn’t explain why it’s there or what it wants. In his book Literary Ghosts from the Victorians to Modernism, Luke Thurston explains that characters often force meaning onto the ghost. Usually, the characters carry some heavy secret or trauma. That secret weighs on them, and when the ghost appears, the characters look inside themselves to make sense of it. They see the ghost as a truth event, speaking something that they’ve kept hidden.
In Nathaniel Hawthorne’s The House of the Seven Gables, the family has a secret: Colonel Pyncheon, family patriarch, wrongly accused a man of witchcraft and took his house after the man was executed. When Pyncheon dies in his chair soon after taking possession of the home, his family sees it and all the strangeness that follows as punishment for their sins.
The same with Toni Morrison’s Beloved. When she was a slave, Sethe ran a saw across the throat of her daughter to spare her from a life of slavery. Now free, Sethe’s house is haunted, and one day a strange woman shows up on her doorstep, calling herself only Beloved. Since Sethe had the word “Beloved” written on the grave of her daughter, she takes this young woman to be her lost daughter reborn, and the selfish and violent girl makes Sethe’s life harder. It’s ambiguous throughout whether she is really Sethe’s daughter or something else. What we know for sure is that she is without origins, unknown to the community, completely unexplainable. So Sethe gives her the only explanation she has.
In Shirley Jackson’s The Haunting of Hill House, Eleanor’s sister left her to take care of their mother alone until the woman’s death. Eleanor is full of grief, anger, and guilt. When a doctor asks her and two others to spend time at the purportedly haunted Hill House, unexplainable things begin happening. Temperature fluctuates wildly. During a storm one night, something like a dog gets loose in the house and can’t be caught. Time passes irregularly. People shouting only one room apart can’t hear one another. And toward the end, a heavy figure is heard stomping through the halls and slamming its hands against the doors while the characters wait, terrified. Eleanor is affected the most by the haunting, and the house even begins leaving messages for her: “Help Eleanor Go Home.” Eleanor decides that the haunting must be connected to her mother and her own resentment, though the novel never makes that explicit.
In all of these novels, in their fear and need to understand a haunting, characters dig through their pasts for the worst thing they have in them and project that onto the unknowable.
My novel Break the Bodies, Haunt the Bones works a little differently, though. Ghosts possess Jane, Henry, and many others in the town. These spirits inhabit their bodies, speak inside their minds, and force my characters to live out the desires of the dead. The people of Swine Hill get up in the morning with their phantoms and go to bed with them at night. They know their haunts intimately.
Jane’s ghost, the spirit of a child desperate to know and understand, bombards Jane with the cruel thoughts of everyone around her. Her brother Henry is possessed by the ghost of an unhappy inventor who forces him to make horrifying machines. And Jane’s boyfriend, Trigger, carries the ghost of his dead younger brother, a spirit that blames Trigger for its death and exists only to ruin his life.
What the spirits want in my novel isn’t a mystery. It defines them, every ghost reduced to a single, desperate need. The ghosts in Break the Bodies, Haunt the Bones are frightening because of their humanity, not their inhumanity. They are obsessive, controlling, wed to a vision of the world that’s long past. The dead and the living might love one another, might consider themselves friends, but the ghosts’ selfish need to matter again crushes those they haunt.
Jane and Henry’s story is not one of confrontation with the unknowable, but one of deadly intimacy, a story of how the people closest to us can hurt us the most. Escaping a haunted house is so hard when the house is your own, the ghosts your family and neighbors, their dead hands linked so tightly with your own. To escape these ghosts is to abandon a part of yourself.

“A tour-de-force of the imagination. Hicks has created a world that is beautifully and brutally surreal and yet, at the same time, BREAK THE BODIES, HAUNT THE BONES stands as a hyper-realistic psychological portrait of the death of the American factory town. My own identity as an American was disturbed and changed by this novel; some dormant understanding was shaken awake. This is a stunning and profound debut.” ―Julianna Baggott, bestselling author of New York Times Notable Book Pure
“Hicks’ debut novel is a thoughtful tour of the rotted and haunted heart of America. Highly recommended.” ―Jeremiah Tolbert, Shirley Jackson Award-nominated author
“I can’t stop thinking about this book. It’s a haunting story that burrows under your skin like an insect laying eggs that hatch within you in the middle of the night. Hicks’ mesmerizing imagery kept me turning the pages and asking myself ‘How is this book happening? What sort of literary witchcraft am I witnessing?’” ―Maurice Broaddus, author of Buffalo Soldier and The Usual Suspects
“BREAK THE BODIES, HAUNT THE BONES is a breathless wonder of a debut novel… Hicks is a magician with words and has written a spellbinding, haunting and necessary book.” ―Anne Valente, author of Our Hearts Will Burn Us Down

About the author:
Micah Dean Hicks is the author of the novel Break the Bodies, Haunt the Bones. He is also the author of Electricity and Other Dreams, a collection of dark fairy tales and bizarre fables. His writing has appeared in The New York Times, The Kenyon Review, and elsewhere. Hicks grew up in rural southwest Arkansas and now lives in Orlando. He teaches creative writing at the University of Central Florida.