The world is awakening - The Awakening: Part Two (The Lycan War Saga #2) by Michael Timmins

"The characters are lovely, unique creatures, with varied pasts. The author does a great job of getting you engrossed in their lives. I couldn't wait to see what each one was going to do with their "New bodies."


Mr. Timmins has created a fantastic base for his series and I look forward to his next book(s) with great anticipation."- Reviewer 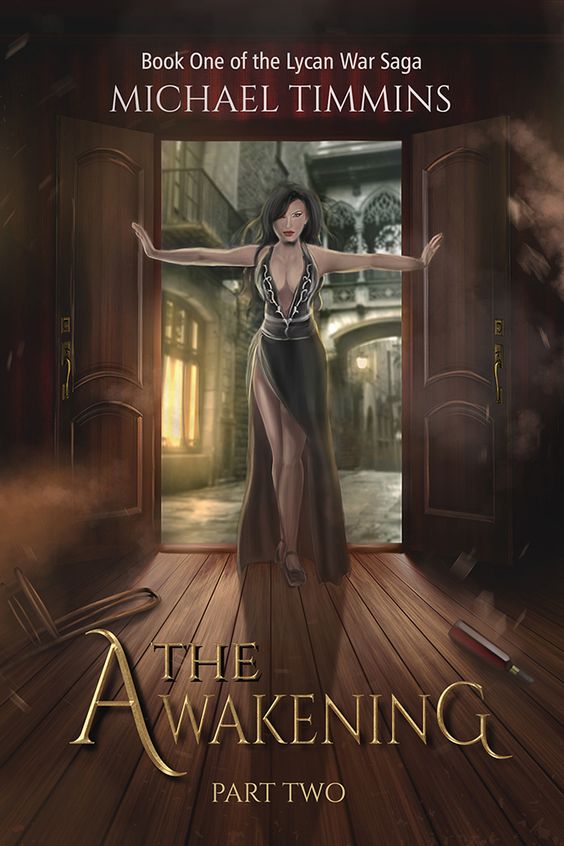 The world is awakening

The monsters of myths and fairytales walk among us.
While Clint, Shae, Kat and Blain awaken to their powers, the others have too. Realizing that they are not like everyone else, and that they aren’t alone.
Samuel, who was once known as Syndor, has managed to survive all these years preparing for Kestrel’s spell and her arrival.

Five of the original eight bloodlines have awoken, but what of the others? How will their awakening happen?

Sylvanis continues to grow at a rapid rate, much to the bafflement of her parents, but her body recognizes the need and responds. Now, she must make a desperate gamble to call out to her Lycans, knowing Kestrel will be able to find her if she does.

Blood has been spilled already, but the war has only just begun!

At first, he went crazy with it and bought candy, video games, and whatever he felt like. When Hank asked him how he was going to buy a car when he turned sixteen since he kept spending all his money, Sim went on a spending freeze. Apart from an occasional personal reward, he saved every coin. Now, he had enough money to buy the car he wanted, though it took him a whole year beyond his sixteenth birthday to do so.

Closing his eyes, he pictured the car in his head. He was visualizing opening the car door when a scream from up the stairs shattered the vision. Panicked, he rushed upstairs. Never in his entire life had he heard someone scream like that. It held so much pain he couldn’t imagine what it must feel like. Mounting the top of the stairs, he peered down the hall towards Hank’s room. It had to be Hank. There wasn’t anyone else here, but the scream was so… inhuman. He wasn’t sure it had been Hank.

Taking measured steps, he moved down the hall to the door to his dad’s room. It was open a crack, as it always was, and Sim paused outside to listen. Someone breathed roughly — like each breath being forced out of a tight chest, huffing and blowing. It was louder than it should have been and once again, heart pounding, he thought of his dad. Reaching for the handle so he could throw it open, the door was ripped from its hinges, like it was made of cardboard and not the solid oak it was, and tossed away into the room to crash further into the room with a loud crash! Something he had never seen before came through, it’s bulk blocking the doorway like the moon blocks the sun in an eclipse.

It appeared bearish, like they do when they rear up on their hind legs, but something was different. Its shoulders were located differently, as if the front legs were more like arms. To further this appearance, where the paws should be, there were elongated, beefy fingers, ending in wicked looking dagger-like claws. Its back legs appeared more capable of allowing the beast to use only its hind legs to walk. Examining its legs, he noticed something more shocking. Shredded strands of blue and white cloth dangled down from the creature’s waist, like streamers, hung from a blue waistband stretched to its limit. Sim recognized it because it belonged to his father. It was his favorite sweatpants he frequently wore to sleep in. Noticing all this in seconds, the creature’s right claw smashed into him. Slamming into the wall, it was the last thing he remembered.

About the author:
Michael Timmins lives in Toledo, Ohio with his wife and two sons. His inspiration for writing came from his many years making modules to run for his D&D group. It has been a dream of his to one day get his work published, and now with ease of self-publishing, he has made his dream come true.