the collision of empires - The Silver Horn Echoes: A Song of Roland by Michael Eging

"The ending was exceptional – the reader is given just the right amount of perception to build a picture of the final battle, and it made use of heroism, loss, friendship, and objects within the story to make it a truly epic tale. I’d read more books like this, and would watch more films like this. The Silver Horn Echoes: A Song of Roland is an astonishing and proud achievement, and as a reader I feel I’ve reaped the rewards. " - Alex, Goodreads 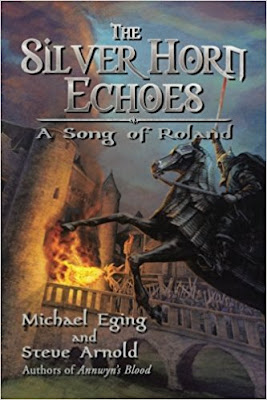 The Dark Ages—a time of great turmoil and the collision of empires!

As the Frank kingdom prepares for war, Roland, young heir to the Breton March, has been relegated to guard duty until a foreign emissary entrusts him with vital word of a new threat to the kingdom. Now Roland must embark on a risky journey to save all he loves from swift destruction.

And yet while facing down merciless enemies, he must also reveal the hand of a murderer who even now stalks the halls of power and threatens to pull apart a kingdom reborn under the greatest of medieval kings, the remarkable Charlemagne.

For Roland to become the champion his kingdom needs, he must survive war, intrigue and betrayal. The Silver Horn Echoes pays homage to "La Chanson de Roland" by revisiting an age of intrigue and honor, and a fateful decision in the shadows of a lonely mountain pass—Roncevaux!

" I could still hear the clash of swords and the screams of dying men after I put the book down. [...] This is a truly epic tale which will resonate with many readers and which does honor to La Chanson de Roland." - N.A. Granger, Goodreads

Goodreads ** Amazon
About the author:
Michael Eging is co-author of Annwyn’s Blood, as well as a screenwriter and partner at Filibuster Filmworks. He and his wife have five children and live in Virginia. Steve Arnold lives in Ohio with his wife and kids. Besides co-authoring Annwyn’s Blood, he has corroborated on everything from short stories to screenplays for Filibuster Filmworks.

Sounds exciting! Thanks for sharing!