"This was such a complex story, it had so many scientific elements and yet it was so rudimentary at its core. The talk of other dimensions and reincarnation, they are at opposite ends of the spectrum. One leads you to think of science and the other at religion. And though it appears to be so antagonistic it is really wonderfully woven. You don't even feel when you've crossed the gap between proof and belief." - Kitlina, Goodreads 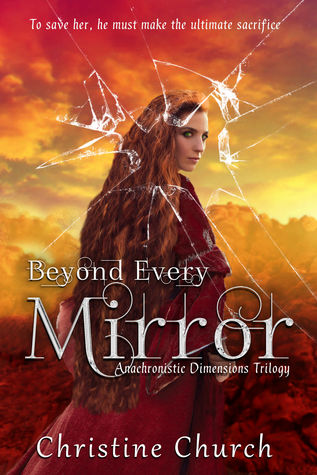 His death is the only thing that can save the life of the woman he loves.

Beside his own image, Dane Bainbridge sees another; a ginger haired beauty--behind her, red mountains and clouds as if from another world. He's seen her his entire life, a life filled with glamour and fame... and loneliness. For the woman in the mirror is his one true love. But, this he does not know, not until he is dragged into her world--one of beasts and lands beyond imagination. One where his sacrifice is the only thing keeping her and the world in which she resides alive.

Once they are together, he remembers it all, and that knowledge means his doom for all eternity. But if he escapes her world, she will perish as will all others behind the looking glass. He is the key that keeps her alive, and she is the key that gives him hope. Can they break the curse that keeps them separated by torture and death? Can they escape together from a world that exists beyond every mirror?

No! Not here!
Her thigh-length ginger hair was loose, rather than pulled back in the usual braid. The shining tresses poured over her shoulders like a rushing waterfall and cascaded down a beautiful gown of burgundy velvet that hugged her slim form. The tears in her golden eyes told a tale of sadness that wrenched at his heart, and he felt himself take an involuntary step forward. More familiar to him than Martha or Lance or Sir Kori, the sight of the “Mirror Lady” twisted his gut, a tornado rampaging through him, a tangled enrapture of perplexity and fear, love and pain—as if he had known her for more years than his life was long. And that familiarity drove him somewhere beyond her presence in some glass.
His dilemma with the redhead in the front row disappeared.  The girls he’d met in the past or would meet in the future no longer mattered. It was this stranger, this illusion. She alone meant everything—and she scared the hell out of him.  But deeper than fear lie an unbearable urge to leap into the mirror and gather her into his arms.
Protective impulses tugged at him relentlessly and he was suddenly frightened not of her but for her. Terror seized his heart, and refused to let go, pounding through him harder than the music that continued to fill the stadium, confusing him profoundly.  Passionate emotions thrashed at his brain and his head ached with the need to bring them to the surface.  But he couldn’t.  A mental barrier walled off the needs screaming for release.  Why couldn’t he just go to her; feel for her the love he’d been missing his entire life?
Behind him, the glass’ surface reflected a flurry of activity; lambent light bounced from one mirror to the next, heightening the pain in his head.  The small section of audience visible moved and swayed, their images like dancing ghosts in the dark mist of the stadium.  Stephan’s long strawberry hair swayed as he bobbed his head up and down while he plucked away at his bass. He hadn’t seen her.  At the time Dane didn’t think anyone else saw her, but her form was as solid in the mirror as was his own, as she had been in every mirror throughout his life.
Concentration became impossible. He faltered, his voice cracked and he missed the chorus altogether. Familiar with the music, the mistake must have been quite obvious to the crowd. But he couldn't turn from that damn mirror.
Dane tried to force his mind back to the song when a searing bolt of pain sliced through his head. The clank of the sword and the microphone sounded loud to his ears, even above the music, as they dropped from his hands and crashed to the stage. Feedback screeched from the monitors and the music stopped. The burden of emotion and conflict pressed him downward and, like Alice, he found himself falling. Down. Down. The spotlights swirled like shooting stars and agony screamed through his shoulder as he hit the hard stage floor.
The fog consumed him.
The stadium went dead silent. Bruce and Stephan rushed towards him. Adrian leapt from behind his drums. Road crew members and strangers circled above. The audience pressed closer to the stage, security guards frantically tried to hold them back.  Their lips moved, their hands pounded the stage. He saw them all, yet he heard nothing. And then he was forced into a vacuum of darkness. 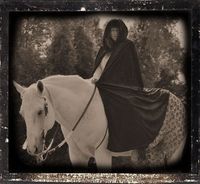 Christine Church has been writing since she was 9 years old. As a kid, she wrote and drew her own picture books, then moved on to short stories as a teen. By her 20's, she was writing full-length novels, but her first success in publication was a nonfiction book about the care of indoor cats, Housecat, published by Howell Book House in 1998. Several more nonfiction books followed, including the major award winning book, Indoor Cats (TFH publications), which won the Iams Responsible Cat Ownership in 2001. After a broken hand, she took a hiatus from writing for quite some time, then returned to find everything had changed and her world turned upside down. She decided then to take a stab at self publishing. Her first novella, Sands of Time, Fate of the True Vampires won Finalist status in the 2016 Next Generation Indie Book Awards. Her second book, as well as Beyond Every Mirror, have won five-star status on Reader's favorite.

Yes I am! I think this book will be good.

It sounds like a great concept. I don't know that I've ever read paranormal fantasy before; paranormal is almost fantasy in itself already lol