"Hatch has shown a fantastic ability to delve into the criminal mind and set the reader on a fast paced journey through the hidden undergrowth and tunnels of a well loved city. [...]
Hatch needs congratulating on his down to earth, real to life story telling that also takes you on a thrilling ride." - Michelle, Goodreads 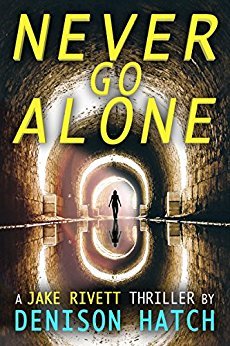 A rash of elaborate cat burglaries of luxury buildings in Manhattan has the police and mayor panicked. When a group of social media obsessed millennials—a loosely organized crew that call themselves “urban explorers”—are suspected in the heists, NYPD detective Jake Rivett is assigned the case.

Already undercover with one foot on each side of the blue line, Rivett is ordered to infiltrate the group and discern responsibility. Battling against both his own personal demons and misgivings regarding his superiors, Rivett dives deep into the urban exploration scene in pursuit of the truth. But what, and who, he finds—deep in the sewers, up in the cranes above under-construction skyscrapers, and everywhere else in New York—will change not only Jake, but the city itself.

"A truly fabulous and entertaining story from start to finish. I already knew that Denison Hatch was a great writer after reading his first book ‘Flash Crash’ (which is also definitely worth a read). He’s put together a great character with Jake Rivett, and a very entertaining and memorable plot. [...] If you enjoy Detective Thrillers, then this is certainly a great book to add to your list."- Todd, Goodreads

Two feet hammered the pavement. With movement as rapid as it was controlled, the explorer’s muscles tensed for what was to come. The target, all twenty stories of unabashedly neo-classical splendor, towered across the street. Infiltrating the building would be easy, but the next step was difficult. And the rest? Brilliant meets impossible.

The explorer was wearing a small camera on his chest, which captured his viewpoint with slightly shaky but high-definition clarity. A parking post stood ahead—cement poured into a strong iron tube. The man sprinted forward and vaulted onto the post. He maintained his momentum, springing off the top of the post onto an enormous industrial air-conditioning unit. Now eight feet in the air, he had only one stride before his next jump. He sailed through the empty air, arms outstretched, fingers tensing—a twelve-foot-high brick wall ahead. Just reaching the wall, the explorer’s fingers grasped the edge. His right hand couldn’t find traction. His fingernails scraped desperately as he started to fall. But two fingers on his left hand did their job. He hung on, swinging precariously before centering himself and pulling his body up and over the wall.

The explorer dropped down on the other side. His body contracted into a tight ball as he careened toward the construction gravel below. At the last moment, he rotated and achieved a rolling landing—lessening gravity’s impact. He came to a stop. Breathing heavily, he took a brief respite from the task at hand. His chest heaved as he peered around the construction site that he’d just infiltrated. He knew that a lone security guard sat in a booth on the other side of the block. But he also knew the guard was engrossed in his cell phone, only stopping occasionally to gaze onto an adjoining street. As long as the explorer was quiet, the guard would be none the wiser. The coast was clear. He reached for a mic attached to the side strap of his backpack.

“All silent. Only one clown in the circus,” the explorer whispered into the microphone. Still out of breath, he reached for his hydration tube and took a long sip of water. Then he rotated and watched as three more compatriots covertly slid over the top of the tall brick wall.

They each hit the ground in the same rolling manner, limiting trauma with expert precision. The entire crew was clad in dark outdoor technical clothes, breathable shirts, top-of-the-line Gore-Tex pants and trail runners with all reflective surfaces blocked out by black Sharpie. Their faces were covered by bandanas or ski masks. Respirators, climbing gear, knives, and cameras were both hanging from and strapped to their belts and backpacks.

The crew split in three different directions, acting as lookouts for any errant guard or construction manager onsite in the middle of the night. It was unlikely, but their plans called for extreme caution. That’s what had made them so successful—their secret sauce was not daring; it was preparation. After confirming that the others were in position, the explorer focused on the mission at hand.

An enormous tower crane stood against the edge of the construction site. Built like a towering T, the machine’s base was a concrete shithouse holding up three hundred feet of crisscrossing steel. The explorer expertly grabbed the side of the crane. Instead of heading for the control booth at the bottom, he simply began to ascend up the latticework that made up the sides—hands followed by legs on an upstream ladder.

Stopping midway to catch his breath, the man couldn’t help but look down. Vertigo’s tendrils reached out like forbidden fruit. His foot wavered to catch hold of a one-inch bar of the latticework. But he controlled the panic, centered himself, and continued climbing.
A few minutes later, the explorer reached the top of the crane. He pulled himself over the T’s edge and gazed along the hundred-and-fifty-foot-length atop the long horizontal span. Instead of traversing in the direction of the construction site from which he’d originated, the explorer headed the opposite way. Careful with the placement of his feet, he headed towards the side of the crane that extended halfway across the street below. It was a slow process. The latticework consisted of both ninety-degree and diagonal pieces of steel, like a series of bars with a crosshatch pattern strung across it. And between the pieces of the crane’s structure was nothing—a dark void. One misstep, one hesitation, one dash of grease and the explorer would plummet over twenty stories through thin air and become one with the blacktop of the city. It was not a pleasant thought, making the already difficult process deeply nerve-wracking.
“You will not bust.” The man talked himself through the fear as he reached the far end of the crane. He was now extended as far across the street below as the machinery would take him.
The explorer gazed down the gleaming city from the Upper West Side, all the way through Midtown and into Chelsea. It was more than a place now, more than a landscape. By this point at its evolution, Manhattan represented a geospatial-and-social coordinate on the razor’s edge of modernity. It was no longer what the future could be. It was the future itself, right now, happening in front of one’s eyes and reaching the stage of infinite singularity. As the years had gone on, the surfaces of the metropolis had become smooth, the lights perfect, the façades utterly complete. It no longer beckoned for the masses humbly—it repelled them. The construction site the explorer had ascended from would soon consist of glass, marble, and sex. That was all, and that was everything, and if one was rich enough, one could buy it. The new culture didn’t care for culture itself. It did not bow to subtlety of argument or freedom of soul. It only knew money—astronomical levels of money. The only people who could afford to live here would be the progeny of sovereign wealth fund managers, tech moonshot winners, and industrial titans. Nothing was free, for anyone—not even the views.

Except for our explorer—right now. It was his, alone. He admired the panorama of New York. Yes, there was the mission, but this was deserving of a photograph. He pulled the camera off his chest harness, activated selfie mode, and turned it towards himself. He lined up, framing the background of the city behind him. Click. The camera’s flash erupted. He flipped his hand down, as if to form an upside down V slogan. Click. Another flash—another selfie—his face shrouded by a hood throughout the entire process.

Having finished memorializing the scene, the man ducked down towards the crane. As he secured something to the crane, he gazed away from the construction site and towards his target.
A sharp contrast to the modern structures popping up like weeds, the limestone apartment building across the street was built during the turn of the century—the last century, not this. Its hulking body did not undulate as it rose. Instead the building consisted of strong vertical bands that ran up to form elaborate choragic arches and support the pointed top of the roof. Four large penthouse balconies graced each corner of the building, easily visible to the explorer who stood above them on the crane. He breathed deeply, then jumped off the crane into the darkness below.

Suspended by a climbing rope, the man careened from the top of the crane and over the street, until he was positioned directly above the penthouse balcony of the old building. The pendulum continued, however, and he swung back.
The second time he was ready. His toes landed lithely on the penthouse’s balcony. He paced towards the enclosed glass greenhouse. One of the small windows of the greenhouse was unlatched, exposing a sliver of access.
The explorer carefully maneuvered the window open.
He climbed into the penthouse.

And the city’s lights twinkled as if nothing had happened at all . . .

Goodreads ** Amazon
About the author:
Denison Hatch is a screenwriter and novelist based in Los Angeles. Although he lives in the proverbial desert now, he is originally from Delaware—land of rolling hills and DuPont gunpowder. Denison has a number of feature and television projects in development, including his original screenplay, Vanish Man, which is set up at Lionsgate. A graduate of Cornell University, Denison lives with his wife and big dog in a little house in Hollywood. Never Go Alone is the second novel in the Jake Rivett series.