"This is a wonderful conclusion to a really fun series.
[T]his was a fascinating story of an alternate world told with heroism, love, and hard-work. I really enjoyed it and would love to see some novellas from this series in the future!" - Olivia, Goodreads 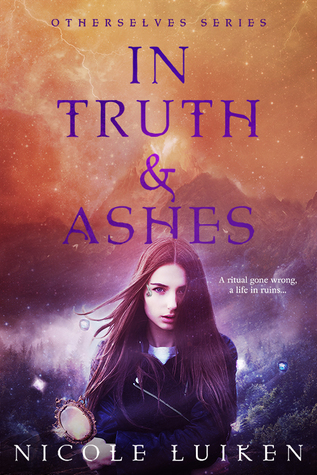 What she can’t remember could ruin her life.

The Mirror Worlds are but dull reflections of the True World, where magic and technology blend together…

On the True World, Belinda Loring has known from childhood that she must Bond with the son of another noble First Family. Uniting the families ensures hers will hold onto its powerful position, and so she’s always pushed down the tender feelings she has for her best friend—gorgeous, steadfast Demian, who isn’t noble.

But when the ceremonial magic goes disastrously wrong, Belinda becomes a national disgrace. Scorned as Broken, she turns to Demian for help getting revenge on the man who ruined her: the radical Malachi.

But the seeds of Malachi’s murderous plans lie buried in Belinda’s past, in the dark days of her kidnapping—a period of which she has no memory. And Demian may hold the key to recovering all that she’s lost—and saving the worlds.

1. There is one True World, and then there are the four Mirror Worlds: Fire, Water, Air, and Stone. How did you come with the idea of only one True World? What is the significance of the True World?
I came up with the concept of otherselves--mirror twins on different worlds--and then came up with the True World to explain how the mirror worlds came about. According to the mythology that I invented, the True World was built by the god Aesok ,and the Mirror Worlds are inferior copies made by his brother Besok. The True World is the only world that possesses both advanced technology and magic. The True Worlders are also the only ones who know about the other worlds’ existences. This gives them a huge advantage in that they can skim off any exciting new technology or magic invented on any of the four Mirror Worlds.

2. Each of the books of the Otherselves series has different characters. Why that? Which are the pros and cons to let all of the characters to meet together?
Leah is in all of the books. She is the main series character and has an overarching plotline. It’s my hope that her presence and the fact that all the main characters are “otherselves” unifies the series. Using different characters in each book allowed me to explore each world in more depth, from the inside rather than as a visitor. It also helps alleviate the symptom of “sagging middle” which second books in trilogies often suffer from and makes it easier for readers to read the books out of order without becoming lost.

3. Which do you think are the taboo subjects for Young Adult (Fantasy) stories and why so?
I don’t know if there are taboo subjects for YA fantasy; I only know that there are some subjects I personally don’t want to write about. I also I feel strongly that serious issues shouldn’t be written about lightly. If, for example, your main character is a drug addict, it would be a disservice to the reader to show the character being magically healed of the addiction in a mere chapter. One thing fantasy and science fiction is very good at is allegory. By presenting an issue disguised in fantasy terms, it’s sometimes possible to get a reader who has already made up their mind on an issue to see a different side of it.

4. Which are your preferred YA themes and what do you do to keep the story lines fresh and original?
Story comes first for me. Theme is something that I tend to discover AFTER the first draft is already written; it reveals itself in how the characters react to the problems I’ve set them.

One of my recurring themes boils down to “Prejudice is bad.” When I planned out the Otherselves series, I deliberately made each hero and heroine come from different social stratas. For example, in In Truth & Ashes Belinda comes from a noble family. She’s been taught that it’s her duty to marry into her own class. Demian isn’t from a First Family, and because of this Belinda makes a number of wrong assumptions about him. By the end of the novel their social status has flipped: Demian is a demi-god and her magical talents are lesser than his.

5. Between YA and Adult stories which are harder for you to write and why? Is there any true “unlimited freedom” when writing Adult stories?
Because I mostly write YA, I sometimes struggle to make the “voice” of my adult work sound mature enough.
As to “unlimited freedom” I would say that every genre has its own set of conventions and you break them at your peril. If you write a mystery that’s unsolved at the end or that ends with an injustice, readers will be up in arms. Similarly, if you write a romance but fail to provide a Happy Ever After, readers will be unhappy. Even “literary fiction” has a certain set of expectations. For me SF and fantasy settings provide the most flexibility, which is why I write them--I don’t like being hemmed in by reality!


TOUR SCHEDULE
Through Fire & Sea (Otherselves #1) is on sale for 99 cents for the month of January
Goodreads ** Amazon ** Barnes&Noble ** iTunes
About the author:
Nicole Luiken wrote her first book at age 13 and never stopped.
She is the author of nine published books for young adults, including Violet Eyes and its sequels Silver Eyes and Angels Eyes, Frost, Unlocking the Doors, The Catalyst, Escape to the Overworld, Dreamfire and the sequel Dreamline. Through Fire & Sea, book one of Otherselves, and Amid Wind & Stone, book two of Otherselves, are her most recent releases. She also has an adult thriller, Running on Instinct, under the name N.M. Luiken and a fantasy romance series, Gate to Kandrith and Soul of Kandrith.
Nicole lives with her family in Edmonton, AB. It is physically impossible for her to go more than three days in a row without writing.

What would you do if you learned that the world you lived in was a reflection of another world, not the true world?
It would absolutely blow my mind

I'd probably smash the mirror. I don't want to live in a world that could be worse than this one. :)