"Fantasy stories are a harder genre for some people to read. Many have trouble keeping characters straight or events while others just don’t like the fantastical things that can happen in fantasy novels. Terri Rochenski writes wonderful novels that are not only easy to follow but keep you interested till the last page. I completely enjoyed this two part story and hope to read more of this author’s books in the future." - Rachel, Goodreads Thrust out of their homes by a human High Priest on a vengeful mission, the Natives of Derlund no longer have a place to call their own. One escaped capture, however, and now she, Hyla, is the only one who can save her people.

For, Hyla, though, saving her nation isn’t her ultimate goal—returning to the Pool of Souls is. Becoming its Guardian and preserving their faith is her heart’s desire. The perils of her current journey, though, could leave her unable to fulfill that dream.

To find her way back to the Pool, Hyla must live among dangerous, powerful humans willing to defend the Natives, and must submit herself—her Talents—to them. While her protection is paramount, plots to end Hyla’s life will push her to her physical and emotional limits.

On the edge of sanity, her courage tested, and convictions nearly broken, Hyla’s final test of loyalty to her faith comes with the death of one she could have loved.


"Each chapter offers something new as war approaches, secrets unfold, and Hyla is put into situations she’d rather avoid. There’s romance, and suspense due to impending war and other events that put Hyla, Conlin, and Jadon in danger. There are a lot of entertaining twists. The ending was a perfect conclusion that tied up all the loose ends and answered lingering questions." - Chrys, Goodreads

That should be Hyla’s first thought as her people are chained and imprisoned for no imaginable reason.

Instead, Hyla finds herself traveling through a land void of Natives, with human soldiers pillaging in desperate pursuit of her, and in search of the mystical Pool of Souls—home to the one man who can save her people.

Or so she believes.

Led by her faith in the deity Fadir, Hyla is met along her journey by Jadon—a human male and fierce King’s warrior, and his childhood best friend Conlin—one of the few Natives aware of his Fadir-given Talents.

Protected by Jadon, guided by Conlin, and with an unfailing belief in the purpose of her pilgrimage, Hyla carries on.

Like her, though, another searches for the Pool, and should he gain access first, everyone she loves, and everything she knows, could be lost. 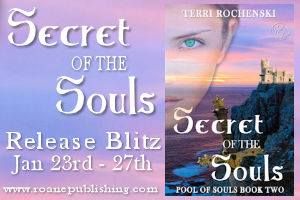 About the author:
Terri started writing stories in the 8th grade, when a little gnome whispered in her brain. Gundi’s Great Adventure never hit the best seller list, but it started a long love affair with storytelling.

Today she enjoys an escape to Middle Earth during the rare ‘me’ moments her three young children allow. When not playing toys, picking them back up, or kissing boo-boos, she can be found sprawled on the couch with a book or pencil in hand, and toothpicks propping her eyelids open.