Read our review for book #1 HERE

"We have to go through Hell to be strong enough to get to Heaven" - Watchers
"If you are going through Hell, keep going" - Winston Churchill 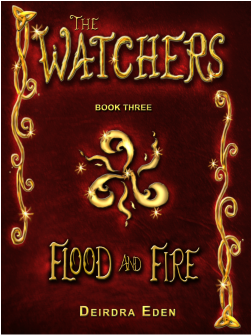 
Auriella joins the ranks of the Immortals, but Azrael has vanished in the depths of war. She is forced to choose between love or loyalty when the druids charge her with finding Alamar, an unruly Watcher who can control the seas. Though witty and charming, Alamar and his blood thirsty friends can’t be trusted. Now, it’s a race against time to find Azrael before he is killed, and Alamar before he is recruited by the Shadow Legion.

The Watchers Series has been described as Braveheart meets Supernatural. The mythology for the series is based on many theological texts from dozens of sects with correlating themes. Ancient writings include the Dead Sea Scrolls, the Traditional Apocrypha, the Pearl of Great Price and the Kabbalah. The Watchers are supernatural beings in human form whose duty it is to protect and guard mankind from the armies of darkness. Unfortunately, as the Book of Enoch mentions, some of these Watchers go bad.

Deirdra Eden's, The Watcher's Series, is written in a traditional fairytale style with a young girl's discovery of incredible, but dangerous powers within herself, a cast of humorous side-kicks, a quest for greater self-discovery and purpose, and villains of epic proportions.


Buy Flood and Fire on Amazon on December 14th, 2016 and get 3 FREE ebooks!
Just email a copy of your order to edenliterary@gmail.com and they'll send you 3 free ebooks.
Goodreads ** Amazon 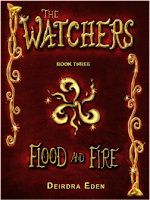 Deirdra Eden has spent the last decade captivating audiences of all ages with her Amazon Bestselling novels and fairy tales. Her specialty is paranormal theology that delves into documented historical phenomenon and natural disasters of biblical proportions that entices indulgence of a fine line between fact and fantasy.


Deirdra enjoys jousting in arenas, sword fighting and archery, planning invasions, horseback riding through open meadows, swimming in the ocean, hiking up mountains, camping in cool shady woods, climbing trees barefoot, and going on adventures with her family.
Connect with Deirdra and The Watchers