for better or for worse - Water & Blood by B. Kristin McMichael

"B. Kristin McMichael is an amazing writer. I have enjoyed every book that I have read by her. Her stories flow skilfully. Her characters are well developed. They contain mystery, action, and drama. Her stories are creative and original. I’m anxiously awaiting the next book in the trilogy."- Diane, Goodreads 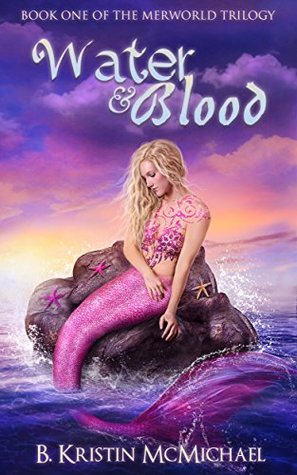 Beaches, sun, and swimming was what Whitney thought she’d get when she moved all the way across the country to the Atlantic Coast. It was a chance to start over, a fresh start outside the paranormal night human world she grew up in. She was ready to be a normal human; one who didn’t have to worry about drinking blood or all the fighting that went on in that world.

Perfectionist Sam did everything well. He protected his family and friends as he swore he would. He had jobs to help everyone survive while they hid in plain sight. He even taught swimming lessons. His life was perfect, at least until Whitney showed up in his town. Without thinking of the consequences, Sam makes a choice to follow his heart for a change. That choice changes everything, maybe for better or for worse.

After one year of getting used to her new reality, Whitney discovers that maybe she was never meant to leave the night human world after all. Deciding to take swimming lessons, she is paired with high school hottie, Prince Sam as her friends called him. That one decision changes her life, and she’s quickly thrown right back into the night human world she thought she was getting away from. The only question is: Can she survive going back?

Tipping his head back, Sam stared at the clouds. Life would have been much easier if the other night humans knew about the sirens. They would be free to stay on land as much as they wanted, and he would have access to blood banks and not have to trick day humans into swimming lessons to feed himself. And his job of keeping the land sirens safe would be so much easier if they weren’t running around hungry all the time. He hated the way everything had turned out. He understood it, but that didn’t mean he had to agree.

The splashing in the pool had stopped. Sam looked down to see whether his student was taking a break or she was done for the day. She wasn’t at her twentieth lap yet. By his calculations, she was only at fourteen.

Jumping up from his seat, Sam dove effortlessly into the pool and across the width of the lanes without surfacing for breath. Yes, some wandering day human too close to the pool could have seen, but it was an emergency. Whitney was floating face down in the pool, and she wasn’t just holding her breath.

In one swift motion, Sam lifted Whitney’s lifeless body out of the water as he emerged from below her. He immediately jumped out beside her. Without hesitating, Sam began to breathe into her mouth. Her heartbeat was slowing. He didn’t need to feel for a pulse; his senses told him that much. Sam blew into her mouth again, trying to get air to her body.

With her blonde hair matted to her, Whitney lay there limp and unresponsive. Sam stared at her. Even on the verge of death, he was pulled to her, but now his siren instincts were taking over. He had seen his share of people dying from drowning, and they all looked as appetizing as she did when she swam. Now as she was dying Sam realized he didn’t want to feed on her, he wanted to keep her alive.

B. Kristin graduated with her PhD in biology at Ohio State where she worked as a scientist before taking her passion of writing full-time. Besides writing, she enjoys chasing her kids, playing outside, and baking cookies.

B. Kristin McMichael lives in Ohio with her husband and three children. If you don’t find her writing, then she probably has a book in her hand. Make sure to stop by and say hi on her social media.