I think it was inevitable that my years of writing historicals would find a way to touch my science fiction work, and I had a lot of fun, and gave a lot of thought, to the use to which I put my historical background. I think fictional cultures with some basis in real culture, however much of a mix they are, make for a more believable, more interesting world, and I hope my readers think so, too. - author 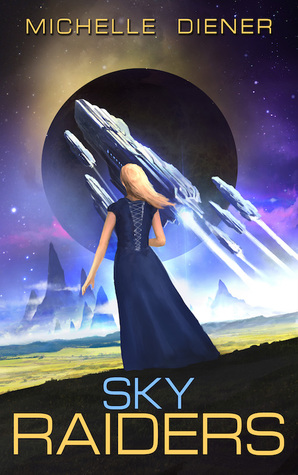 First they flew their mysterious sky craft through the skies of Barit. Then they started attacking. Finally, they began to raid.

Garek's one year of duty as a guard walking the walls of Garamundo was extended to two when the sky raiders appeared. Two long years away from home and his lover, Taya. When he finally returns, the town is empty. While Garek was protecting Garamundo, the sky raiders were taking their victims from his hometown.

Taya can't bear looking into the night sky. All she can see is Barit, her home planet. Impossibly, the sky raiders have brought her and their other victims to Shadow, the planet that shadows her own, and looking up makes her aware of everything she's lost. Garek is out there somewhere. She knows he'll look, but he'll never find her.

She and the other captives have to find a way to escape. Without the food and clothes the sky raiders bring them from their raids on Barit, they'll starve on the almost barren wastes of Shadow. And when they've given the sky raiders enough of what they want, that's exactly what the sky raiders will leave them to do.

What Taya doesn't realize is she'll have some help with her plan. Because Garek isn't giving up on finding her. And he's even more resourceful than she could ever have imagined.

Nothing is going to keep him from Taya. Not even space itself.


Some books take longer than others. :) I wish they all fell onto the page with no effort and much joy, but that's not how it goes, sadly. I started writing Sky Raiders back in 2013. I wrote, and then I stopped, and then I wrote some more. Then I put it aside completely as I worked on the Class 5 series.

The reason for this is that the story was still brewing in my head. The cultures and world I wanted to build on my imaginary planet of Barit, the overreaching arc of the series, needed time to come together in my head.

I would think of it fondly, play music I associated with it (like Flora's Secret by Enya, which is what I imagine was playing in the heavens when Garek and Taya lay together in the meadows above Pan Nuk) as I worked on the Class 5 series, and looked forward to working on it when the time was right.

When that time came, I knew I'd done the right thing. Writing Sky Raiders was still challenging, but my subconscious had done a lot of work for me, and I was able to clearly visualize the world I wanted to describe.

I hope my readers enjoy it just as much.
— Michelle
Goodreads ** Amazon

About the author:
Michelle Diener is the award-winning, bestselling author of the Class 5 series. She writes historical fiction, fantasy and science fiction and lives in Australia with her husband and two children.