"difficult to hit the pause button" - When The Reaper Comes by John L. DeBoer

"When the Reaper Comes Like watching it play out on the big screen in full Technicolor and Dolby, the action from the beginning of "When the Reaper Comes" by John DeBoer was so well laid out, it was difficult to hit the pause button until the last scene played out. [...] Recommended for any thriller fans as well as those looking for a very topical revelation of the current conflict." - Stanley, Goodreads 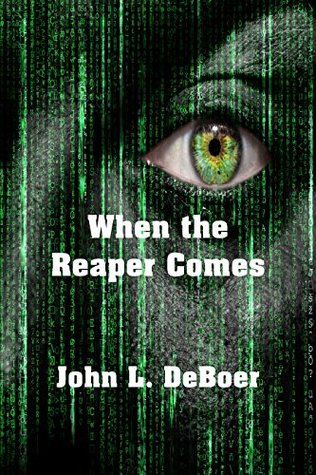 As the NSA gets a strong lead on one of the most prominent faces of ISIS, the Islamic State embarks on a bold course of action—an attack on American soil.

Former Navy SEAL Adam Taylor, on a break between assignments for a global paramilitary security firm, is visiting his folks in his home town when he gets a new mission—provide security for a rock star who is in town for a St. Patrick's Day concert. Unknown to Adam, a team of American ISIS soldiers will soon arrive with a plan to wreak havoc on the Jersey Shore, and Adam will get caught up in a deadly game of wits between the terrorist menace and those tasked to protect the citizens of the homeland.

Abdel Hadad looked down at the drawing Yusuf Khouri had made. He pointed at the X at the rear left corner of the Paramount Theater. “That’s as close as we can get?”

“Without being obvious and thus,” Khouri smiled, “without getting caught.”

“It’s a pretty substantial structure,” Basara said, also standing at the dinette and staring at the diagram on the table. “I checked it out yesterday.”

“I know that,” Khouri replied. “But the point is to cause panic, not bring down the building. When the audience and their entertainment all stampede out of the theater like spooked cattle, that’s when the real action starts. From here” – he put his finger on the sheet of paper – “here, and here.”

Khouri fixed him with a hard look. He knew Basara was not the sharpest knife in the drawer, but his flippant, negative attitude had become annoying. “Muhammad, I live here, remember? I know about the fence. I also know it’s wood. I loosened two boards early this morning. We’ll have a clear field of fire. That’s my job, anyway. You and Abdel will be at the corners.”

“Okay, Yusuf,” Hadad said. “Callahan and the band will come out the service entrance to their bus in the fenced-in lot that you’ll have covered. And Muhammad and I will mow down the people and any cops streaming out the exits. All well and good. But we’re supposed to get away after, right? I don’t mind being killed in battle, but I didn’t sign up for a suicide mission.”

Khouri nodded. “Nor did I, Abdel. The beach is the escape route. Our car will be parked two blocks north and one block west here at the Berkeley Hotel, on 6th Avenue.” He pointed at a square on the paper. “We’ll get away in the panic and confusion. Just a few off-duty cops are used at these concerts for security at the entrances and for directing traffic after. They’ll have standard-issue handguns only. Sustained fire on the place will keep their heads down. By the time reinforcements arrive, we’ll be gone. We’ll take off our ski masks, ditch them under the boardwalk, and head north.”

Basara snorted. “Yeah, just three dudes with AK-47s strolling on the beach in the moonlight. This ain’t Tripoli, man.”

Khouri looked at Hadad as he gestured with his thumb at the other man. “Is he for real?”

Khouri turned back to Basara who was frowning at him, lips tight, obviously not pleased at being dissed. “Look, Muhammad, if you want to back out, now is the time. I’m sure the sheikh will understand.”

Basara glared at him, fists clenched, jaw muscles working, before his shoulders relaxed and he shook his head. “Hey, man, it’s just my way of talking about problems, that’s all. I didn’t mean anything by it. Of course I don’t want out. I’m in this the whole nine yards.” 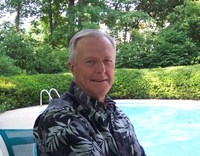 After graduating from the University of Vermont College of Medicine, I did my surgical residency in the U.S. Army at Madigan Army Medical Center, Ft. Lewis, Washington. I then spent three years in the Medical Corps as a General Surgeon before leaving the Army for private practice. Thirty years later, I retired to begin a new career as a writer. I enjoy cooking, tennis, politics, films and film history, the wonders of the cosmos, and, of course, reading. Thrillers is one of my favorite genres, so thrillers is what I like to write. My wife and I (mainly Diane) raised two sons we're proud of and who are pursuing careers having nothing to do with the medical field! After living in Pennsylvania for a number of years, Diane and I settled in North Carolina, where the winters are easy to take and the only weather we get antsy about is the occasional hurricane.

Thank you for participating in my book tour! Although the real-life plot of my story is hardly "mythical," I think many of your followers will appreciate this take of the potential threat Islamic terrorism poses from within. Thanks again.

I really like the cover. It caught my eye immediately.

Good luck with your release!
Michelle

Yes I'd like to read this book. Maybe it will give me insight on how to defend myself when this happens... never know with Trump as president these days.

The book blurb really caught my eye. This is right up my alley.

What most gives me the shivers about this book's Description is that it seems so... ~real.~ I've no question that "When the Reaper Comes" must be excellent, and one hell of a ride!
--Ann