A magic powerful enough to kill... The High Road by Ken Hughes

The High Road is the first book in a trilogy of street-level urban fantasy adventures. If you like heart-pounding suspense, comic-book energy, and Jim Butcher's Dresden Files, then you'll love Ken Hughes's gritty, magical series.

Enter a world of gangs, vigilantes, and magic that’s powerful enough to kill.

Mark has never been the survivor his friend Angie is, but when he rescues a mysterious belt from the flames, it’s a decision that changes his life for good. As the two tap into the secret of gravity-controlling magic, they realize the reason Angie’s family tried to destroy the belt. Flying comes at a cost, to their lives and their sanity.

Fighting back against a street gang with a vendetta, Mark begins to sense that death waits around every turn. Soon he and Angie come face-to-face with the true danger: hidden masters of other magical forces. The keepers of power want the secret of flying, and they’ll destroy anyone who gets in their way.

The High Road is the first book in a trilogy of street-level urban fantasy adventures. If you like heart-pounding suspense, comic-book energy, and Jim Butcher’s Dresden Files, then you’ll love Ken Hughes’s gritty, magical series.

Mark rose upward, floating, like a dream. His feet reached down for the ground of their own accord, but found only empty space.

Upward, forward. The dark shapes of branches met him, scratched along him, as he fended them off with a forearm, hugging the satchel closer, his fingers tightening on the belt within—

What the hell is happening? Where will I stop?

With a shock of fear he grabbed for the branches, but his fingers only closed on twigs that rustled and snapped in his grip. The black sky yawned above. He tried to reach down after the trees as they dropped away below, but he could only thrash his arms, couldn’t lean back when he hung weightless in the air.

I must be fifteen-some feet up—more each second! In the next instant he tried the only thing he could think of: he let the satchel go and bent his knees to tense for the fall.

Except he didn’t fall, he kept rising. He could see the satchel beside him, floating upward on its own. “No no no—” He thrashed in space and stared helplessly around… and his breath caught at the sight.

The branches below were a sea of shadows ruffling in the breeze from behind his back, a breeze that ebbed away into stillness even as he noticed it.

But the wind hadn’t faded, he could see that from the trembling wood still passing by below… because he was being carried within the current now, still rising and floating across it. He gazed around in the gloom: beyond the faint trees and rolling hills of the park just below, the crystalline grid of city lights began to spread before him; the streets’ night-thinned rumbles and honks filtered up to his ears with clearer tones than they ever had down at street level. Even the smells were different, cleaner, at this distance from the ground. He looked down again, to the scattered lamplight along the park’s walkways. Was that a couple walking along?

A rumble of far-off thunder snapped his mind back. The satchel was floating away.

No! He flailed and strained in the air, and managed to snag it again. The damn belt had broken gravity—he clutched it and gasped out “Zha-Daruath!” but this time all the words triggered was a faint tingle.

—A wave of cold washed that tingle away as he stared at the ground, whole stories below him and still shrinking. What if saying those words really had brought him down, all at once?

Or, what if nothing brought him down? More and more of the city drew back around him. Moonlight filtered from above, leading upward forever, forever. His heart hammered. Behind him, the endless black storm bore in, ready to swallow him up. He might as well be naked in the sky.

This can’t be happening! How can Joe Dennard have something that makes you fly… and how could I be so stupid as to grab it and get trapped. 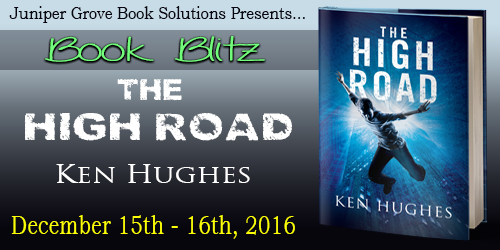 About the author:
Ken Hughes lives in Los Angeles and has worked as a technical writer for missions to Mars and the governing body of the Internet (ICANN). He writes paranormal thrillers and urban fantasy, and has been known to argue over the difference between the two in his blog, www.KenHughesAuthor.com.

His novel Shadowed was nominated for a Global Ebook Award. The series he’s launching with the upcoming The High Road is meant to prove one thing: how writing a thrilling cliff-hanger for heroes who can fly takes writing to a whole new level. (Don’t get him started on puns.)