"Keep your eye on Victoria Evers, her foundation entry for The Marked Mage Chronicles Series, INSIDIOUSis a non-stop unveiling of brilliant characters, a tantalizing plot filled with more twists than a Twizzler all wrapped up into one riveting read! Ms. Evers builds a world where the hook is set within a few pages, then shifts gear into the “reeling us in” stage that never lets up!" - Dianne, Goodreads 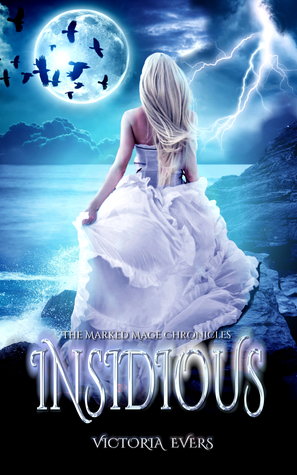 All Kat Montgomery wanted was a fun night out on the town. What she got was a death warrant. As it turns out, the quaint little hamlet of Mystic Harbor, Maine houses more than sandy beaches and adorable B&B’s. Beneath the New England charm rests a deadly world where shifters, demons, vampires, and angelic hunters all vie for power.

A world where magic is the greatest weapon.

After that one fateful night, she can feel the changes beginning to take hold of her. Only problem, she doesn’t even know what she’s turning into. With threats hiding in plain sight, deciphering the lines between friend and foe is nearly impossible. As if things couldn’t get any worse, Kat learns her only real ally rests in the one person she can’t stand: Reese Blackburn, an insufferably handsome magician whom the town fears most.

Kat’s very soul is at stake, and destiny doesn't seem to be playing out in her favor. Can these two unlikely partners challenge fate itself before it's too late?

About the author:
VICTORIA EVERS is a debut paranormal fiction writer who feels really awkward referring to herself in the third person.... When she's not vacationing in Narnia, you’ll probably find her reading, watching horror movies, spending time with her AMAZING family, or daydreaming about the newest story in her head.