I was impressed. I would never have guessed this the author's first book. It's is very exciting, interesting and a true joy to read. - Naturalbri, Goodreads 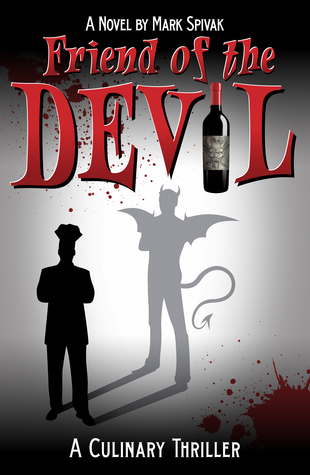 In 1990 some critics believe that America’s most celebrated chef, Joseph Soderini di Avenzano, sold his soul to the Devil to achieve culinary greatness. Whether he is actually Bocuse or Beelzebub, Avenzano is approaching the 25th anniversary of his glittering Palm Beach restaurant, Chateau de la Mer, patterned after the Michelin-starred palaces of Europe.

Journalist David Fox arrives in Palm Beach to interview the chef for a story on the restaurant’s silver jubilee. He quickly becomes involved with Chateau de la Mer’s hostess, unwittingly transforming himself into a romantic rival of Avenzano. The chef invites Fox to winter in Florida and write his authorized biography. David gradually becomes sucked into the restaurant’s vortex: shipments of cocaine coming up from the Caribbean; the Mafia connections and unexplained murder of the chef’s original partner; the chef’s ravenous ex-wives, swirling in the background like a hidden coven. As his lover plots the demise of the chef, Fox tries to sort out hallucination and reality while Avenzano treats him like a feline’s catnip-stuffed toy.


GUEST POST
What Would I Tell a New Author

I’m actively involved in mentoring beginning writers. For the past year I’ve been hosting a Meetup group in my home base of South Florida. Participants send me samples of their work via email, and they receive an intensive, one-on-one critique at the session.

I usually start out by trying to get a sense of the person’s background, their life experience and literary training (if any). I try to discover how much time they have to devote to writing, and whether their literary aspirations are hampered by real-life considerations such as jobs, families and economic pressures. I want to find out if they are someone with a particular story they feel compelled to tell, or whether they want to make writing a career. Either way, my role is the same: to help them master the craft and find their own voice.

At some point, I usually ask them if they are writing to express themselves, or if they want other people to read their work. Either situation is fine, but they require different decision-making processes.

I normally suggest that they pick one piece of work and stick with it until it is as polished as it can possibly be. This is particularly difficult for many people to accomplish. Part of the problem is the current popularity of self-publishing, where you can print anything whether it’s ready or not.

Speaking as someone who has a degree in literature, I think life experience is more important than formal education. If someone is lacking skills in grammar, sentence structure or composition, they can easily take a course at a community college or online.

When I started the group, I was dreading the process of delivering criticism to people. Part of the hesitancy stems from how difficult it was for me to accept criticism at many points in my career, but the truth is that becoming a writer is a long journey filled with criticism and rejection. What I discovered was that in cases where a piece of work was seriously flawed, the writer knew it. They had really come to the group to get a realistic idea of what they needed to do to go forward.

Many beginning writers are yearning to be told that they have talent. I have no problem telling them that, since most of them are indeed talented. Talent, though, is only part of the equation. Most of the process consists of hard work, which is something people tend to resist hearing.

The most important thing I tell beginning writers? Don’t give up. I never did, and I finally succeeded despite a long and difficult journey. With enough determination, it can be done.

Mark Spivak is an award-winning author, specializing in wine, spirits, food, restaurants, and culinary travel. He was the wine writer for the Palm Beach Post from 1994-1999, and was honored by the Academy of Wine Communications for excellence in wine coverage “in a graceful and approachable style.” Since 2001 he has been the Wine and Spirits Editor for the Palm Beach Media Group, as well as the Food Editor for Palm Beach Illustrated; his running commentary on the world of food, wine and spirits is available at the Global Gourmet blog on www.palmbeachillustrated.com. His work has appeared in National Geographic Traveler, Robb Report, Men’s Journal, Art & Antiques, the Continental and Ritz-Carlton magazines, Arizona Highways and Newsmax. From 1999-2011 Spivak hosted Uncorked! Radio, a highly successful wine talk show on the Palm Beach affiliate of National Public Radio.

Spivak is the author of two non-fiction books: Iconic Spirits: An Intoxicating History(Lyons Press, 2012) and Moonshine Nation: The Art of Creating Cornbread in a Bottle (Lyons Press, 2014). Friend of the Devil is his first novel. He is currently working on a political thriller set during the invasion of Iraq.