"BETTER OFF THREAD moves at a good pace and the twists as the story unfolds will keep you guessing. There’s a good blend of suspense, romance, humor, and friendship for a well-balanced story. The small-town setting adds a layer of intrigue to the story." - Mason, Goodreads 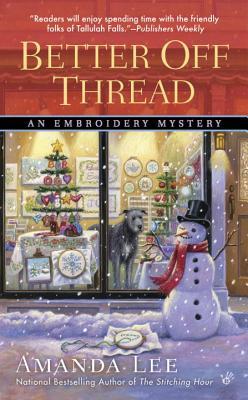 Santa finds himself in a stitch of trouble in the tenth in the series from the national bestselling author of The Stitching Hour...

Marcy is busy helping her customers make hand-crafted ornaments at her embroidery shop, the Seven-Year Stitch. But despite the yuletide bustle, when her friend Captain Moe asks for her help, she can’t refuse—especially when the favor is to play the elf to his Santa for sick children at a local hospital. Despite the ridiculous outfit, Marcy finds herself enjoying spreading cheer—until the hospital’s administrator is found murdered.

Although the deceased had plenty of people willing to fill her stocking with coal, evidence pins the crime on Moe. Now it’s up to Marcy, with the help of her police officer boyfriend Ted and her Irish Wolfhound Angus, to stitch together the clues to clear Moe’s name—before someone else winds up crossed off Santa’s list for good...

"The mystery is well plotted and kept me turning the pages. Character depth can make or break a book for me, and that is one of this story’s strengths."- The Power of Words

"Better Off Thread has all the elements that make a cozy mystery a good cozy mystery."-  MysteriesEtc

The cake decorating series features a heroine who is starting her life over in Southwest Virginia after a nasty divorce. The heroine, Daphne, has returned to her hometown of Brea Ridge to open a cake baking and decorating business and is wrestling with the question of whether or not one can go home again. She enjoys spending time with her sister, nephew, and niece, but she and her mother have a complicated relationship that isn’t always pleasant. Daphne has also reconnected with her high school sweetheart and is pursuing a rekindled romance while desperately trying to put her past behind her. Kerry Vincent, Hall of Fame Sugar Artist, Oklahoma State Sugar Art Show Director, and Television Personality says the series is “a must read for cake bakers and anyone who has ever spent creative time in the kitchen!”

Says Dean Koontz, #1 New York Times bestselling author, “One day I found myself happily reading . . . mysteries by Gayle Trent. If she can win me over . . . she’s got a great future.”

The Embroidery Mystery series features a heroine who recently moved to the Oregon coast to open an embroidery specialty shop. Marcy Singer left her home in San Francisco, along with the humiliation of being left at the altar, in order to move to Tallulah Falls and realize her dream of owning her own shop. She takes along her faithful companion, a one-year-old Irish wolfhound named Angus O’Ruff. She makes many new friends in Tallulah Falls, but she also makes a few enemies. Thankfully, her best friend Sadie MacKenzie and her husband Blake run the coffeehouse right down the street from Marcy’s shop, the Seven-Year Stitch; and Detective Ted Nash always has her back.

Publishers Weekly says, “Fans of the genre will take kindly to Marcy, her Irish wolfhound, Angus O’Ruff, and Tallulah Falls. This is a fast, pleasant read with prose full of pop culture references and, of course, sharp needlework puns.”