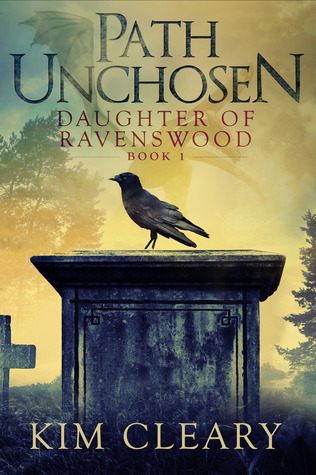 Path Unchosen by Kim Cleary is an Urban Fantasy novel that you’ll certainly like it.

The book describes a world where gothic atmosphere is at home. The beginning seems detached from a Dickensian novel, dark and sad, or Jane Eyre’s one with our heroine on the verge of being expelled from the orphanage that housed her. I liked the fact that the author has managed to create and maintain the impression of a 1800s world and several times I flinched at an element that suggested the modern world (but a post-apocalyptical one). The author had flair for choosing and creating this atmosphere because the outbreak survivors, whose causes and the aftermath are not yet disclosed entirely, turned not only material, but also mentally and spiritually to a dark age set. It is a world where all modern amenities are merely remnants and memories, and the real fears or superstitions are powerful and always present, and manipulated by those with special powers and nefarious purposes.

In this storm-beaten world Judy must find her place and origin, but that's not easy when her skills do not go unnoticed and frighten those who have found their only prop for survival in the religious fanaticism or attract the interest of some morally putrid characters.

The characters are varied, some well-defined and with well-established role in the story, other transient, whose meaning and implication I hope to come in the next volumes. I loved Jody. Her naturalness, goodness and innocence get her into trouble, but also to fall in love and form a good romance triangle. The feelings discovery and their bewilderment occur naturally and are easy to understand, offering new savor to Judy's personality. If in terms of choices between good and evil she is doing well, it seems that in the heart issues she will have some hard times. The men involved are both valuable and delicious and they both try to protect (and conquer) her, till to their sacrifice, from those who want to use or to kill her.

Path Unchosen is rich in Urban Fantasy creatures. The author has the courage to put together: ghosts and spirits, zombies and raised deads, gargoyles and demons and to change for some of them their classic pattern, turning them into weapons and means for necromancers and wizards with thirst for absolute power, but also in trustful friends or casualties.

The action starts from the first pages, always something is happening, someone (or something) is involved or becomes victim. Although some elements seem to appear too at the right time without enough explanation, the suspense is maintained and remains plenty of room for surprises. With a fierce mind, Judy discovers a lot very quickly, but this does not hurt the pace nor bored the reader because there are still many to be clear and many gaps to fill.

In conclusion, I liked this book and with the hints sprinkled and the doors open by the author, the series promises to come increasingly interesting.

Book Description:
When eighteen-year-old Judy Hudson discovers she’s a necromancer and sees first-hand the pain her powers can cause the dead, she just wants to deny who she is. The zombie plague is long over. She wants to find a more normal life, but that’s a challenge when a beautiful otherworldly man, who claims to be her guardian, saves her life.

Judy tries to set right the harm she inflicted on a spirit she raised, but new zombies attack—zombies raised from among the long-time dead. Someone else just like her is out there, and he’s not trying to set anything right. To save her own life, and protect the innocent inhabitants of the nearby town who’ve become her friends, Judy has to figure out who’s raising the dead and why. She must also learn to control the darkness inside her—a seductive darkness that promises her power beyond her wildest dreams.

Kim writes urban fantasy for anyone who longs to discover they are extraordinary. She writes about hopefulness and determination, and about heroes who push through extraordinary situations and obstacles, one step at a time. Magical friends and gorgeous guys help, or hinder, in one adventure after another.

When not writing, revising, or thinking about writing, Kim gardens, plays with her dog, chats on social media, catches up with friends or cooks an Indian feast. She is a member of Writers Victoria, Romance Writers of Australia, The Alliance of Independent Authors, and a certified chocoholic.

Kim grew up in Birmingham, UK, studied medieval history and psychology at Adelaide University in South Australia and has worked all over Australia and in London. She now lives with her husband and an adorable Cocker Spaniel in Melbourne, Australia.

Author's Giveaway
a Rafflecopter giveaway
Posted by CCAM at 6:28 PM

Great review, Cremona! I love the mix of paranormal creatures in this one that can often work well. It sounds like an action-packed novel I would really enjoy! :)

Love the sound of this thank you