Giveaway Out of Turn (Kathleen Turner #4) by Tiffany Snow 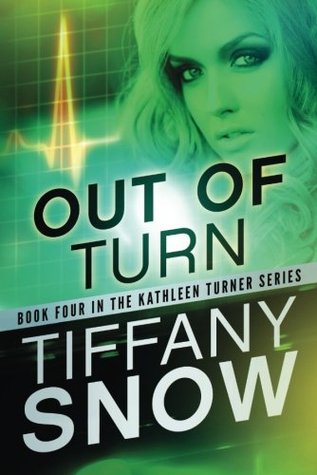 Breaking up is hard to do, as Kathleen Turner discovers. After a falling-out with her ex, high-powered attorney Blane Kirk, she’s moving on the best she can. Unfortunately, someone from her past is set on revenge and nothing short of killing Kathleen will stop them.

Keeping his brother’s ex-girlfriend alive isn’t something new to assassin-for-hire Kade Dennon, but this time can he protect her from himself? She’s a woman he can’t convince himself to walk away from, no matter what it costs him.

Regret is a constant companion for Blane as he realizes the truth behind the lies he’s been told. Can love heal the past, or can some mistakes not be undone?

Murder reunites Blane, Kade, and Kathleen as the police put Blane in their crosshairs. Blane may lose everything unless he and Kade can find the real murderer before it’s too late. But if they can’t set aside their love for the same woman and work together, it will tear them apart.

In Out of Turn, Kathleen is caught between two warring brothers, and the consequences may be fatal.

"I LOVED IT!!! HELLS YA! I LOVED IT!
I haven't read a lot of RS, and the ones I have read have been good to very good. But this...This was KAPOW! good! Excellent, kept me on my seat, good! Scrambling for any free minute to read, good! Why, oh why did it take me so long to read this??" - Didi (Goodreads)

"This book was f**** awesome!I haven't even posted one single update from it because I was just so hooked on it.SOOOO happy I stumbled upon it,because I can't remember when I so excited for a series." - Laura (Goodreads)

My debut novel, NO TURNING BACK, is the first book in The Kathleen Turner Series. I write about things I love to read myself - a heroine who could be a neighbor or best friend; two men who each portray their own version of darkness and light, each vying for her affection; and a story that focuses as much on the characters as it does the suspense. NO TURNING BACK, TURN TO ME, TURNING POINT and OUT OF TURN currently comprise The Kathleen Turner Series. The fifth and final book, POINT OF NO RETURN, will be released in May, 2014. A companion novel, TURN ON A DIME – BLANE’S TURN, is also available.

As for me, I've been reading romance novels since I was way too young to read such things, have an unhealthy obsession for all things Doctor Who, prefer Pepsi to Coke and Absolut to both, think men who drink girly cocktails are wusses, have learned to never stop believing in my beloved St. Louis Cardinals, and can recite the entire scripts of When Harry Met Sally and Apollo 13. George Washington is cool, Bon Jovi still rocks the house, and Bruce Willis is the ultimate alpha-male hero. Most of all, romance never, ever gets old.

I heard great things about this series everyone's favourite heroine, on my TBR pile

Ah, Tiffany, I really like your writing! Thanks and keep it up! jdh2690@gmail.com

Look forward to reading your books and thank you for the opportunity.