Special Giveaway After Dark: The Darkest Angel/Shadow Hunter (Lords of the Underworld #4.5) 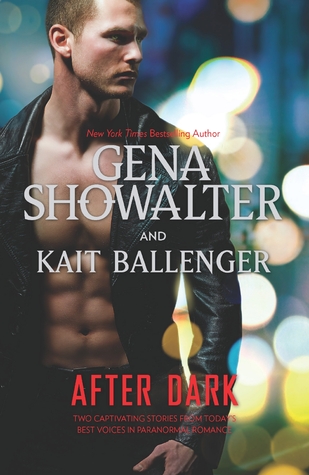 The AFTER DARK Anthology featuring Gena Showalter's The Darkest Angel and Kait Ballenger's Shadow Hunter is being released in mass market paperback on December 31 and to celebrate we are giving away lots of goodies.

A timeless seduction A unique temptation And a whole world of dark desires...

The Darkest Angel
Winged warrior Lysander has been alive for centuries, and yet he's never known desire-until he meets Bianka. Spawned from the bloodline of his enemy, the beautiful but deadly Harpy is determined to lead the untouched Lysander into temptation. He may try to evade her attempts, but even the most iron-willed demon assassin can resist for only so long....

And from debut author Kait Ballenger:

Shadow Hunter
Vampire hunter Damon Brock's first assignment with the Execution Underground is Rochester, New York, a city crawling with the undead. But he isn't the only hunter in town gunning for vamp blood. Tiffany Solow is fierce and ruthless when it comes to slaying the monsters that destroyed her family-and she works solo. But being alone is no longer so desirable when she meets the mysterious hunter who wants more than just her turf. As they work to massacre the local covens, the line between good and evil blurs when they are forced to decide between their lifelong beliefs... and their newfound hearts. 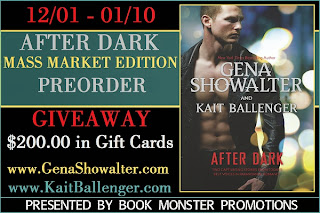 
Gena Showalter is the New York Times and USA Today bestselling author of over thirty books in paranormal and contemporary romances, as well as young adult novels. Her series include White Rabbit Chronicles, Angels of the Dark, Otherworld Assassins, Lords of the Underworld, Alien Huntress and Intertwined.

Her novels have appeared in Cosmopolitan Magazine, and Seventeen Magazine, and have been translated all over the world. The critics have called her books "sizzling page-turners" and "utterly spellbinding stories", while Showalter herself has been called “a star on the rise”.

Kait Ballenger is a full-time paranormal romance author, wife, professional bellydancer, and graduate student living in Central Florida. SHADOW HUNTER, the debut prequel of her sexy paranormal romance series, the Execution Underground, about an international network of supernatural hunters who fight to protect humanity alongside the powerful women they seduce, releases in an anthology titled AFTER DARK along with NYT Bestselling author Gena Showalter's novella THE DARKEST ANGEL in July 2013. TWILIGHT HUNTER, book one of the EU series, debuts Sept 2013.

With a B.A in English from Stetson University, Kait is currently a student in Spalding University’s M.F.A in Writing for Children and Young Adults program, where she studies dual-genre in screenwriting. She writes dark paranormal romance with drool-worthy heroes and kickass heroines as Kait Ballenger, and sassy YA urban fantasy under her maiden name, Kaitlyn Schulz.

When Kait’s not preoccupied with paranormal creepy-crawlies, she can be found slaving over endless amounts of schoolwork or with her nose buried in a book. She lives in Florida with her husband, and doggie-daughter, Sookie (yes, like the heroine in Charlainne Harris’ books), and two mischievous kittens, Elliot and Olivia (yes, like the Law and Order characters), near the love and care of her supportive family. Kait believes anything is possible with hard work and dedication. One day, she will be a bestseller and have people name their pets after her characters too.

PLEASE BE SURE TO READ ENTRY RULES COMPLETELY!

In order to enter, you must email a picture, screen shot or attach a copy of your receipt from your purchase of either the MASS MARKET PAPERBACK or MASS MARKET EBOOK version of After Dark.

PLEASE NOTE: It MUST be the MASS MARKET format to be eligible for the giveaway.

Email your receipts to kaitballengergiveaway@gmail.com

FIRST 10 ENTRANTS:
will receive a giant SWAG pack that contains a signed bookplate plus bookmarks from Gena along with SWAG from 50+ authors, courtesy of Book Monster Promotions.

FIRST 50 ENTRANTS:
will receive a goodie bag from Kait that includes bookmarks, magnets, pens and other goodies.

FIRST 500 ENTRANTS:
will receive the first chapter of Immortal Hunter, Book #2 in Kait's Execution Underground series for an exclusive peek.

You have until 1/10/14 to purchase your Mass Market edition and submit your receipt. Winners will be announced by 1/15/14 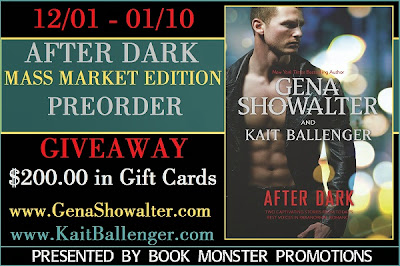