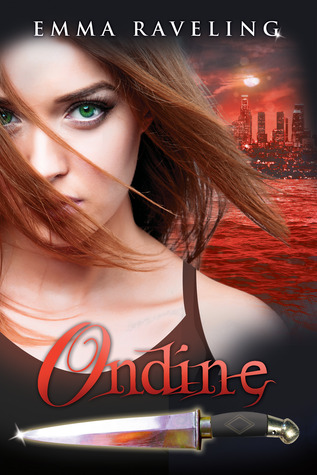 “I shouldn’t get involved.”

Rebellious and headstrong, sixteen-year-old Kendra Irisavie doesn’t have much respect for authority. An ondine with the powerful gift of Virtue, she uses her tough attitude and Empath magic to navigate through high school and keep others away.

Because being an ondine also means keeping secrets.

Kendra and her mother are Rogue water elementals in the middle of an ancient war. They hide among humans, their survival constantly threatened by monstrous Aquidae demons.

Along with a rigorous training regimen to mold Kendra into a lethal fighter, her mother has instituted four rules to keep her safe.

Trust no one. Relationships are weaknesses. Emotional attachments are dangerous. Be responsible only for yourself.

But when Kendra witnesses a classmate in trouble, she intervenes and her decision to break the rules comes at a price.

Sometimes, humans could be more dangerous than demons.

He tensed. “What are you saying?”

“I’m saying I want in.” I settled on the corner of the desk and levelly met his look of disbelief. “I want you to take me to his place so —“

Rui stood and walked back to the car.

“I don’t care what you think you can do.” He whipped around to face me, his expression hard. “You don’t know jack shit about my —“

In one fluid movement, he swept me off the desk and shoved me against the wall. Two hundred pounds of muscle locked me into place and confirmed Troy’s story.

An icy shiver shot down my spine. If we were thrown into a ring together, he really might give me a run for my money.

Muscled forearm pressed against my neck, effectively pinning me in place.

The smart thing to do was walk away and let him, his father, and Troy sort out this mess. Sure, Troy would get the short end of the stick, but that wasn’t my problem.

Except my conscience wouldn’t stop prickling. I couldn’t let it go.

Maybe because Troy reminded me of past regrets and this was an opportunity to change the outcome. Maybe because the white-hot anger in Rui was a festering wound that felt all too familiar.

Hell, maybe I just really wanted to prove to my mother I could do this.

I could stop one human male.

Rui’s voice dropped to a whisper. “You don’t know shit.”

Cold eyes bored into me, hard and demanding. Magic bubbled through my veins. Beneath the anger, Empath sensed determination and worry. It was almost as if he was willing me to understand…

My gaze flickered up. Harsh light illuminated the ugly industrial walls of the garage, bouncing off metal and steel. Something winked in the corner.

I blinked once. Slowly.

Rui studied me for a moment longer before the grinding pressure against my windpipe eased. I coughed, lungs desperately sucking in air.

Without another word, he exited the garage and I followed. Flickering yellow streetlights cast sickly triangular patches across the asphalt. Night air closed in, thick and humid.

The relentless drone of the Route 60 overpass grew louder and more insistent as we neared the main street.

The club was only a few blocks away. “Yeah.”

“You like working the floor.” I felt the weight of his glance through the shadowy gloom. “But you don’t buy.”

I shrugged. “Needing something makes you weak.”

“Sometimes what we need is good for us. Sometimes it’s not. But we all got something we’re addicted to, girl.” He laughed, a harsh rumble of bitter amusement. “You’re just addicted to physical release.”

The scrutiny made me uncomfortable. “So what’s your addiction?”

“Belief.” He pulled out a pack of cigarettes. “You working with the cops?”

Empath swept through him, attempting to make sense of the puzzle that was Rui Vergara. He wasn’t lying or concealing who he was. The pain was there, hot and unstable. A thread of something wistful, too. Sadness? Maybe regret.

But there was also ruthlessness and a barely controlled fury that came from being kicked down one too many times.

Who was it directed toward? His father? Troy? And how quickly could it shift to me?

The lighter’s flare briefly highlighted the solemnity etched into his skin. He seemed far older than his age.

“No, you’re not a rat.” He took a long drag and tilted his head. Wariness heightened at the shrewd look in his eyes. “Just another person who has something to hide.”

I’m a fantasy writer who lives a slightly eccentric life with my accommodating husband and our charming, neurotic dog. I'm currently working on the Ondine Quartet, a young adult urban fantasy/paranormal series featuring a kick-ass heroine, powerful magic, and the complex world of water elementals.

I have a weird love of spreadsheets and organizational tools because they give me the illusion that I am somehow in control of the chaos that is my life. I adore beautiful art such as painting and sculpture, classical music, lyrical writing, and great graphic design. My all-time favorite books (as of this writing) are Immortality by Milan Kundera, 100 Years of Solitude by Gabriel Garcia Marquez, Beloved by Toni Morrison, The Great Gatsby by F. Scott Fitzgerald, and The Metamorphosis by Franz Kafka.