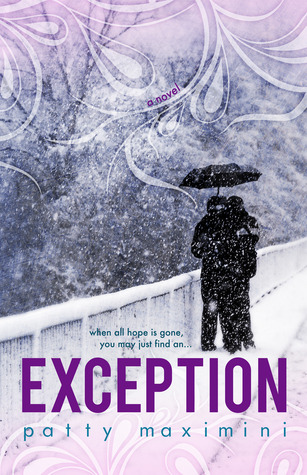 When all hope for moving on from a life filled with pain and abuse was gone, Emily Watson closed herself off to the world, packed her bags, and moved across the country in search of a new life. What she found was a career she adored and friends she loved. It wasn’t a full and complete life, but it was definitely better than what she knew before.

When all hope for being loved and accepted for who he was instead of what he had was gone, Taylor Carter decided that trusting people outside of his family wasn’t really smart and would only lead to disappointment. With his world turned upside down, his life became about his work, and every new relationship was meaningless and superficial. He was safe and definitely content but never truly happy.

When all hope for staying awake during a long day was gone, Emily and Taylor found themselves at the same coffee cart. Little did they know then that the worst coffee they’d ever had would forever change their lives.

When hopeless people are blinded by an endless pain, when contentment and safety feel like the best options, and when love seems impossible, they may just find an exception.

As a writer, the best feeling in the world is reading a note from a reader, whether it be a personal message or a review, and seeing that they fell in love with your story and characters. It’s like eating ice-cream at Disney World, because every word of every story has a part of the writer’s heart, dreams and life in it, and knowing that they touched someone else is just wonderful. But, people don’t all have the same tastes and just like I haven’t loved every book I’ve ever read, I’ve always known that my book would not please everyone and therefore, negative reviews would come.

As much as I’d like to say that being prepared prevented me from being upset, but that’s just not true. Negative reviews are hard whether you’re prepared for them or not. However, one thing I’ve learned through this process is that they are also opportunities to learn what works and what doesn’t in my writing style, and ultimately, improve myself.

That’s how I deal with negative reviews. I choose to look at them with unemotional eyes and take the good from those words. So, in a way, whenever someone has something not so nice to say about my book, I thank them, because they are making me better for my next books.

Emily looked in his eyes and felt blood rush to her face once again. How could she tell him what had happened without making things weird? Telling him would ruin everything. She offered her most honest smile before speaking. “It’s nothing Tay, really. Just let it go. Please.”
At her words, he let go of her hand and stepped back. For the first time since they’d met, she was keeping something from him. For the first time, something serious enough to take her two best friends out of their beds had happened, yet she refused to tell him what. For the first time, she didn’t trust him enough to be open and honest, and he had no idea why.
The pain he felt was indescribable and it showed in his eyes. He cleared his throat before speaking again. “It is something. Something you chose to share with them and not with me.” He shook his head, slowly. “I thought our friendship was special. I thought I was special, Emily. I thought you and I kept no secrets.” Holding her gaze, he was silent and took a long breath. A small, sad smile tugged at his lips before he spoke again. “Guess I was wrong.”
Tears pooled in Emily’s eyes and she took a step towards him, but for the first time, he didn’t welcome the closeness between them and, lifting his hands, took a step back. She opened her mouth to speak, to try to explain what had happened, or at least to ask him to wait a little until she could tell him, but he shook his head and walked away before she ever had the chance.
She followed him with her eyes until his back passed through the door, and he slammed it closed behind him. Tears ran from her eyes to her cheeks, and she barely felt the set of hands that held her shoulders. For the first time in years she couldn’t care less if someone touched her. Nothing in the world could crush her any further.
When her eyes finally focused she saw her two best friends standing next to her. Zack wiped the tears from her face with the same loving and understanding expression he always had, while Jody muttered curses behind him.

Fisting his hand in the fabric, he tugged it down hard, and this time Emily didn’t object. She didn’t think she could. He was staring so deeply into her eyes, she thought he could see her soul. “This is mine Emily, you understand me? It’s all mine.”
Before she could answer, he moved and pulled her down so she was flat on her back, her entire body exposed and her hair tossed around the bed in a silky black fan. Fucking hell, she’s sexy, he thought.
“I’m done fighting now,” her raspy admission was followed by clawed hands, snaking through his midsection and pulling him down. “I’m yours, Tay, every tiny, little bit of me.”
Taylor was hardly ever speechless, but that was how he felt hearing her words and knowing, deep down that it was his cue. Working through the unfamiliar knot in his throat and the uncomfortable feeling of butterflies flying in his gut, he lightly kissed her lips, trying to even his breath out and fighting the stinging in his eyes.
“Well babe, that’s good, because I want to claim all of those tiny bits as mine.” The wicked smile that spread on her perfect, lush lips, made him snicker. “Not only in that way, perv,” he teased, allowing their friendly banter to shine once more.
Smoothing her hair down, he looked her deep in the eyes, connecting with her in a most intimate manner and spoke in his most serious and honest tone. “I want to spend my whole life loving every bit of you, in every sense of the word, through whatever life throws our way. I want to make every piece of you a piece of me, and give you all the titles I offered when I asked you to be my girlfriend. As much as I love sharing my life with you as my best friend, girlfriend and life partner, I want to make you more than that, and I can’t wait any longer, Ems. I love you too much.”

Words have always been a passion of mine. I’ve always loved to read them, write them and learn them in other languages. Last year, I’ve decided to take that passion and turn it into a book, the result was Exception, my very first novel due this October.

Whenever I’m not sitting behind my computer, I’m either enjoying the company of my dear hubby, Alex, and our four four-legged babies or reading. I’m a firm believer in long hand written letters, love of any kind and good stories.

Author's Giveaway
a Rafflecopter giveaway
Posted by CCAM at 9:30 AM

Thanks for giveaway! :D

Beautiful sad cover you have there!
Thanks for the giveaway ;p

I like these stories where the two characters are hurt and refuse to be hurt again but end up discover each to find their happiness.

Wish to read the Exception.

totally loving the cover, goes perfect for this book

Thank you for the giveaway.

Wow, the excerpt left me speechless, i'm ready to find out how this book goes.

I loved the excerpt, hope Emily and Taylor end up happy.

Oh man, i want to find out of Tay and Emily have their HEA. I'm totally reading this.