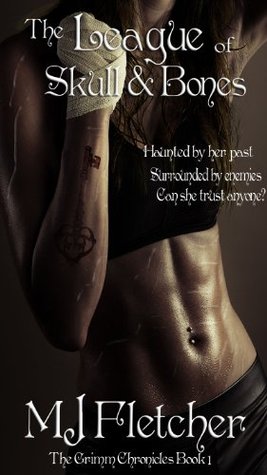 Jess Grimm has the ability to travel to any dimension in the multiverse. There’s only one problem… it’s killing her.
Jess is in a race against time to find a device that can slow the progression of the power inside her, but she isn’t alone. Others want her power, and they don’t care how they get it, or if she is dead or alive when they do.
The only person willing to help her is the mysterious Ronan Sparrow a member of the League of Skull & Bones, one of the very groups that want her power. But what does Ronan want in return? Can Jess trust him or will she find herself alone with enemies on all sides?

I wasn’t alone in the dark.

Snarls and growls surrounded me, running my blood cold. I moved my head from side to side, scrunching my eyes, trying desperately to catch sight of the beasts before they reached me. My crimson swords weighed so heavily in my hands that I felt as if I’d been fighting for what seemed like eternity.

Claws and fangs suddenly slashed out from the darkness and I did my best to defend myself, though in my heart I knew it was a losing battle. The beasts were overpowering me and soon I wouldn’t be able to stop them. No one was coming to save me. I was alone.

Talons slashed across my back and warm blood trickled down as pain shot across my spine. I stumbled and the beasts—I was sure—tasted victory. They moved in at me in waves. I spun my blades trying to battle the never-ending tide, trying to survive.

It was hopeless. For every monster I took down, another two took its place. I wanted to live, I wanted to fight, but the agonizing pain of my flesh being torn and sliced was too great to bear. I couldn’t go on. The jaws of one of the beasts clamped on my wrist, and I lost my grip on one of my swords. It fell from my hand and clattered to the ground and with it went my last vestige of hope.

Blood drained from my body and my vision faded. I would soon black out, and then the beasts would feast on me. A scream bubbled in my throat and my mouth fell open, but no sounds came out. I closed my eyes, not wanting to see my own death and hoped that darkness would take me before the beasts did.

I bolted out of bed, my mouth still open in a silent scream, and my sheets tangled around me soaked with sweat. I stood at the foot of my bed, my breathing coming in ragged gasps.

The nightmares came almost every night. I couldn’t escape them no matter how hard I tried. I yanked at the sheets, dragging them off me and tossing them back onto the bed.

I’d worn only an old t-shirt to bed, though now I wished I had worn more. I didn’t want to see my scars, didn’t want to be reminded yet again, but I couldn’t stop my fingers from tracing over the ugly scars that marked my arms and upper torso.

I walked from the top floor of my loft, down the stainless steel steps to the kitchen area. I yanked open the fridge and grabbed the container of milk and took a gulp. I placed it back in the fridge and slammed the door closed. I slipped down onto the couch that faced the large windows dotting the walls of my loft and sighed at the breathtaking view of Paris. It always calmed me.

My fingers mindlessly drifted over the scars on my arms. They were a reminder of the very real night I had been trapped in a nearly unwinnable fight. Monsters had surrounded me and had almost killed me. If it hadn’t been for my friends, I would have died.

But I hadn’t died, or had I? I was far from the girl I had once been. Once I was the prettiest girl in school, and the girl who had hit every club and had had a blast when she had moved to Paris. But after the vicious attack everything had changed, most of all me.

My fingers suddenly stopped, settling on the edges of identical tattoos on both my forearms. I glanced down at the image of a Skeleton Key. My scars refused to cross paths with the tattoos, as if they knew that they dared not go near them.

I slid my finger over the tattoo, and felt a buzz of power run through me. These unwanted tattoos were another reminder of something else entirely. But unlike my scar, I had chosen these.

The monsters may not have gotten me, but these tattoos were a different matter. They marked me for death.

I pulled my knees up into my chest and took a deep breath. Maybe I would wait here until dawn. Then I wouldn’t have to worry about any more nightmares or death that constantly stalked me.

I sat alone in the dark looking out on the City of Lights, awaiting the dawn and praying that I could keep death at bay and that I wouldn’t hear the sound of monsters.

MJ Fletcher was born in New Jersey and now lives by the beach with his beautiful wife and daughter. He has been writing since he first stapled pages together as a child and called them a book. He finally realized his ambitions when his comic book series Adam Zero The Last Man of Earth was published by Ronin Studios. His other comic book work includes Digital Webbing Presents and The Hero Initiative. His first novel The Doorknob Society released in 2012 was nominated for a Cybil award in the young adult category. He has continued writing the Doorknob Society Saga his rollicking steampunk adventure series as well as working on numerous other writing projects.