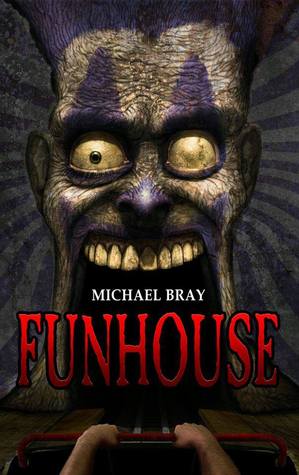 Roll up to the funhouse, a brand new collection of tales from the author of Whisper, Dark Corners & Meat, Michael Bray.

A man who makes an unscheduled stop gets more than he bargained for in ‘CANDYLAND.’

A Group of teens discover a terrible secret on Samsonite farm in ‘SCARECROWS.’

A Schoolyard bully and his former victim reunite with horrifying results in ‘LONG TALL COFFIN.’

A High school party becomes an arachnid nightmare for one unfortunate guest in ‘THE BOY WHO SAW SPIDERS.’

These are just some of the horrors hidden within the darkest recesses of the funhouse. Look closer if you dare, and indulge in these 16 tales of madness, murder, terror and insanity.

GUEST POST
The long & The Short Of It
by Michael Bray
Although it may not seem so on the surface, there is a definite difference between approaching writing long fiction, such as novels etc., and shorter stories like the ones that appear in Funhouse. Both need to be approached in a different way, and I advise any author to get into the habit of practising both writing styles regularly.

For novel length works, you have to take into account a lot of things. The pacing of the plot needs to unravel at a slower pace, often you will also need to include several self-contained sub-plots to keep the reader engaged. Characters need to slowly develop, gradually revealing more and more about themselves as the story goes on. For an author used to writing shorter works, this can prove a challenge, and authors will often worry that their works will fall in that limbo where it is too long to be a short story, but not long enough to be a novel. There is nothing wrong with this of course, and I have published a story like this called MEAT. The story was initially intended as a short story for my debut collection, Dark Corners, but as it progressed, and this cast of characters started to develop, I quickly realised that this was going to be a standalone. The 5,000 word short story that I had envisioned, ended up being a near on 50,000 word story. I was really happy with how it turned out, and consider it one of my favourite stories.

The flip side of the coin, is that those who write exclusively long fiction might struggle to be able to write short enough works for submissions for anthologies and such. As with writing novels, there are certain guidelines to follow which should help to trim those big story ideas to smaller, bite sized chunks.

First of these is to get straight into the story. The beauty of the short is that the reader wants to know what is going on right away. Dive straight in at the crux of the story. Pull the reader in from the first page. As for cast of characters, keep them minimal. Just the important players with minimal distractions. Forget sub-plots and dragging out the story. Give us the goods without delay. If you do find that you have gone a little bit longer than intended, edit mercilessly. Look at every single line in the story and ask yourself what it contributes to the flow of the story. If it doesn’t tell you the information that you need to get to the resolution, then get rid of it.

Writing both types of story is a really good discipline for authors to practice. There are good lessons to be learned from regularly doing both, and it will really help to develop your skills.

I hope this has been of some interest, and given some insight into the differences between both styles of writing.

About the author:
Michael Bray is a Horror author based in Leeds, England. Influenced from an early age by the suspense horror of authors such as Stephen King, and the trashy pulp TV shows like Tales From The Crypt & The Twilight Zone, he started to work on his own fiction, and spent many years developing his style. In May 2012, he signed a deal with the highly reputable Dark Hall Press to print and distribute his collection of interlinked short stories titled Dark Corners, which was released in September 2012. His second release was a Novella titled MEAT which was initially self-published before being picked up by J. Ellington Ashton Press. His first full length novel, a supernatural horror titled Whisper was initially self-published, and following great critical acclaim, sold to Horrific Tales publishing where it went on to reach as high as #3 in the amazon paid best sellers list.

The cover drew me in and made me read more. Looks like a very intriguing book.

I like the snippet on the banner better ;p

I don't know why, but the cover doesn't scare me! :)) It's really funny. And also, has the color purple which is my favorite color. It's really cute.

Ha-ha, I agree with Daniela Ella, the cover is pretty funny :-). A horror story would be timely.

I like the covers! I love horror stories, zombies are my favorite but anything scary works for me!

Would like to have a great adventure reading this book.
Thanks for the chance!