Will courage, love and honor be enough? Branded Trilogy by Kat Flannery

"All in all, Lakota Honor is definitely a book I would recommend to anyone that loves a good historical romance. It has just the right amount of mystery, adventure, and romance that makes for a highly entertaining read.I give it a two thumbs up!" - Kristy, Goodreads 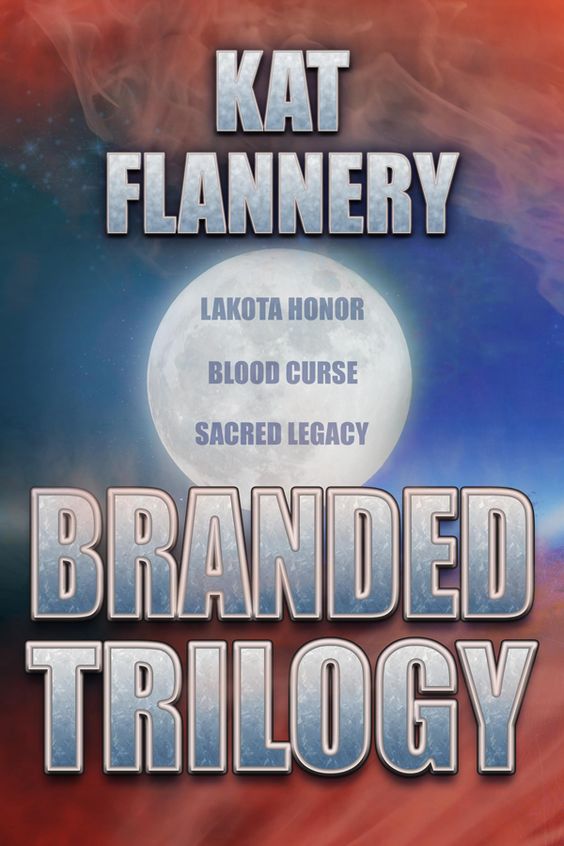 Will courage, love and honor be enough?

LAKOTA HONOR (book 1): In the small town of Willow Creek, Colorado, Nora Rushton spends most of her days locked up in her home with a father who resents her and fighting off unwanted marriage proposals from the wealthy Elwood Calhoun. Marked as a witch, Nora must hide her healing powers from those who wish to destroy all the witkowin—crazy women. What she doesn't know is that a bounty hunter is hot on her trail.

Lakota native Otakatay has an obligation to fulfill. He has been hired to kill the witkowin. In a time when race and difference are a threat and innocence holds no ground, courage, love and honor will bring Nora and Otakatay together as they fight for their freedom. Will the desire to fulfill his promise drive Otakatay to kill Nora? Or will the kindness he sees in her blue eyes push him to be the man he once was?

BLOOD CURSE (book 2): Four years after the Blood Curse, Pril of the Peddlers vows to protect her child against the evil men who hunt her. With her clan unaware of the branded girl among them, Pril has to keep the identity of her daughter a secret. When her child is kidnapped, she is forced to ask Merchant runner, Kade Walker, for his help.

Kade Walker needs to find the gypsy child. Blackmailed and pushed beyond his own moral code, he is determined to do whatever it takes. When he comes across the Peddler clan, he is sure the girl is there, however all hope is lost when the gypsies capture him. Time is running out—until Pril makes him an offer he cannot refuse.

Amidst greed, lust, revenge and love, Pril will need to trust Kade. But as the evil nears and doubt creeps in, will she discover that the enemy has been standing next to her all along?

SACRED LEGACY (book 3): Desperate to escape the memories that haunt her, Tsura Harris returns to Jamestown, the very place her mother forbade her to go. A gifted Chuvani, Tsura has sworn off all magick, thus making her vulnerable to the Renoldi clan, who wish to kill her and take the pendant that is the key to her power.

Red Wolf is hell-bent on living his life on the sea, until he runs into Tsura on the docks. His pride wounded from her rejection years before, he hoped to never see her again. But when the evil Corsair, Romulus Black, demands to know where she is, Red Wolf must protect her, as is his duty.

But is duty and honor his only reason, or does Red Wolf still carry a flame of love in his heart? And will Tsura finally discover her destiny?

About the author:
Kat Flannery’s love of history shows in her novels. She is an avid reader of historical, suspense, paranormal, and romance. She has her Certificate in Freelance and Business Writing.

A member of many writing groups, Kat enjoys promoting other authors on her blog. Kat loves to teach writing classes and give back to other aspiring authors. She volunteers her time at the local library facilitating their writing group. She’s been published in numerous periodicals throughout her career

SPECIAL PROMOTION
With every pre-order of the Branded Trilogy:
- You will receive 3 novellas, courtesy of Imajin Books.
- Your name will be entered into a draw for a ruby necklace (similar to the one in Blood Curse and Sacred Legacy) and author swag. Drawing of the winner will be on Oct 1.
Email your proof of purchase from Amazon to kflannerybooks@gmail.com.

Thank you so much for posting the BRANDED TRILOGY! :)