The Amy Binegar-Kimmes-Lyle Book of Failures: A funny memoir of missteps, inadequacies, and faux pas
"This book is a blast!" - Donna, Goodreads 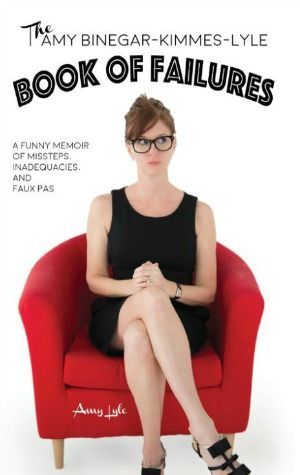 THE AMY BINEGAR-KIMMES-LYLE BOOK OF FAILURES is a humor memoir. If you have ever failed at love, finances, been fired, not fit in, self-diagnosed yourself with disorders and conditions and/or said, "I really need to get my s*** together," this is the book for you.

You may appreciate your own dysfunction a little more as you take a journey through Amy’s debacles including: “I Was Not Talking to You,” where Amy mistakes a handsome man waving at her as a potential suitor but in reality, he was only trying to inform her that her belt was dragging on the freeway and “In the Neighborhood,” where members of a cult moving in concurred with a suspicious decline in the cat population. You will relish the chapters entitled “Calls from Sharon,” where Amy’s best friend rants about her kids not getting a fair shot because public schools are ‘so political,’ as her OB/GYN reported her vagina was ‘too clean’ and how the most eligible bachelor from 1982 married a whore. Enjoy “I’m Going to Kill You,” where Amy compares her lack of sleep from her husband’s snoring to CIA agents extracting secrets from a POW. Feel 20-32% better about your own life after reading “Getting Divorced Sucks,” where 911 was called after Amy had an adverse reaction from taking Xanax.

Amy Lyle is comedienne, playwright for a large non-profit and monthly contributor for My Forsyth Magazine.

Ten percent of book proceeds are donated to The Place of Forsyth County, a non-profit helping people to become self-sufficient.

My funny memoir is about failures. It’s about learning the hard way to let go when someone no longer loves you, understanding that even the best of intentions may cause you suffering and how by mid-life you realize family and friends are more important than stuff.

A lot of people like the book, it meanders in the top ten of ebooks on Amazon, canoodling next to some of my idols, including Trevor Noah and Samantha Irby. I’ve been lucky to be featured on Atlanta morning shows a number of times, had good reviews in magazines and am picking up speaking engagements for women’s groups. So I wasn’t ready for the proverbial smack in the face from a reader.

It was a Thursday and I was still high from having an amazing book launch that over three hundred women attended to support the project. In the midst of hundreds congratulatory social media posts about the book, the party and my team, an email arrived on my fan site from “M.” “M’s” tirades of why she detested each chapter was longer than my actual chapters. Her last line was that she wished me dead.

Every artist hopes to evoke a feeling in the audience that is listening, watching or reading what they have created. There isn’t a wrong or a right to the feelings, it’s completely subjective. The passionate arguments about a book, a film, a song are what makes the world interesting, except when the shade is being thrown … at me.

My goal, to lighten the load of the women in the world: that just because our children are under-average and our weight is over, we can see the humor in our circumstances. The book had the opposite effect on “M”. She didn’t share with me any of her back ground but I knew she felt that my struggles were not as hard as hers and … she was probably right. Paying my bills and the health of my children are two of the many things I take for granted.

I wrote fifty replies to “M” before finally hitting send. I provided long explanations about how my suburbia failures may not compare to spending time in drug rehab or being incarcerated, but my intentions were honorable: regardless of your failures, don’t take yourself too seriously, learn from your disasters, and share your wisdom with others. I was sitting in the living room contemplating my response while my four kids incessantly flipped through the television channels. Arguments ensued, as no one like the same program. I gave them the advice my mother gave to my sister and I thousands of times growing up: “GO OUTSIDE AND PLAY!” As the tv went silent and the door slammed I had … an epiphany.

I didn’t need to explain myself to “M,” she was a grown woman and can choose what she likes and doesn’t like, just like my kids arguing over the merits of reality television vs. a classic movie. I deleted my most recent lines which were pretty much expletives strung together and wrote:

Dear “M”
Thank you for reading my book and taking the time to write to me. I’m sorry you didn’t enjoy it. To each his own.

About the author:
Amy Lyle is an author, comedienne, actor and screenwriter who works as a playwright for a large nonprofit in Alpharetta, Ga. Obsessed with fellow female comedians, Amy developed a writing style that is self-deprecating, hilarious and slightly neurotic.

Although she describes her book, The Amy Binegar-Kimmes-Lyle Book of Failures, as a “how not to” book, her message of “You are not a failure, you’re just having a little bit of trouble right now” is prompting people to share how the book made them feel (#bookoffailures), including the relief of knowing they are not alone in the world of missteps. Fan posts of people reading the book have been popping up from all over the world, including Lake Como, Italy, Amsterdam and The Great Wall of China.

The funny memoir, dealing with everything from getting fired to trying to blend a family, has been described as relatable and authentic, while sparking conversations about how we all handle failure.

The author has been featured in the Atlanta Journal-Constitution, Points North magazine and the WXIA-TV morning show, "Atlanta & Company,” in addition to writing a monthly column for My Forsyth magazine. 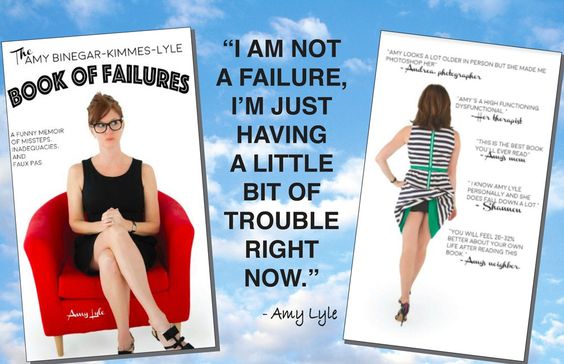