against the new odious powers that have risen - Merlin's Rogues: The Permesis Magician by B. Bentley Summers

18+ Merlin's Rogues, including Devon's crush, Cedric, are in hot pursuit and must battle evil dark forces that stand in between them and Devon. Even if they save the enslaved magician, Cedric will need to use his passion for Devon to break the atrocious Master-Slave spell 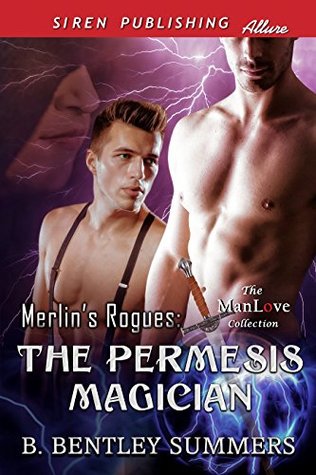 Pretty boy Devon has no idea his week of midterms at a Kansas university is about to go from arduous studying to meeting four magicians who call themselves Merlin's Rogues.

He's about to be even more surprised to discover that he's a magician, too, and sought out by dark forces--for what, however, he does not know. But he will soon discover why. Devon's sexbuddy kidnaps him and, using powers bestowed on him by evil forces, curses Devon into becoming his sex slave. Devon is taken to a mysterious suite in London where he gratefully does his master's bidding. Devon's exertions, though pleasing, are grueling, and it's clear this sexual coupling is feeding a dark entity, resurrecting something wicked.

Merlin's Rogues, including Devon's crush, Cedric, are in hot pursuit and must battle evil dark forces that stand in between them and Devon. Even if they save the enslaved magician, Cedric will need to use his passion for Devon to break the atrocious Master-Slave spell. Then, maybe they stand a chance against the new odious powers that have risen.

When did you write your first story and what was the inspiration for it?
I came home one day from graduate school when my mother showed me a book I wrote when I was 8 years old. She had found the book when was cleaning downstairs. It had pictures and a narrative on the bottom of each page. At least, I could see that I understood a beginning, middle and end.

My first novel I completed after that was Fresh Meat in 2013/14. A novel I will no doubt take down in July so I can fix it up, which will take God knows how long.

The story theme is a bit grim — it’s about the unspoken sex-slave trade that happens inside prisons. I chose a supernatural/ horror fiction narrative that follows a sociopathic warden who becomes obsessed with one of his wards.

My inspiration for the novel was a teenage sixteen-year-old boy I met when I was completing my master’s degree, who at that time, was incarcerated in an Indiana youth prison. I probably met him only three times, and we probably spoke barely two hours. But I never forgot him.

Do you have a writing schedule or do you just write when you can find the time?
When I worked at the Department of VA I l had lots of down time so I wrote a bunch. Since becoming a self-employed contractor though I can only write when I have time which isn’t much. If I want to get a bulk of work done then I need to take a writcation.

I, in fact, have two writcations planned this summer.

Briefly describe the writing process. Do you create an outline first? Do you seek out inspirational pictures, videos or music? Do you just let the words flow and then go back and try and make some sense out it?
An outline makes writing so, so, so much easier.

With an outline, I have direction even though I tend to stray from the path. But that’s okay as the outline starts ideas bouncing around.

But what often happens is I have one idea and I just start writing. It’s not words just flow out of me either. I pause a lot, write a scene then consider the direction I’m taking and take break. Words really flow in certain scenes, like action or a sex scene, but making fun dialogue takes time. Coming up with a scene that focuses on giving information is really tough, as I want to show rather than tell.

Somewhere after 20,000 words I think, “I should make an outline now. That’ll make things easier.” A piece of advice I am trying to stay true but don’t always follow.

One thing I have found extremely useful is writing and not stopping for long, even when I ask questions like… “What major rivers flow through New York City?”, or “Where did Germans immigrate to in 1920-1930?”, or “What is a good Romanian name?”, or “What are the different kind of curtains out there?”, or “This makes no sense. I just said this guy could fly and now he is stuck on an island. Why can’t he just fly away?”

In these moments, I use the comment box feature and leave the question I have. Later I go back and answer the surface level items like a person’s names, titles of movies made in the 1920s, or what is the largest building in the world, or historical timelines. I then move to character building and deepening the plot.

Where did the desire to write LGBTQIA+ stories come from?
The literature or films of the 1980s were not exactly kind to gays or lesbians. And no gay hero existed in the books.

When I was 10 or 11 years old, or 1985, I started to read Stephen King. No gay characters existed in those early books like Salem’s Lot, IT, Carrie, Christine, etc. But Stephen King’s imagination and character building had so much depth and uniqueness, and he could spin a great tale, I still learned a lot about people and myself. However, King, like any author of that era, was a victim of the times and gay themes did not come up. I did though always wonder whether Carrie was lesbian, even if that wasn’t King’s intent he could have done it an unconscious manner.

The first time I recall reading something that connected to my gay feelings was not the best thing for a youth to read. Gary Jennings wrote a book called, Aztecs, and in this story there’s young Aztec man who will come to witness Hernan Cortes’ colonization. In his travels he meets a younger male of about twelve or thirteen whom he saves but not before the boy is castrated. One night, in their travel across the desert, this boy gets into the sleeping bag with the main character in the nude and the rest becomes history.

In Stephen King’s The Stand there’s a character known as The Trashcan Man, who is a mentally ill guy and pyromaniac who has a flashback to his youth when he was imprisoned for burning his school down and being raped by his fellow bunkmate.

Silence of the Lambs has a character named Buffalo Bill who is a transvestite and clearly a psychopath as he collects skin from obese women. Maybe not the director or writer’s intent, but transphobia wafted from the film.

Any kind of positive gay character presented in a book would have been groundbreaking for me. It could have been someone questioning their sexual orientation, exploring it, or in a secret relationship. For a youth struggling with his own sexual orientation not to mention shame, with no support – a model presented in a book would have revolutionized my world.

So, when I started writing, I decided no matter if the main character was heterosexual, I would make it a point to always include as much diversity as I could including gay and transgender people.

About the author:
Bryce is a psychologist, author, and the founder of Queer Sense Theory.

Bryce's full time work is at the Veteran Affairs where he has been employed for five years. He has extensive history of working with people diagnosed with PTSD and he used these experiences when writing Fresh Meat.

The novel, Fresh Meat, recently won Dan Poynter's Global eBook Awards for best gay fiction. This piece is more than just a book, but embraces gay identity while deploring the hateful violence that happens in the U.S. prison system, and across the world. The book parallels the vicious Man-Punk prison system to the long ago abolished American Slavery System. However, Fresh Meat is not non-fiction, but fiction, and it's genre is best described as Supernatural Horror.

Rotville and The Zombie Squad, are two of Bryce's recent completions. The Zombie Squad is a teen Post-Apocalyptic Thriller that recently received Reader's Favorite 5-Stars. This novel has humor and is fast pace, that follows four teens in New Orleans who find themselves not only chased by psycho gangsters, but in the middle of zombocalypse. Rotville is a new adult/ adult Sci-Fi Post-Apocalyptic Horror that takes place in the near future, in a city called Rotville where people with a rot disease are quarantined. Inside this city is the mega prison Colleseo, where inhumane experiments are carried out on inmates. It's also the birthplace of Dylan, a super soldier who must fight his way out, save a couple of youths from the new deadly mutants, and keep from being re-caught by the greedy director.

Bryce is also the author of the fiction Young Adult Dark Fantasy/ Sci-Fi series AMEN TO ROT. The novel NYTE GOD is the conclusion to this series. The Amen to Rot series and Nyte God pit Ace and his friends against alien invaders who are turning humans into mutant creatures.

Bryce authors popular fiction with a style that entices readers of all backgrounds to consume, and makes every attempt to make his characters diverse.

As noted, Bryce does dabble in gay fiction, and pens it under B. Bentley Summers, though in truth, these works are meant for everyone to read. Bryce is the founder of Queer Sense, a theory that describes how people form attitudes. The theory provides insight into how specific components in cultural contexts shape our beliefs and values, which ultimately form our attitudes. The nonfiction book, QUEER SENSE: How Are Attitudes Formed? A Revolutionary Guide for Teens, Parents, Mental Health Professionals and Anyone Interested in Queer Theory, is due out by 2016.

Slavery, including sexual slavery, is as old as the human race but very little fiction has been written about it. Thank you Bryce for adding to the diversity of characters in 'Book Land'. ps: I too always thought that about Carrie (in both the book and the original film).

Well, that is some curse.

Ugh, start of another working week - thank goodness there are so many wonderful books to escape into!