Michael Warren, a twenty-four-year-old resident of Giger, finds himself at the epicenter of this horror and is stunned by the losses suffered overnight. Then the sun sets and the shadows again coalesce, growing more aggressive, the darkness eviscerating anyone it touches. 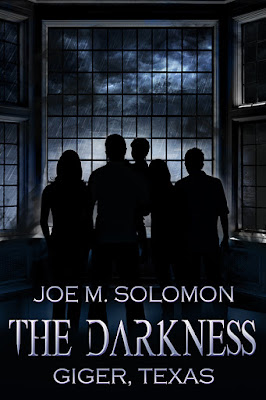 When night falls in Giger, Texas, shadows gather as they always do in dim corners and other areas bereft of light. But this time they consolidate and attack any who tread too close. Michael Warren, a twenty-four-year-old resident of Giger, finds himself at the epicenter of this horror and is stunned by the losses suffered overnight. Then the sun sets and the shadows again coalesce, growing more aggressive, the darkness eviscerating anyone it touches.

His only weapon light, Michael struggles to survive and searches frantically for his girlfriend, aiding friends along the way. When Hurricane Daniel roars ashore, wind gusts shred trees and tear down power lines, plunging all of Southeastern Texas into blackness that only feeds and strengthens the encroaching darkness. Rising floodwater provides easy thoroughfares from which the darkness can strike as Michael and his friends contend with the elements, clash with criminals, and battle their way to his residence where they will stand against the darkness and fight to survive.

Startled, Eddie blinked and wiped at his own eyes. “What was…? Hello?”

A box fell behind him.

Eddie spun around, body tight as a knot, eyes wide as their sockets would allow. “Wh-h-h-h-who the hell’s that?” he demanded with as much sternness as he could inject into his quivering voice.

Soft whispers trickled out of a minuscule pocket of emptiness near the back door on the farthest wall. There, amid the gloom, something progressed toward him. At first, its movements appeared mechanical, inelastic. Then it evolved into a smooth flow. A soft ripple. A consolidated wave of darkness.

About the author:
Joe M. Solomon earned a bachelor’s degree from the University of St. Thomas, followed by both master’s and doctoral degrees from Rice University. Joe’s supernatural thriller The Darkness: Giger, Texas released in 2017. A second novel—The Light: Houston, Texas—and a collection of short stories that arise from the macabre will soon follow.