a darkness lurking deep inside him... Wehr Wolff Castle (Wehr Wolff Chronicles #1) by B. Bentley Summers

"Wow! This was incredible! [...]
Just go read it. You won't be sorry. Between the world building, the characterisation, the pace and uniqueness of the plot and the attention to detail, to the ending and that Epilogue...it was perfection. Everything I could have hoped for and wanted when I started reading it." - Elaine, Goodreads 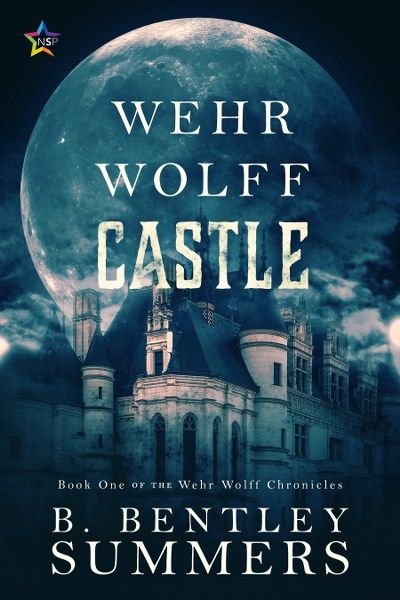 During the rise of Nazi Germany, Hagen Messer joins the Royal Air Force as an American soldier who specializes in tracking. He’s attached to British commandos and given a seemingly simple mission—to find a captive and destroy a dam—but everything goes awry. Hagen’s plane crashes into Germany’s Wehr Forest and he has to use his extrasensory abilities to track the captive to nearby Wehr Wolff Castle, a secret Nazi base where vile experiments are being conducted.

Hagen and his surviving team members must sneak into the castle and devise a way to destroy the experimental labs creating diabolical creatures. Hagen is horrified to find Nazis and scientists with no scruples, and at the most inconvenient time, he learns that he may be in love with one of his teammates, an Irishman named Liam. In order to protect his love and his friends, Hagen must feign nonchalance amidst pure degeneracy and suspicion. Hagen soon discovers, though, that he is in over his head.

What may not only redeem him, but also save his lover and friends, is a childhood past and a darkness lurking deep inside him, just waiting to be engaged.

I am into anything supernatural and any hybrid or type of vampire/ werewolf. I loved action movies such as Underworld and Blade. The romanticized and character driven film, Interview with a Vampire, was my favorite. Before these films came out though I had read Stephen King’s Salem’s Lot, Cycle of the Werewolf, and IT.

Then there’s the World War II era which had so many complexities of new emerging technologies and so many countries and people involved that it’s hard for a doctorate of history to keep track of, let alone a historian buff. Then at that time there’s the spy networks, secret agents, and double agents gathering intelligence and manipulating their enemies to get what they need. And there’s the Nazi regime with its vast armies and weaponry; but nothing is more interesting than the Nazi’s interest in the occult.

I first was introduced to Nazi’s obsession with the occult when I watched a movie called Indiana Jones: Raiders of the Lost Ark. A film that takes place in the era of Nazi Germany.

From there I started reading about the Nazi pursuit on different facets of occultism. I happened to come across the word Werwolf one day while researching. Werwolf is technically the German word for werewolf.

Werwolf it turned out was one of Hitler’s military headquarters. And second, it was a Nazi plan that began in 1944 to create a resistance force which would operate behind enemy lines as the Allies advanced through Germany. It never happened though.

This word, Werwolf, stuck with me.

I toiled with a new word and came up eventually with Wehr Wolff. I wanted to tie it to a Germany family lineage of werewolves dating to the 1500s. I even wrote a rough, very rough, first draft of how the Wehr Wolff legend began. But rather continuing with that novel I leaped a few centuries ahead and wrote about something I had been wanting do do for years – write about supernatural creatures in Nazi Germany.

So I invented Wehr Forest where everything started including ties to werewolves, actual shapeshifters.

About the author:
Bryce is a psychologist, author, and the founder of Queer Sense Theory.

Bryce's full time work is at the Veteran Affairs where he has been employed for five years. He has extensive history of working with people diagnosed with PTSD and he used these experiences when writing Fresh Meat.

The novel, Fresh Meat, recently won Dan Poynter's Global eBook Awards for best gay fiction. This piece is more than just a book, but embraces gay identity while deploring the hateful violence that happens in the U.S. prison system, and across the world. The book parallels the vicious Man-Punk prison system to the long ago abolished American Slavery System. However, Fresh Meat is not non-fiction, but fiction, and it's genre is best described as Supernatural Horror.

Rotville and The Zombie Squad, are two of Bryce's recent completions. The Zombie Squad is a teen Post-Apocalyptic Thriller that recently received Reader's Favorite 5-Stars. This novel has humor and is fast pace, that follows four teens in New Orleans who find themselves not only chased by psycho gangsters, but in the middle of zombocalypse. Rotville is a new adult/ adult Sci-Fi Post-Apocalyptic Horror that takes place in the near future, in a city called Rotville where people with a rot disease are quarantined. Inside this city is the mega prison Colleseo, where inhumane experiments are carried out on inmates. It's also the birthplace of Dylan, a super soldier who must fight his way out, save a couple of youths from the new deadly mutants, and keep from being re-caught by the greedy director.

Bryce is also the author of the fiction Young Adult Dark Fantasy/ Sci-Fi series AMEN TO ROT. The novel NYTE GOD is the conclusion to this series. The Amen to Rot series and Nyte God pit Ace and his friends against alien invaders who are turning humans into mutant creatures.

Bryce authors popular fiction with a style that entices readers of all backgrounds to consume, and makes every attempt to make his characters diverse.

As noted, Bryce does dabble in gay fiction, and pens it under B. Bentley Summers, though in truth, these works are meant for everyone to read. Bryce is the founder of Queer Sense, a theory that describes how people form attitudes. The theory provides insight into how specific components in cultural contexts shape our beliefs and values, which ultimately form our attitudes. The nonfiction book, QUEER SENSE: How Are Attitudes Formed? A Revolutionary Guide for Teens, Parents, Mental Health Professionals and Anyone Interested in Queer Theory, is due out by 2016.

Give me Nazis and the supernatural any time, it's a surefire winner. And largely true!

I like how the cover and book description. It has such a gothic feeling.

This book really sounds amazing. I love anything with mysterious creatures.

I was wondering what the author's next work will be about and when we could expect it?

I was wondering what inspired this work for the author?

Did you have to do much research to write this book?

Was wondering what the author's favorite book? author? show? movie? is.

I was wondering what the author's writing process was like?

If you book was made into a movie, who would you want to star in it?

I like the title and cover of the book. The story sounds like a creepy and exciting adventure.