"The entire book was action packed and there never was actually a boring moment.[...] The humour and sarcasm in this book made me laugh out loud at times. Unlike some other books, the jokes in the book are actually funny. [...] Overall, this book is amazing, i don't understand why how under appreciated this series is. Not many people have read it and everyone just must." - Sandy, Goodreads 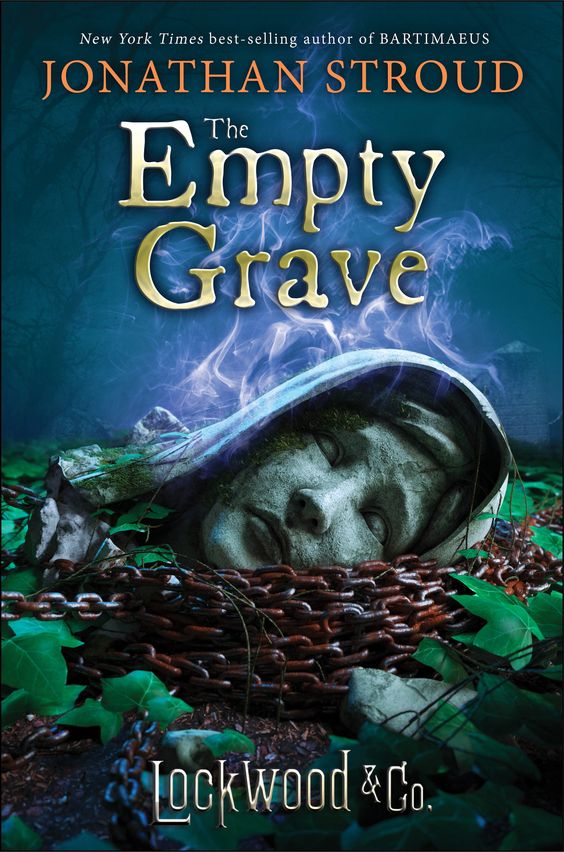 After the dramatic events of The Creeping Shadow, the Lockwood team (plus Quill Kipps) deserve some well-earned rest.

So naturally they break into the Fittes Mausoleum, on a perilous mission to discover the truth about London's top ghost-hunting agency, and its sinister leader.

What they discover will change everything.

But there's little time to ponder. A near-miss at a haunted fairground is only the start - as the Fittes agency closes in on the team, an epic struggle commences.

With the help of some unexpected, and rather ghostly, allies, Lockwood & Co must battle their greatest enemy yet, as they move ever closer to the moment when the earth-shattering secret of 'the problem' will finally be revealed.

Jonathan Stroud once again delivers a rousing adventure full of danger, laughs, twists, and frights. The revelations will send readers back to Book 1 to start the series all over again.

In its jar, poking out of the top of the backpack, the skull nod­ded amiably. “Nice one. Shut that just in time . . .” It left a significant pause. “So the inside of that flagstone’s lined with iron, is it? Lucky!”

I was already shuffling backward. Threads of white-blue ice were spreading from the center of the flagstone. As one, we retreated in all directions, bottoms bouncing, swords scraping on the ground. At the same time—as if we were pulling it on invisible strings—the ghost rose slowly through the stone. It had left its bones on the other side. First we saw the creased and cobwebbed head, the bare teeth gleaming; next the skeletal neck, then a spiraling shroud of ghost-fog. As it came, its other-light spread across the floor, fixing us where we crouched like woodlice exposed by the lifting of a log.

Somewhere near me, Kipps was trying to get his rapier clear of his belt (and failing: he was sitting on it). Lockwood, on his knees, had found a flare from somewhere. What was I doing? Continuing to retreat, because it seemed the ghost’s attention was fixed entirely on me. So I shuffled ever back, and the ghost rose ever higher, its linen-covered arms held tight at its sides.

“Eep, he’s a big one,” the skull said. It had a tone of mild scien­tific interest.

My back bumped up against the cold edge of the vault.
The shape quivered. At once, like a shark shooting forward with a twitch of the tail, it was above me.

The face of dirt and cobwebs lowered to my own. I smelled wax and grave mold, tasted the loneliness of existence underground. One emaciated arm stretched out, spectral fingers cupped toward me. Someone was shouting, but I paid no attention to it. I Listened to a harsh voice, calling from far away.

Behind the ghost, Lockwood stepped into view. He had a flare ready in his hand. “Lucy!” he called. “Roll out of the way!”

At once, the figure blinked out of existence, vanishing as if it had never been. A great pressure left the chamber; I jerked forward, my hair swinging back against my face. In the same moment, all the remaining lanterns went out, and we were plunged into solid darkness.

Someone shone a flashlight across the room. Flakes of dust were floating down around me. Cobwebs lay scattered across my knees.

“Lucy?” Lockwood was bending at my side.
“I’m all right.”
“What did it do to you?”
“Nothing. Lockwood . . .” I didn’t quite know how to put this. “Have we ever had a ghost-client before?”
He stared at me. “Of course not. Why?”
I let my head fall back against the stone. “Because I think we’ve just been given a job.”

About the author:
Jonathan Anthony Stroud is an author of fantasy books, mainly for children and youths.

Stroud grew up in St Albans where he enjoyed reading books, drawing pictures, and writing stories. Between the ages seven and nine he was often ill, so he spent most of his days in the hospital or in his bed at home. To escape boredom he would occupy himself with books and stories. After he completed his studies of English literature at the University of York, he worked in London as an editor for the Walker Books store. He worked with different types of books there and this soon led to the writing of his own books. During the 1990s, he started publishing his own works and quickly gained success.

In May 1999, Stroud published his first children's novel, Buried Fire, which was the first of a line of fantasy/mythology children's books.

Among his most prominent works are the bestselling Bartimaeus Trilogy. A special feature of these novels compared to others of their genre is that Stroud examines the stereotypes and ethics of the magician class and the enslaved demons. This is done by examining the perspective of the sarcastic and slightly egomaniacal djinni Bartimaeus. The books in this series are The Amulet of Samarkand, The Golem's Eye, and Ptolemy's Gate, his first books to be published in the United States.

Stroud lives in St Albans, Hertfordshire, with his two children, Isabelle and Arthur, and his wife Gina, an illustrator of children's books.