time was ticking - Winter in the Soul by Jennifer Novotney

From Goodreads: "Jennifer Novotney does a masterful job of describing the world she created in her debut novel, Winter In the Soul. Her rich descriptions of the sights, sounds, and smells of Spring Bloom, Summer Harvest, and Winter In the Soul give her readers a sense of being part of the story rather than simply observing it. “The sky was restless. Black and gray clouds moved at a moderate pace, exposing the dark sky and a few bright stars desperate to shine.”" 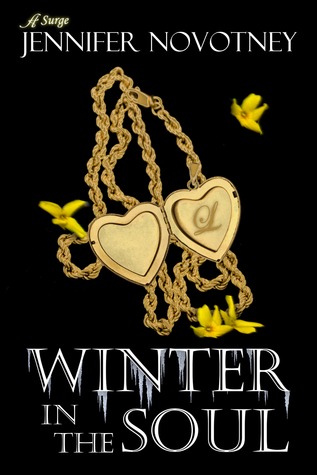 In a world divided by power and greed, seventeen-year-old Lilika harbors an intense desire to return to Winter in the Soul, the place her family left to escape the darkness that was manifesting from a coldness of the soul.

When she meets Talon, their connection is evident right from the start, and together they travel through the Black Kingdom to recover Lilika’s stolen locket. And in search of an answer to the mystery behind Winter in the Soul.

Lilika holds the key to stopping the darkness from spreading. The fate of their world lies in her hands. Will she stop the Black Kingdom before its darkness overtakes them all, or will they succumb to the darkness that is spreading across the land?

“This book is original, cleverly written and most of all a great read.”
“This novel is very suspenseful and can be enjoyed by young and old alike.”
“I really, really liked the story line, it is fresh take in the high fantasy/magic genre.”

Pulling her blond locks away from her face, Lilika headed outside her cozy house to do her morning chores. When she hit the doorway, she stopped and lifted her face skyward, soaking in the sun’s beams. She reveled in the heat beating down on her and the feeling of warmth that bathed her skin.

She walked to the garden and sat down. Lilika pulled the weeds with the sun shining on her. Her fingers ran across something smooth.

“What is this?” she muttered to herself, digging quickly to try to see just what was in there. She exposed something gleaming from underneath the brown soil.

What could be under the dirt here? She pulled out a gold heart locket from the garden bed. It glittered in an almost magical way, like nothing she’d ever seen before.

She shoved the locket in her pocket. “Okay! I’m coming.” Her little brother could be such a nuisance sometimes. She would have to wait until later to inspect her find up-close.

“Hello,” a female voice came from behind her.

“Hello?” She jumped up and turned around, shielding her eyes from the sun.

It was so bright, all she saw was a figure blocking out the light, a black silhouette outlined by the sun’s rays. As her eyes adjusted to the change in light, the figure became clearer and clearer: A beautiful, golden-hued woman stood before Lilika.

How does she know my name?

She whipped her head around. “Okay, I’m coming.” By the time she turned back, the golden woman was gone.

She stood, walked to the side of the house, and peered around the corner, but the golden woman wasn’t there. She swiveled her head to each side, but didn’t see her. Could this all have just been a figment of her imagination? Maybe sitting in the sun was affecting her. Butterflies danced in her stomach at the thought of the locket she’d found, and she hurried into the house to get ready for school.

***
The mile-long walk to school was a quiet one except for Jet humming to himself. Children said goodbye to their parents and walked out of their rural homes surrounded by lush green grass and foliage, through the center of Spring Bloom. Boys in button down shirts and long pants and girls in light colored, pastel dresses lined the walkways when Lilika and Jet got closer and closer to their destination. Lilika walked along with a solemn expression on her face.

She couldn’t help but think about the golden woman, whether she’d simply imagined her or if their conversation had really happened. What did it mean? She couldn’t tell Jet or their mother or father. They wouldn’t believe her. Something was actually happening to her for a change.

The sun cast bright light over all the individual stone cottages and gardens.

More and more residents filtered out of their houses, tending to their gardens, trimming their bushes, and cleaning windows of their homes. With every stone cottage Lilika passed, the people smiled and waved. She greeted everyone with a wave and picked up her pace once she reached the hill.

Standing in front of the school, she paused and caught her breath before opening the classroom door.

“So, do you want to do something after school? Maybe we can go for a walk or something.” Bryony stopped her just outside the door. Lilika had been friends with her for as long as she could remember.

“Oh, I can’t.” Lilika sighed. “I have to do my chores right away when I get home since I didn’t have time to do all of them this morning.”

“Well, I found something I thought you might be interested in.” Bryony pulled out a big book from her backpack and wiped the dust off of it.

Lilika whipped her head around. “What? What is that?”

“It’s called The History of Winter in the Soul.” Bryony moved her fingers along the raised gold title on the front. “It’s all about Wits.” Bryony opened it and read from the book. “It was a cold that could only manifest out of the coldness in the soul. That is how Wits got to be known as the Winter in the Soul.”

“What are you doing?” Violet butted in. Great, she was always putting her nose where it didn’t belong.

“Nothing. Keep your voice down.” Lilika glanced toward the window to make sure no one was looking. Leave it to Violet to try and join in with them when they were trying not to bring attention to themselves.

“What do you have there, Bryony?” Violet put her hand on Bryony’s shoulder to get a glimpse.

“Nothing.” Lilika shook her head.

“Well, what is it? What’s so interesting?” Violet leaned in closer.

“Oh, please,” Lilika whispered, “just stop. Someone’s going to see, and then we’ll all be in trouble. Just mind your own business and leave us alone. Go, go on.” Lilika waved her hand at Violet.

“Fine.” Violet rolled her eyes and stormed off.

“Bryony, you really shouldn’t have that book. Where did you get it anyway?”

“I found it under my parent’s bed. Aren’t you curious about Wits?”

The golden locket popped into Lilika’s head. Who was she to tell Bryony not to ask questions about Wits? She had questions of her own.

“Nothing, come on, we’d better get inside. We’re going to be late.”

Bryony shoved the book back inside her backpack and followed Lilika into school.

Jennifer Novotney was born in Burbank, California and lived in Los Angeles for most of her life until settling in North Eastern Pennsylvania with her husband and daughter. She attended California State University, earning a bachelors degree in journalism, and Northern Arizona University, earning a masters degree in English. After college, she spent several years writing and teaching, including at Pennsylvania State University.

$50 Amazon Gift Card or Paypal Cash Ends 3/22/15 Open only to those who can legally enter, receive and use an Amazon.com Gift Code or Paypal Cash. Winning Entry will be verified prior to prize being awarded. No purchase necessary. You must be 18 or older to enter or have your parent enter for you. The winner will be chosen by rafflecopter and announced here as well as emailed and will have 48 hours to respond or a new winner will be chosen. This giveaway is in no way associated with Facebook, Twitter, Rafflecopter or any other entity unless otherwise specified. The number of eligible entries received determines the odds of winning. Giveaway was organized by Kathy from I Am A Reader and sponsored by the author. VOID WHERE PROHIBITED BY LAW. a Rafflecopter giveaway