From Goodreads: "I loved this book! Jami Davenport did a fantastic job immersing us in the lives of these characters and really making us feel all that they are as we move through the story. I would highly recommend this book, and the entire Game On in Seattle series. I would suggest that if you haven't read Crashing the Boards that you do so before reading this book." 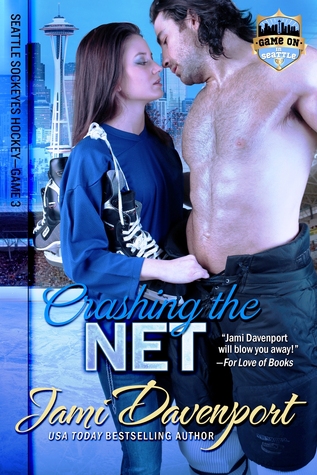 Jealous boyfriends and glitzy parties can be a recipe for disaster. When the gorgeous yet controlling Cooper interrupts a party Izzy was paid to crash and almost ruins her career as a professional party crasher, Izzy kicks him to the curb. She learned early in life not to count on anyone, and she will not relinquish her independence, not even to a sexy-as-sin pro athlete who can melt her with one wink.

As the Sockeyes hockey team opens their inaugural season in Seattle, Cooper finds himself minus a girlfriend and plus a surly teenaged nephew. Cooper doesn’t want to be a surrogate dad, he doesn’t want to play in Seattle, and he doesn’t want to be alone. He misses Izzy, but seeing her with other men at parties turns him every shade of green. Regardless, he wants her back, and he’s willing to change, if only she’ll give him a second chance. Aware of her precarious finances, Cooper makes an offer she can’t refuse by hiring her to be responsible for his nephew when he’s traveling with the team.

Fearing Cooper isn’t capable of changing his control-freak ways, Izzy resists his efforts to turn their financial arrangement into a personal relationship. He needs a sweet, docile girlfriend, and Izzy cannot be that woman. Yet, when tragedy strikes, Izzy is there when Cooper needs her the most, and love has a way of getting what it wants, no matter the circumstances.

“What are you doing here?” Izzy hissed, ever mindful their voices could carry down the hallway to anyone loitering about the ballroom entrance.

“Looking for you,” Cooper growled right back while his gaze raked up and down her body clad in a form-fitting little black dress which revealed a tasteful amount of cleavage and bare thighs.

“Cooper, I told you I had to work tonight.”

He scowled and stepped toward her, backing her up until she hit the wall behind her. He put his big hands on either side of her face and leaned in. “I don’t like you hanging out with all these wealthy businessmen and athletes who’re salivating after you like tomcats on the prowl.”

“You are a wealthy athlete,” she reminded.

“Exactly,” he responded with a grimace.

“It’s just a job.” She stared up into his stormy blue eyes, forcing herself to stay on task and not get lost in those passionate depths.

“I have more than enough money to support you while you go back to school. You don’t need to do this job.”

“I love my job.” Izzy shook her head. She would never be dependent on anyone. After all, when you couldn’t trust your own parents to provide the bare minimum basics of food and shelter, why would you set yourself up to depend on anyone else?

“I don’t.” He glared down at her, his strong jaw set and his kissable mouth drawn in a firm line. If she kissed him right now, he’d forget about everything and the situation would be defused. Until next time. She gathered her strength and did what she had to do. For herself, her sanity, and her business.

“You, buster—” she jabbed her finger in his hard chest. “Do not get a vote.”

He ground his jaw. She cringed at the thought of what that’d do to his implants if he kept it up.

“This isn’t working. I can’t live like this, not knowing where you are and what you’re doing.”

“You know where I am. I tell you what parties we’re crashing.”

“Yeah, but I worry about you.” Concern softened the anger in his eyes, but judging by his clenched fists, it still bubbled beneath the surface even as he fought to control it.

“There’s nothing to worry about.” Izzy sighed. She wouldn’t quit this job. Number one, she loved it. Number two, it supported her three younger sisters and their college tuitions. Number three, Cooper would not take away her ability to control her present or future.

“You don’t know these people.”

“I don’t have to know them. It’s not like I’m going to establish a relationship with any of them.”

“You did with me.” He pointed out the fact that they’d met at a party her company, the Party Crashers, had been hired to crash over a month ago.

“That was the only time that happened.” She lifted her head and glared at him. “Is that what this is all about? You don’t trust me?”

A muscle ticked in Cooper’s square, stubbled jaw, and his face hardened to stone. That was all the answer she needed.

An advocate of happy endings, Jami Davenport writes sexy sports romances, including her bestselling Seattle Lumberjacks football series and her new adult spinoff titled The Rookies. Jami lives on a small farm near Puget Sound with her Green Beret-turned-plumber husband, a Newfoundland cross with a tennis ball fetish, a prince disguised as an orange tabby cat, and an opinionated Hanoverian mare. She works in computer support in her day job and juggles too many balls, but she wouldn't have it any other way.

Thank you for hosting CRASHING THE NET!

Thanks so much for participating in my book blast.

<3 You're welcome! Glad to have you as guest Mrs Davenport, and Lisa, like always is a pleasure to be part of your events