16+ Blythe Sol never would have thought she would become the face of the Restoration Resistance. Yet, that is just what has happened now that the battle lines have been drawn. With the movement sweeping the United States, the stakes are higher than ever as President Drummond continues to prove his dedication to the destruction of the Bionics and all who stand with them. 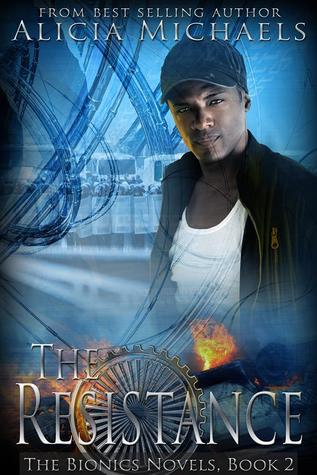 All it takes is a spark…
Blythe Sol never would have thought she would become the face of the Restoration Resistance. Yet, that is just what has happened now that the battle lines have been drawn. With the movement sweeping the United States, the stakes are higher than ever as President Drummond continues to prove his dedication to the destruction of the Bionics and all who stand with them.

The flame has been ignited…
As anger and frustration among the American people reaches the boiling point, citizens begin to fight back, many showing their support for the Bionics… despite the personal costs to themselves. As protests turn violent, and people who once cowered in silence begin to fight back, the government continues its practices that fly in the face of the very principles the nation was founded upon.

The time has come to revolt …
Despite the many losses it has sustained, the Resistance stands strong, leading America into revolution and onward toward change. With an unlikely, ragtag family of misfits at its forefront, the Resistance stands, while a girl who lost everything continues to fight for a future that was once impossible, but may now be within her reach.


The morning air is crisp and cool, the grass springy and damp beneath my feet. Droplets of water are refreshing against my bare calves as I run. My high ponytail swishes side to side, tickling the back of my neck. My chest rises and falls as I concentrate on breathing, filling my lungs with the cleansing autumn morning air. Dog lopes along beside me at a steady trot, his paws padding softly on the ground.

I have spent every morning of the last six weeks running from one end of Resistance Headquarters to the other. It spans exactly four miles. I appreciate watching the changing of the seasons each day, even if it is just a computer program. It’s nice to feel—in some ways—like we are still part of the world. When I’m on my morning run, just Dog and me, I can pretend that nothing has changed. I can almost imagine my Atlanta neighborhood with a park very similar to the one I’m running in, ringed in pine trees. I can imagine the crunching of dry pine needles beneath my feet, and smell their fragrance in my nostrils. There is no Resistance, no Restoration, and no evil president. The M.P.s have no cause to suspect a young girl out on a run with a dog, and they don’t spare her a second glance.

There is no Dax, confusing me with feelings of friendship intermixed with lust, longing, and love. There is no Jenica, staring distantly with dead eyes, quietly mourning the loss of her baby, aborted out of necessity because of the cruel nature of our society. There is no Olivia, whose night terrors now rival mine, and whose rapidly thinning frame reminds me every day of how we failed her. There is no Gage…

Actually, even in reality, there is no Gage because he’s gone. He’s gone because I cast the deciding vote. Make no mistake—I’d do it again in a heartbeat.

Reality is crueler than my fantasy. In reality, the Restoration is very much alive and in counterpoint, so is the Resistance. The M.P.s will never see me as just a girl. They fear me, what I am, and what I have the potential to become. In reality, Dax is here daily, a continuous reminder of my flaws and inability to love anyone completely, the way they deserve. In the real world, Olivia and Jenica are shells of their former selves. The former has sunk into herself and retreated from the world; the other lashes out at it with all the venom and malice she possesses.

No matter how much I want to try to imagine an alternate reality where things happened differently, I am always snatched back to the present. No matter how fast or hard I run, I cannot outrun Gage. His absence is more tortuous than his presence, when I’d thought it would be the other way around. I thought that by sending him away, I would finally be able to put my turbulent feelings behind me. Foolishly, I assumed that without having to look into those gorgeous blue eyes of his, I would no longer be a slave to my emotions when it comes to him. By cutting him out of my life, I could stop feeling so damned much. I liked it better when I was numb, when nothing fazed me because I’d built my walls and fortified myself against it all.

But then Dax kissed me and told me he loved me, and Gage made me feel like a normal person again. Together, they made me forget. But I don’t intend to forget again. I want to remember the pain that caused me to go numb, why I avoid these kinds of complications, and why I’m better off alone. At least, in my love life… I will always remember.

GoodReads ** Amazon ** Barnes&Noble
About the author:
Ever since she first read books like Chronicles of Narnia or Goosebumps, Alicia has been a lover of mind-bending fiction. Wherever imagination takes her, she is more than happy to call that place her home. The mother of two and wife to an Army sergeant loves chocolate, coffee, and of course good books. When not writing, you can usually find her with her nose in a book, shopping for shoes and fabulous jewelry, or spending time with her loving family.

This looks like an interesting read. I love a good thriller. Thanks!